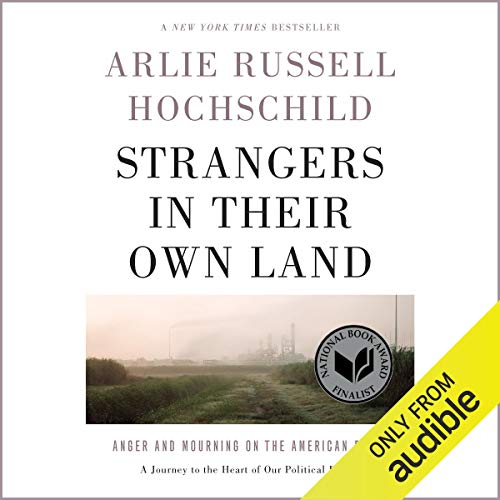 Strangers in Their Own Land

In Strangers in Their Own Land, the renowned sociologist Arlie Hochschild embarks on a thought-provoking journey from her liberal hometown of Berkeley, California, deep into Louisiana bayou country - a stronghold of the conservative right. As she gets to know people who strongly oppose many of the ideas she famously champions, Hochschild nevertheless finds common ground and quickly warms to the people she meets, among them a Tea Party activist whose town has been swallowed by a sinkhole caused by a drilling accident - people whose concerns are actually ones that all Americans share: the desire for community, the embrace of family, and hopes for their children.

Strangers in Their Own Land goes beyond the commonplace liberal idea that these are people who have been duped into voting against their own interests. Instead Hochschild finds lives ripped apart by stagnant wages, a loss of home, an elusive American dream - and political choices and views that make sense in the context of their lives. Hochschild draws on her expert knowledge of the sociology of emotion to help us understand what it feels like to live in "red" America. Along the way she finds answers to one of the crucial questions of contemporary American politics: Why do the people who would seem to benefit most from "liberal" government intervention abhor the very idea?

Well-written, but I didn't learn anything.

It was time well-spent because it covered a social terrain that I had not experienced myself. However, as I mentioned in the title, the book humanized many stereotypes I had about southern white Christians, but did nothing to alter those stereotypes.

The writer does an amazing job of creating captivating stories out of the people she interviewed. She presents them without cynicism or irony, never patronizing them, and does genuinely try to understand their views and their lives.To have such a balanced, nuanced story come from someone so strongly representing the Left was refreshing and inspiring. The stereotypes have not really been altered, but she takes great care to not make her subjects into caricatures.

Toren's performance was phenomenal. I thought she did a great job with all the different accents, but as I said above these are not regional dialects I'm familiar with. So people from that area may be offended. I don't know.

Was Strangers in Their Own Land worth the listening time?

Overall I'd say it's not really worth the listening time. Part of doing research for a piece is considering if the information you're getting is different than what people already know. Or, to say it differently, if you're adding anything new to the conversation. But anyone who spends one entire day watching MSNBC and another entire day watching Fox News will learn everything that's in this book. That said, the information offered in Appendix C is worth the price of admission alone.

On it's reprinting, this book should be retitled, "Biting My Tongue For Five Years in Contemporary Louisiana As I Watched Countless Numbers of Republicans Refuse To Recognize White Privilege While Continually Shooting Themselves in the Foot." That's kind of clunky and long though. I don't know; I'm not in publishing.

I read this book to find out why people in the middle of our country and in the South voted for Trump. That's what I found out. Along the way, it was enjoyable and entertaining.

I had already read &quot;Hillbilly Elegy&quot; and &quot;The Unwinding.&quot; Hochschild, the author and a sociologist, was able to get into the minds and hearts of people in a Louisiana bayou town. While she started as a University of California, Berkeley, professor, she also lived with these people for five years. She became friends with them and part of their community. So, she was able to open me up to understanding where these people are coming from. This is a major change in my life--now I have hope that we Americans can better understand each other.

If we are to bind up the gaping chasm between Liberals and Trump-supporters, we must understand each other. We must find common ground. I believe that there is common ground if we get to know each other better.

Must read for political moderates

What made the experience of listening to Strangers in Their Own Land the most enjoyable?

Complex issues are easy to conceptualize. The "Deep Stories" of the politically right and left were helpful in understanding and remembering the concepts of the great paradox and the empathy wall in the book.

What other book might you compare Strangers in Their Own Land to and why?

voice is easy to listen to and it was like listening to the author.

If you could give Strangers in Their Own Land a new subtitle, what would it be?

At the end of the book she forgets the ideas of staying objective with the empathy wall and provides only the politically left view in her data.

Absolutely amazing, thought-provoking, and eye-opening. I couldn't recommend it more, especially to coastal liberals trying to wrap their minds around the results of the 2016 election.

slow in the middle

What made the experience of listening to Strangers in Their Own Land the most enjoyable?

the narrator was good without being cheesy. i really appreciated the tasteful accents and narration.

what i took away from this was really the idea that liberals measure themselves as distance from the top where conservatives (especially working class/poorer groups) tend to measure themselves as distance from the bottom, which makes people think liberals just complain while conservatives are humble and grateful. really interesting perspectives presented in the book.

this book started off strong, but just dragged and dragged in the middle. once you get to the deep story part you're back in the good stuff, but there was a solid 4 hours in the middle I was just bored.

The content is thought provoking, but the narration is difficult to stick with. I listen for about an hour at a time--that's all I can take. The tone of the narrator is condescending...I imagine her saying: "...and then we observed the elusive male redneck in his natural environment... I still think her take is useful to listen to... as I find trying to keep an open mind challenging

I was so disappointed with this book. I am a little to the right of center but more left leaning on some issues, the environment being one. But the whole first half of this book is basically a diatribe against big business pollution in the guise of "trying to scale the wall of empathy." Even when she finally got to what she thought the real issue was, she framed the rest of the book in that overly simplified analogy and never bothered to explore any further.
The narrator had an arrogant, sarcastic tone whenever she read quotes from tea partyers, which just added to the complete lack of empathy the book ended up portraying. I am very interested in this subject, but it would be lovely if someone with more genuine motives would write a book on it.

Would you ever listen to anything by Arlie Russell Hochschild again?

This book was described in that I did not think I would hear the deep-liberal overtones, inflections and sarcasm of the mostly conservative residents of the deep south. But, it's all over the book. I skipped around after an hour or so; I was really hoping for an unbiased analysis. Not to be. Maybe it was the way the narrator read it, but I believe this author's background could never allow her to present a fair, indiscriminate view of the land and people where I grew up.

After Trump won, I decided I needed to read more about the white America that I never talk to. I started with this book because it was recommended by the Director of the National Book Foundation, but immediately ran into a serious flaw in that recommendation: it's written by a UCBerkeley professor. She talks about the empathy wall, but here I am trying to reach across that divide and doing it by means of somebody well entrenched on my side.

The biggest problem I had with this as an audible experience is that the reader has a seriously pretentious accent. What is that? It's not any accent I've encountered in real life. It's some performance projection, but undermines the content. One of the conclusions the author reached in her study of right wing Southern Republicans is that their feelings are hurt by what they perceive to be the disdain the left has for their lifestyle, priorities, and voting. I think the author makes an effort to balance her disagreement and to express her gratitude for their hospitality and willingness to talk to her, the tone of the reader in this audio version is so bizarre that it reinforces the sense that the liberal elite fancies itself superior to "real" America.

The author focuses on one thing and only one thing: environment. I have nothing against environmental protection. However, talking a single issue is not how you do a social study, especially on a much larger topic like "red America". At least, please make it clear in book title and introduction. I bought the book hoping I could learn something from a broader and more comprehensive perspective. How disappointing!