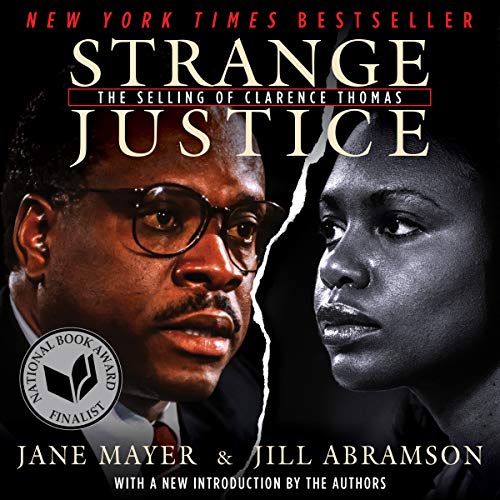 Charged with racial, sexual, and political overtones, the confirmation of Clarence Thomas as a Supreme Court justice was one of the most divisive spectacles the country has ever seen. Anita Hill's accusation of sexual harassment by Thomas, and the attacks on her that were part of his high-placed supporters rebuttal, both shocked the nation and split it into two camps. One believed Hill was lying, the other believed that the man who ultimately took his place on the Supreme Court had committed perjury.

In this brilliant, often shocking book, Jane Mayer and Jill Abramson, two of the nation's top investigative journalists, examine all aspects of this controversial case. They interview witnesses that the Judiciary Committee chose not to call and present documents never before made public. They detail the personal and professional pasts of both Clarence Thomas and Anita Hill and lay bare a campaign of lobbying, public relations, and character assassination fueled by conservative power at its most desperate. A gripping high-stakes drama, Strange Justice is not only a definitive account of the Clarence Thomas nomination hearings but is also a classic casebook of how the Washington game is played by those for whom winning is everything.

Amazing book made me relive both the shameless Anita Hill saga and the recent similar treatment of Christine Blassey Ford. I feel Kavanaugh learned/modeled his shameless outburst on the equally false one by Thomas so many years ago. Thanks to Mayer & Abramson for all the wonderful research they put into this account of the truth.

Thank God Me To Opened The Flood Gates!

Pass the Equal Rights Amendment To The Federal Constitution. Show us we count! Don’t leave it to States who will probably still ignore women’s rights, but will at least give us a dog in our fight. Love this book and others like it, Under The Flowers Moon, Where The Crawdads Sing, The Undertaker and the Country Dentist. Excellent narration. I’m sending this book to friends and family. Clarence Thomas is just another example of why big money politics will disregard the fatally flawed attitudes toward women in favor of a financial agenda, at the expense, long suffering of American women. So many people knew Anita Hill was honest, and Thomas a dangerous degenerate. Why does he have so much power? His legal decisions continue to control every woman, to their detriment, and satisfy his rage filled contempt of them. Anita told them so. Joe Biden helped hide the truth she told. Biden was part of the cover up. All of this type of manipulation has to be exposed, and every perp must be removed from their positions of power and control.