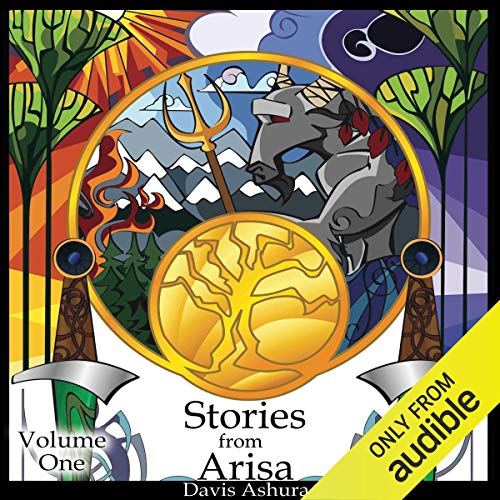 Stories from Arisa: Volume One

Arisa: a world of loss and hardship; of legend and wonder; the world of A Warrior's Path. Return there now with Stories from Arisa, a short story collection featuring four wonderful new fables from that mythic place; each one a polished gem; together, an assemblage spanning the realms of hope, humor, tragedy, loss, and love.

The Baels of the Eastern Plague have fallen away from Hume's teachings. It is Li-Dirge who finds leadership thrust upon him. He must challenge the SarpanKum and return his brothers to the path of fraternity.

The House of Fire and Mirrors. The Fort and the Sword. Both are Kumma military academies and fierce rivals in the city of Ashoka. The Wrath is the annual competition between the two schools, deciding bragging rights for the next year, but it is the Prank that dictates who laughs last and longest. This year, it is especially important for Rukh, Keemo, Farn, and Jaresh.

Rector Bryce is called upon to investigate a missing diamond. The thief is not at all who he would have expected.

I fully expected that there would be closure or at least a continuance of Jazeera and Rukh's story. there is still so much that i want to hear about Arisa. for example... Defiance. Suwraitth is gone but there was still so much unexplained at the end you could write two more books about it. here's hoping that happens because the trilogy was fantastic.

This was a must have for me...

As a fantasy author, I can truthfully say that Davis Ashura is one of my favorite fantasy authors. I'm so glad I discovered this series. SFA is a collection of short stories that give greater insight and depth into the world of Arisa and many characters you might not get as much face time as you would like in the full length novels. Each of the 4 stories delivers comedy, intrigue, action, or just plain good thought-provoking prose. I both listened to and read these collection. Nick Pohdel continues to be a perfect match as a voice for this content. If you're a fan of the Castes and the OutCastes, Stories From Arisa is a must have! You'll find yourself wanting to go back and re-read the series to see where all these stories fit in to the overarching plot.

time I will never get back

I thought this might tie some loose ends together and at least somewhat transition into a Testament of Steel. It does neither.

It has a few stories that are all unfinished. It wasn’t worth me using one of my credits on since it was a little over an hour long. I should have paid attention to the length before I used a credit. The narrator is amazing as always. The stories were getting good but all just ended.

I loved the full books and thus felt i wanted to try this. It does tie the knot on some of the events from previous books but it's way too short, would even say so short that it's not worth the coin unfortunately.

what do you value?

full disclosure that I have just binged all the Davis Ashura books on Audible. I love the way he writes and I love Nick's performance. In fact, one of the main reasons why I started listening was because of Nick Podehl. so this review is after listening to

It's hard to say that this "book" is expensive when I am using audible credits however when one credit can buy me between 15 and 48 Hours of listening it is really difficult to justify one credit for about 1 hour especially when the first story is something that was touched on in the first three books. I was hoping it would give me some sort of background but these are more like skits. like I said I have no problem supporting this author in fact that is how I justify it it to myself. any Series where I am willing to blast through 8 bucks is a good sign and if it takes one credit to stay in that world for one hour longer I am willing to do that.

as interesting and entertaining as this book of skits or short stories are I would have much preferred Davis writing The Book of the First Movement or Book of All Souls. There is a lot that he can do with those two bucks especially if they are in narrative form to provide interesting stories and context to the current characters arcs and motivations.

I do appreciate these short stories but as someone else said they seem like outtakes or things written but not originally included when the book was released or recorded. they would have extended the book however for those of us who like this world that Davis has created it would have been a nice added story.

So to sum things up the writing is as good as all of his books and the performance is amazing as always but this appointment only comes from using one credit for one hour when all of you know one credit can stretch so much further it is hard to justify unless you have read all the books and are waiting for the new one to come out and this is the only way you can get more stories while you wait. I mean even Aleron Kong had Nick read a couple chapters of his upcoming book over Instagram. that free reading to the public was almost as long as this for one credit. it would have done a lot if he had just given this out for free. Who knows if Davis had given it out for free over Audible he might have gotten even more people to listen to his other books because it's a pretty good sample of his writing style.

Fairyland and other places

I wish I could go to the places books describe but you know what they say about wish’s in one hand and the stuff in the other . I was disappointed when I finished A Warriors Penance because I thought that world had ended, then I found The Stories from Arisa . Then I rose up and followed the Warriors into the low hills. T. B.

Not much point to the book

Seems like a compilation of chapters that weren’t good enough for previous books. No rhyme or reason. A waste of $3.79
Love your other books though, Davis
Nick is always great.

Generally I don't like reviews of short stories that say they are too short. Seriously, what do you expect? But I have to make an exception here because these stories are too short, even by short story standards.

Most of them are so short that they lack depth, particularly the one featuring Rector Bryce. I wish Ashura had fleshed out one or two stories even a little, rather than including 4 tiny ones. They had promise, and I like the idea of learning a little more about Arisa. My favorite of the 4 was the one about the baels, which did show some depth despite its length.