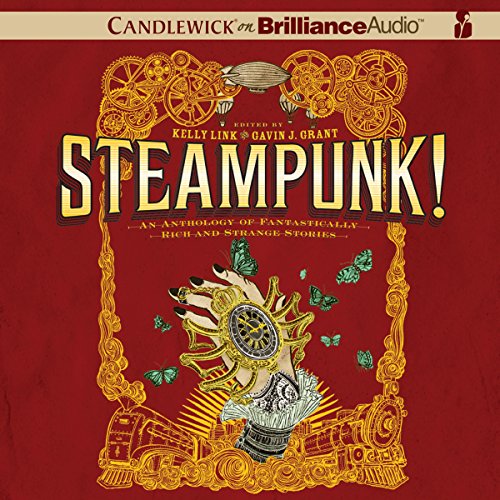 Steampunk! An Anthology of Fantastically Rich and Strange Stories

Imagine an alternate universe where romance and technology reign. Where tinkerers and dreamers craft and recraft a world of automatons, ornate clockworks, calculating machines, and other marvels that never were. Where scientists and schoolgirls, fair folk and Romans, intergalactic bandits, Utopian revolutionaries, and intrepid orphans — decked out in corsets, clockwerk suits, and tall black boots — solve dastardly crimes, escape from monstrous predicaments, consult oracles, and hover over volcanoes in steam-powered airships.

Here, in the first major steampunk anthology for young adults, fourteen masters of speculative fiction, including two graphic storytellers, embrace the genre’s established blend of sci-fi and fantasy, action and adventure, history and romance, and refashion it in surprising ways and in settings as diverse as Canada, New Zealand, Appalachia, Wales, ancient Rome, future Australia, and alternate California. Visionaries Link and Grant have invited all-new interpretations, explorations, and expansions, taking a genre already rich, strange, and inventive in the extreme and challenging contributors to remake it from the ground up. The result is an anthology that defies even as it defines the genre. With fantastically strange stories by M. T. Anderson, Holly Black, Libba Bray, Shawn Cheng, Cassandra Clare, Cory Doctorow, Dylan Horrocks, Kathleen Jennings, Elizabeth Knox, Kelly Link, Garth Nix, Christopher Rowe, Delia Sherman, and Ysabeau S. Wilce.

It amuses me that Audible offers questions for a reviewer to answer that either aren't relevant to the book or to my experience of it. Anyway... You won't find any stories in this anthology to be particularly groundbreaking, but you will find some fun here. It's a great distraction for those who already love the Steampunk genre, and a decent first read for those looking to get their feet dirty.

A few of the stories just didn't grab me, and that's to be expected as the editors need to appeal to a wide variety of listeners.

The stories I liked, I truly loved and continue to think about.

Where does Steampunk! An Anthology of Fantastically Rich and Strange Stories rank among all the audiobooks you’ve listened to so far?

Among anthologies I would say second. I enjoyed Dark and Stormy Knights the most. This is a collection of all kinds of steampunk with a twist not one story takes place in england. Among steampunk genre i guess it would be second behind Mark Hodder Burton and Swinburne Trilogy.


What other book might you compare Steampunk! An Anthology of Fantastically Rich and Strange Stories to and why?

this is a collection of steampunk which is kind of historical sci-fi. I started listening when audible did a little feature on it and I was hooked. It combined my favorite genres historical fictions, mystery, sci fi, fantasy. Other novels like it are the previously mentioned Burton and Swinburne, The Strange case of Finley jane. Leviathan trilogy, and the agency of strange occurrences.

All the narrotors did a great job of conveying the feeling of what was going on. Since all the stories were about strange circumstances you want to hold your breath like what is happening next.

Thats the beauty of steampunk, it can be scary, romantic, funny,fantastical, thought provoking, hopeful, dreadful, realistic, unbeleivable all rolled into one.

my favorite stories were the ones by Kelly Link, Sean Cheng, and Kathleen Jennings.

Calling it Steampunk means nothing

These stories have very little to do with Steampunk aesthetics or attitude. They are mostly negative in tone with a heavy handed social message. Not worth it.

Not as good as I hoped

I really don't know what I was expecting when I was going in, but I know it wasn't this.

REALITY GUN
I try to get to know all the different sides to Science Fiction. I thought that Steampunk would be something I would be interested in. Out of the four Steampunk Novels I read before this Anthology, I only really liked one. I liked Scott Westerfield's Leviathan. An anthology is a good place to find authors I am interested in and I found five stories that I really liked, so now I have five authors to check out. Those authors are Cassandra Clare, Cory Doctorow, Ysabeau S. Wilce, Kelly Link and Dylan Horrocks. The last author wrote Steam Girl, which was a great story. Kelly Link's Summer People was very different and very good.

Like all anthologies there are some stories that just don't measure up and I found about five of these. As a whole this only gets three stars, but if I find an author to follow that will be worth a galaxy of stars.

Having the different narrators helps also. Most of them were really good, although there was one girl who must have gone to the Scott Brick school for over acting.

What a fabulous collection of stories! my only complaint, it ended too soon. excellent readers as well as wonderful stories from my favorite authors!

I really & truly enjoyed every story in this anthology. I was in the mood for steampunk & I also wanted to get more short story anthologies read this year so it seemed perfect to get & read. Every narrator is perfectly chosen & every writer featured is a brilliant choice by the editors. 5/5 definitely one to grab if you love steampunk but want more than just Victorian London!

Leaves you in the dark on almost every story. Do not waste you time it doesn't get better.

some good stories and some not so good

What made the experience of listening to Steampunk! An Anthology of Fantastically Rich and Strange Stories the most enjoyable?

The anticipation of what strange thing would happen next.

If you’ve listened to books by the authors before, how does this one compare?

No some of the stories were good, but no emotional action.