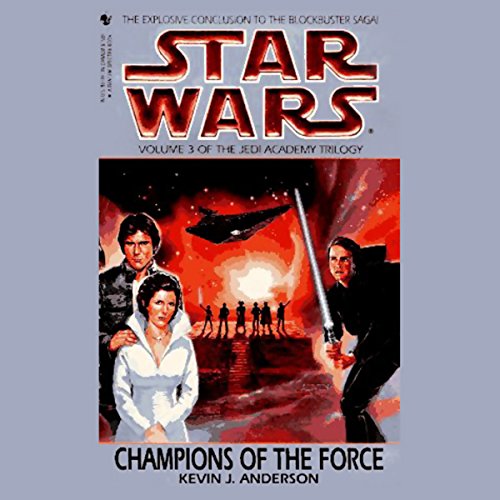 Suspended helplessly between life and death, Luke Skywalker lies in state at the Jedi academy. But on the spirit plane, Luke fights desperately for survival, reaching out physically to the Jedi twins.

At the same time, Leia is on a life-and-death mission of her own, a race against Imperial agents hoping to destroy a third Jedi child - Leia and Han's baby Anakin, hidden on the planet Anoth.

Meanwhile, Luke's former protégé, Kyp Durron, has pirated the deadly Sun Crusher on an apocalyptic mission of mass destruction, convinced he is fighting for a just cause. Hunting down the rogue warrior, Han must persuade Kyp to renounce his dark crusade and regain his lost honor. To do it, Kyp must take the Sun Crusher on a suicide mission against the awesome Death Star prototype: a battle Han knows they may be unable to win...even with Luke Skywalker at their side!

"Anthony Heald, the consummate reader, does an excellent rendition of this modern classic. His abilities elevate him above all others. Reproducing the character voices with great effectiveness, his voice, enhanced by sound effects, keeps the listener riveted. This action-filled, well-paced performance is worth listening to over and over." (AudioFile)

Great story, but narrator ruins it for me

Great story, but bad narration with multiple mispronunciations. Coruscant is pronounced "CorusKant", Han Solo sounds like a 1940's gangster, and Wedge Antilles sounds like Scotty from Star Trek. Very distracting after hearing the amazing Mark Thompson in so many great readings.

Really shows the growth of Luke and his abilities in the force.

Everything. He doesn't know how to pronounce words that any Star Wars fan would be able to pick out right away, and every character sounds nothing like you would imagine or remember them sounding like. Mark Thompson needs to narrate all of the books that Anthony Heald has narrated.

The narrator is mediocre. He does not pronounce names correctly. At times he speaks almost too fast to understand him, other times he's on the verge of slurring his words. Some dialog is said with the wrong personality and character which comes across as odd.

The overall quality of the narration is marginal. Getting past the above mentioned issues, the book is understandable and is easy to follow.

Anthony Heald proves again that he knows absolutely nothing about Star Wars and isn't worthy of reading these novels. His pronunciation of CoruSCANT, PalpaTINE, and Exar KUOON were maddening. The ridiculous Scottish/Sean Connery accent he gave Wedge Antilles was absolutely atrocious. To top it all off, he speaks so quickly that all emotion and energy is lost while you simply try to decipher exactly what he's saying! I'd demand a refund and give this book negative stars if I could just because of him. I'll never buy another book with him.

I'm not saying the narrator doesn't read well. His character voices are TERRIBLE!
It makes it hard to understand who is saying what sometimes.
Does this guy know ANYTHING about Star Wars? Or care? He mispronounced so many things!
Unfortunately he's narrated a lot of Star Wars books and just keeps mispronouncing things!
Who has ever said Coris-cant??
When a character is meant to sound "excited" like during an emergency situation, he makes them nasally and whiney sounding.

Has Star Wars turned you off from other books in this genre?

Would you be willing to try another one of Anthony Heald’s performances?

If you could play editor, what scene or scenes would you have cut from Star Wars?

I think that could be the problem...too much editing.

I am still suffering from this one. In all honesty, I was so bored by this trilogy that I am considering giving up Star Wars novels altogether. I went ahead and listened to the whole trilogy hoping that it would get better. It did the opposite. This last book was less than brilliant and I really struggled just to get through the whole thing.First off let me say that my feelings are not clouded by the narrator, who by the way, was awful, awful, awful. As someone else said here, he came across as someone who had never heard of Star Wars before reading this trilogy, but even worse, he paused in the middle of sentences as if not sure where he was going. He also had terrible mispronunciations of common Star Wars names and places, all of which I could live with if the story is good. This was not. My main trouble in reviewing this story line is that I can’t tell if it was a drudgery to listen to because it was an abridgement, or if it was just bad writing. The fact that the author used the word “sour” about 30 times throughout this trilogy to describe, well just about everyone’s facial expression at some point or another, simply grated on my nerves. I’m not a writer, but I do believe that a creative writing instructor would have asked Kevin J. Anderson to try to come up with at least one alternative to this. The characters personalities seem off too, as in Han Solo pouting like a child, or Luke Skywalker acting like a scared teenage boy. This made the story seem foreign, and actually disappointed me in the characters. But my main complaint is that there were times when I had to ask myself what was going on, or how did that character get to that position in the story. I felt that I had to imagine what must have taken place in order for that character to take a particular action. Very frustrating. Unfortunately, I’m not impressed by Mr. Anderson’s work here, and really can’t see why he gets all the accolades that he does. Again, perhaps I’m not being fair, since this was an abridgement. I’m returning all three, and IF they ever publish this as unabridged and cast Marc Thompson as narrator, I might consider giving it another try.

Don't. Don't think you can get past the way the narrator constantly misprounences names, planets, and gives Wedge and Scottish accent.

His pacing, voices, and this being the abridged version, make this something I regret listening too.

Heald is getting better!

This read was one of his better ones Ive played so far. The character inflections are still not where they probably should be IMO, as the characters still all sound the same, male or female. But he did tell the story (abridged as it is) very well IMO.

I don't think the narrator has ever seen star wars

the story is AMAZING, I loved it all. but the narrator is terrible. he mispronounces almost all the names of the planets throughout the trilogy, and he also changes the voices for the characters in the B- plot several times. He used his normal voice for Wedge for the first book, but thought the second and third he flips back and forth between that and some poorly done Scottish accent several times a chapter and sometimes even halfway though a sentence.

They should seriously reconsider having someone else tell the story. Preferably someone whom has actually seen Star Wars and can correctly pronounce character and planet names. How incredibly embarrassing, totally botched a great story with a clown of a narrator.