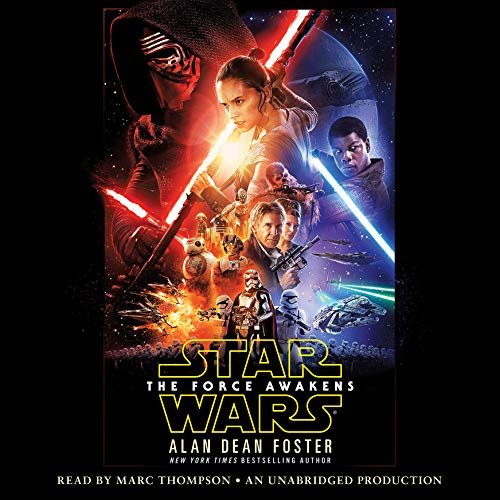 More than 30 years ago, Star Wars burst onto the big screen and became a cultural phenomenon. Now the next adventures in this blockbuster saga are poised to captivate old and new fans alike - beginning with the highly anticipated Star Wars: The Force Awakens. And alongside the cinematic debut comes the thrilling novel adaptation by New York Times best-selling science fiction master Alan Dean Foster.

Set years after Return of the Jedi, this stunning new action-packed adventure rockets us back into the world of Princess Leia, Han Solo, Chewbacca, C-3PO, R2-D2, and Luke Skywalker, while introducing a host of exciting new characters. Darth Vader may have been redeemed and the Emperor vanquished, but peace can be fleeting, and evil does not easily relent. Yet the simple belief in good can still empower ordinary individuals to rise and meet the greatest challenges.

So return to that galaxy far, far away, and prepare yourself for what happens when the Force awakens.

Just finished : what a Great immersive experience with music and familiar sounds
Even voices are well done...except Kylo Ren’s but it would be difficult I admit
Now I jump into light speed ....towards The Last Jedi !

AS AMAZING AS THE MOVIE, IF NOT BETTER ❤

This novelization is awesome, I've just found out about it and couldn't stop playing it! I can't wait for The Last Jedi to come out in audiobooks as well to get more details about Rey and Ben

Adds a bit to the Movie

If you enjoy star wars you will enjoy this .However i would recommend watching the movie first as the emotions have more impact when seeing on the faces of the actors for the first time . The great part of this novelization is that it has all the bits from the movie plus extends quite a few scenes and dialog as well as contain some that were probably cut from the movie. No spoilers i promise one of the additional scenes has one of chewies coolest actions ever.

Narrator.
Marc Thompson is always good and for anyone who has heard his chewie voice don't worry a much better. voice has been dubbed in

Even better than the movie.

Even better than the movie. Gives great insight on all key characters. Well worth the listen

Great listen after watching the movie

Would you listen to Star Wars: The Force Awakens again? Why?

Of course, That's why I bought it and didn't rent lol.
I'm not a big fan of dramatized audiobooks, but this one walked the line perfectly. great sound effects when appropriate.
The movie had to cut some scenes that are included in the book, that's the main reason to read the book...or you can wait for the extended version of the movie on Disc (you know it's gonna happen).

What other book might you compare Star Wars: The Force Awakens to and why?

2 sittings, but honestly I walked around alot while listening.

It's worth the money, it's like watching the movie but without people in costume sitting next to you :)

Listen to this AFTER you see the movie

Absolutely. A few scenes are extended and (of course) give more detail on the thoughts of the characters. But even better are the scenes that are included which were not included in the movie.

What was one of the most memorable moments of Star Wars: The Force Awakens?

Again... go see the movie before listening to this audio book.... but then after that, get this book and listen. Marc Thompson, as always, does an incredible job of really sucking you into the moment.

I have seen a review or two that claim this book adds nothing new if you've seen the movie and nothing could be further from the truth. Obviously there are no new twists that dramatically change things here, but it is in the subtle differences and additions that the book brings that will give you a bit more depth and insight not only to a number of the characters, but also to the overall story line.

The movie was good, but this book probably is even better.

A fantastic production, the story, just the movie

Marc Thompson did an EXCELLENT job. His voices and acting were so well done, very expressive and easy to follow! Little sound effects that are known to be in Star Wars audiobooks make this a fun read too.
I was disappointed by the lack of additional information that I thought the novelization might provide. I almost got the impression that JJ Abrams said to Alan Dean Foster that he shouldn't go much beyond the screenplay. There are some scenes in this book that I assume were edited out of the final cut, but are here in the book, which is fun too. I have read other novelizations that have more densely filled in thoughts and some background/back story more effectively. This felt like a simplistic book with a few ten dollar words thrown in. An example of a fabulous novelization was Revenge of the Sith by Matthew Stover. He filled in the many, many gaps left by an overly-edited movie and actually made the story better than the movie had been (not hard to do, I grant you). This novel did not make much of an effort to do that. I'm just glad I listened to this and didn't just read it.

overall, this was quite enjoyable. Well paced and well written. Extra bits are nice cause they add some depth and fill in a few gaps that didn't make it into the movie. BB-8 effects were a welcome surprise!

Good narration, although it can be a little jarring as some of the lines were delivered by their on screen counterparts in a way that wasn't necessarily reflected in the novel.

One thing though, the soundtrack is taken from the prequels and a few times the Anakin/Padme love theme is used and it just doesn't fit. it would be nice if they'd have been able to get the Force Awakens music.

What did you love best about Star Wars: The Force Awakens?

Excellent production, very layered. Marc did a fantastic job. The sounds, from a laser to the atmosphere were absolutely engulfing

fantastic story, brings back the OT feel. the book is definitely a great addition to the film. you discover things not stated in the film

I enjoyed the movie very much. I had great hopes for the book. There is nothing wrong with the book, as best I can tell, and it seems to fill in many gaps that were left out of the movie. I'll probably get the Kindle version (if available).

However, I've only made it 11 minutes into Chapter 2, and I'm not sure I'll be able to finish the audio book. The performance is awful, IMHO. The narrator is sooo melodramatic. He sounds like all the worst old radio dramas ever broadcast all rolled into one. The background music and sound effects are fine, and maybe they add to the story, but the rest of the performance was just too over the top for me.

I almost laughed out loud when the guy started reading the "Galaxy far far away..." bit, but when I discovered that he was apparently going to read the whole book in that style, I quickly lost my sense of humor. This style might be more appropriate for a children's bedtime story ("... and he HUFFED and he PUFFED, and he BLEW THE HOUSE DOWN!!!"), but it is a bit much for serious fiction. I've been an Audible subscriber almost as long as there has been an Audible, and this is the worst narration I can recall.

Just a great FUN listen! Like the movie? LISTEN!!!

Would you consider the audio edition of Star Wars: The Force Awakens to be better than the print version?

Of course this is better... it is a performance!

Exaggerated? Yes But it's a Star Wars book... it's supposed to be bigger than life.

This is an ideal companion piece after seeing the movie. Got to relive it and brought a smile to my face. If you liked the movie and you want to have fun all over again then listen to this. The music and effects just enhanced this listen. If you don't like that kind of stuff you will probably not like it. Being a Star Wars nerd, I liked it all.

Great performance but doesn't add to the movie.

The narrator and production values of this audio book were great, among the best I've heard on Audible. However, I was expecting the story to add a bit more to the movie. To add more deleted scenes and help me learn more about the characters and Star Killer Base etc. Apart from a few extra scenes of Princess Lea and one where we learn how Poe got off Jaku everything was more or less exactly what was in the film. It still gets four stars from me because I love the film!

This book helped to tide me over until the DVD comes out, but I probably won't listen again.

The background SoundFX have been nice but are quite destraktiv and sometimes to loud. In one light saber fight the sound clashing sound goes on for far too long after the moment they stopped fighting. I prefer audio books without sounfFX. Music thoug was really cool Id liked to have the original movie soundtrak.

The book is very obviously targeted at a young audience. Unfortunately it doesn’t capture the rapid-fire pace that made the movie so fun.

Star Wars - what more can I say

Good restart of Star Wars - even if you know the movie, you learn a few more details from the book.