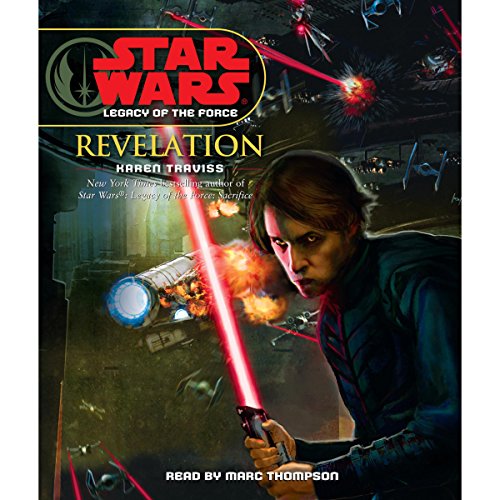 During this savage civil war, all efforts to end Jacen Solo's tyranny of the Galactic Alliance have failed. Now, with Jacen approaching the height of his dark powers, no one - even the Solos and the Skywalkers - knows if anything can stop the Sith Lord before his plan to save the galaxy ends up destroying it.

Jacen Solo's shadow of influence has threatened many, especially those closest to him. Jaina Solo is determined to bring her brother in, but in order to track him down, she must first learn unfamiliar skills from a man she finds ruthless, repellent, and dangerous.

Meanwhile, Ben Skywalker, still haunted by suspicions that Jacen killed his mother, Mara, decides he must know the truth, even if it costs him his life. And as Luke Skywalker contemplates once unthinkable strategies to dethrone his nephew, the hour of reckoning for those on both sides draws near. The galaxy becomes a battlefield where all must face their true nature and darkest secrets, and live - or die - with the consequences.

Well worth the money!

I've been a huge Star Wars fan since I was kid and saw the original movie for a friend's birthday party on May 29, 1977, but I don't think I'll be buying any more SW books...

A) The abridged versions are terrible. A big part of the SW universe is the description, most of which is cut out in the abridgement.

2) The current and future books are all in nine-or-ten part series. It seems like the authors and publishers are just stringing the readers along... A single story from beginning to end costs well over $100.

If you could sum up Star Wars in three words, what would they be?

If you’ve listened to books by Karen Traviss before, how does this one compare?

This series is written well enough it it hard to distinguish between the authors. That's how it should be

I love the Expanded Universe

Yes I know it is called Legends now or what not but I still prefer this to the story arc disney has plagued the Star Wars universe with now. All of the fantastic story telling truly resonates with me as characters have been developed and grown over time. I look forward to the time when this Expanded Universe and the Cinematic Universe finally coalesce and the journey can finally continue as it should have.

I love these books (read them all before) and I absolutely LOVE the narrator, who does excellent work. I just REALLY wish they had the unabridged versions.

I hate these abridged versions of this series. Please release the unabridged versions. Things just seem to randomly happen. Characters just appear places they shouldn't be based on the story that's being performed. If we had the missing parts we'd have been understanding of everything that's going on.

loved it, great story and mark Thompson is the best reader for audio books I have a hard time listening to anyone else

Exceptional conflict between good and evil!

Love the goodness of humanness woven into the tapestry of Starwars: Legacy of the Force, Revelation

Exciting book filler in the series

In this book there are lots of battles. But it seems a bit dragged. Not much or something really major/ plot-changing happened. I wish they developed more Jacen to appear as a stronger sith. They just here and there mention his capabilities and tricks but overall he seems he is constantly failing or people get disappointed by him and start plotting against him. Though as the book says, the latter isn’t something surprising for a sith but expected.
In the war, Jacen becomes more sadistic and ruthless though he found a new apprentice in the ex of his dead brother - Tahiri Veila. Everybody tries to dethrone Jacen, while he tries to find new allies in the Mofs and Imperial Remnants. Ben tries to find proof that Jacen killed Mara. And Jaina realises she can’t kill or bring down her evil twin so she needs to learn some new skills. For this she turns to Boba Fett.