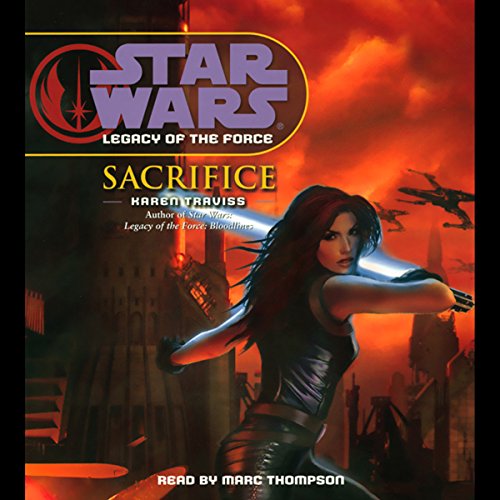 Civil war rages as the Galactic Alliance, led by Cal Omas and the Jedi forces of Luke Skywalker, battles a confederation of breakaway planets that rally to the side of rebellious Corellia. Suspected of involvement in an assassination plot against Queen Mother Tenel Ka of the Hapes Consortium, Han and Leia Solo are on the run, hunted by none other than their own son, Jacen, whose increasingly authoritarian tactics as head of GA security have led Luke and Mara Skywalker to fear that their nephew may be treading perilously close to the dark side. But all Jacen wants is safety and stability for all - and he's prepared to do whatever it takes to achieve that goal.

As the strands of destiny draw ever more tightly together in a galaxy-spanning web, the shocking conclusion will shatter two families and cast a grim shadow over the future.

A great series! Keeps your hungry for more!

This is a true Star Wars Universe story in its purest form. It's all excitement from the beginning to the end. And I'm now looking forward to continuing the "Legacy of The Force saga.

I hate these abridged versions of this series. Please release the unabridged versions. Things just seem to randomly happen. Characters just appear places they shouldn't be based on the story that's being performed. If we had the missing parts we'd have been understanding of everything that's going on.

one thing I dont get is why they made mara and Luke seem like bad parents that couldnt control their own kid and let a 13/14yo tell them what he was going to do. idk I dont like that or understand that part of this story.

Such a Drastic Improvement Over Exile

Where does Star Wars: Legacy of the Force #5: Sacrifice rank among all the audiobooks you’ve listened to so far?

Probably the best so far. Despite some plot points that just make me angry, this is one of the best audiobooks I've listened to.

Would you be willing to try another book from Karen Traviss? Why or why not?

Of course! I find her to be one of my favorite Star Wars writers, so I'll probably be picking up her Republic Commando series soon!

Everything! Thompson is so great, and combined with the sound effects and music, he's really what makes these worth the audio format.

Not really, mostly because I don't have 6 and a half spare hours to listen to audiobooks. I have to space out my reading. 15 minutes in the car on the way to work, during lunch while I eat, etc. I have no doubt this would be something I could binge read.

There is a certain story point. One that I won't spoil, but one that understandably upset a majority of the Star Wars audience when they read, or at least found out, what happened. It's something that makes me angry, and a total waste of a character.

A more positive note is the relationship between Mara and Ben. Father's are the central theme in Star Wars (at least in stories involving the Skywalkers). So it's nice to have a mother/son relationship being more developed. Of course Luke is still here, but it's made abundantly clear that Ben has a more loving and focused relationship with his mother, and I really wish that was in here more.

Also, I love how Traviss basically undoes the last novel. She shows Mara being pissed off with Luke's hand gesture with Lumiya bullcrap at the end of Exile, she nearly avoids all mention of Ben's trip to Ziost and whatever that amulet was, and while that weird Sith ship is still present, she at least makes it (somewhat) more interesting.

The production values are back to where they were in the first few novels, the story is getting more interesting, the tide is turning with these characters, and despite me not being able to take the way Jacen pronounces his new name seriously, I'm looking forward to what's coming next!

This is the 5th book in this story line, it is more story than action and the action in good just not great. But between Jason and -Fet they more than carry this book.

the best of a great series

The LOF series is a fantastic one to begin with. The narrator does a fantastic job of pulling you in. Sacrifice is the best out of the series, with and ending that will make you immediately want to hear the next tape in the series.

A bit slow to start, but strong finish. Some parts lost my attention. I felt much of the action was taken out due to the audio being abridged.

This story was an amazing tale of the rise of darth Caedus. it was emotional and very compelling. it was really just an amazing book!

the narrator was perfect as always. marc Thompson is a master of his craft and really brings the story to life. Being a fan of Star Wars is even better when I can hear the stories under his interpretation and skill. A brilliant piece of art.

Overall this book is darker with more targeted killings. This time some sith artifacts and challenge/ test is set for Ben to be sith material. The book ends with a dark episode for Jacon. I’m a bit surprised of the logic behind it and couldn’t believe what happened because I didn’t expect it.
Still weirdly made cuts between the chapters otherwise awesome voices and sound effects and music.