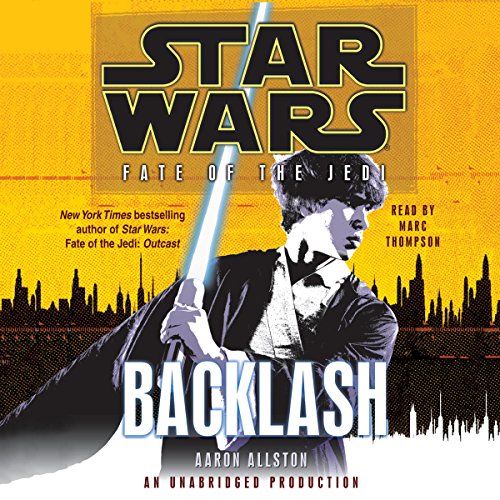 Repercussions from the dark side's fatal seduction of Jacen Solo and the mysterious plague of madness afflicting young Jedi continue to wreak havoc galaxy-wide. Having narrowly escaped the deranged Force worshippers known as the Mind Walkers, and a deadly Sith hit squad, Luke and Ben Skywalker are in pursuit of the now masterless Sith apprentice. It is a chase that leads to the forbidding planet Dathomir, where an enclave of powerful dark-side Force-wielders will give Vestara the edge she needs to escape - and where the Skywalkers will be forced into combat for their quarry and their lives.

Meanwhile, Han and Leia have completed their own desperate mission, shuttling madness-stricken Jedi from Coruscant to a safe haven in the Transitory Mists and beyond the grasp of Galactic Alliance Chief of State Natasi Daala. But the bold maneuver has intensified Daalas fury, and she is determined to shatter Jedi Order resistance once and for all.

Yet no greater threat exists than that which still waits in the depths of the distant Maw Cluster: a being of pure, ravenous dark-side energy named Abeloth calls out across the stars to Jedi and Sith alike. For some it may be the ultimate source of answers crucial to their survival. For others it could be the ultimate weapon of conquest. But for all, it is a game-changing and life-altering encounter of untold magnitude and a tactical gambit with unimaginable consequences.

More in the Fate of the Jedi series we have. And listen to all of our Star Wars titles you can!
©2010 Aaron Allston (P)2010 Random House

good for the type

the narrator also had a big work to making a present audio.

I really liked the audio-back version of Backlash. March Thompson really helps bring the story to life with his impersonations of the various characters. His Luke Skywalker and Han Solo voices are pretty dead-on and really sound like Mark Hamill and Harrison Ford, making them truly sound like the characters.

His characterizations of the Sith, the Dathomiri, The GA officials, Imperial officials, and other characters give a sense of the story that just reading the book the normal way does not.

I'd highly recommend any Star Wars audiobook who has Marc Thompson as the narrator/character voices.

Halfway through fate of Jedi series and it's awesome! Can't wait to finish the rest of it!

loved it. to hell with disneys cannon. this will always be my cannon. legands my ass

Ready for the next!

I wish it didnt end but I'm happy for the next one and M.T. has been one of my favorite readers

holy shit this book is amazing

if you love star wars you'll love this.

I've read this series a few times before, so it great to listen for a change. marc Thompsons narration is the best 👌

the story is reaching a turning point

it's a little heavy handed in galactic politics at times, but we're nearing the climax.

Poorly directed voices. History of the EU characters do NOT match the voices used. Kyp Durron was a Corellian former slave and they make him sound like he was raised in the core worlds and went to the imperial academy. He should sound like a more grown up version of Ben or maybe closer to Han. Kenth Hamner and the Mon Cals sound exactly the same. I am impressed with the distinction between children, females, Han Solo, Luke Skywalker, Leia, and Jaina. Great Story and I really loved the pacing. This book is never dull.

Luke and Ben have tracked Vestra Kia to Dathomir. There she quickly joins a Witch Clan for protection. Having called his Aunt and Uncle for help Ben Skywalker has brought Han, Leia, and Allana. The Dathomir subplot is suburb. It was nice to see the gang back together. On Coruscant things grow even worse. Dala sends the Mandolrians into bring the Jedi “in line”. The battle in the temple is awesome. Again many of my favorite characters get moments to shine. Jaden Corr. Rynar Thul gets an awesome but small role in this one. Zekk. And once again that’s just naming a few. Also loads of new With Nightsisters on one side and the possibility of Sith on the other things are excellent in this novel. The darkness is coming. Aboloth has emerged.... Reviewed in 2020. #giveuslegends

love these books wish they would get the full series on here soon please. but well worth it