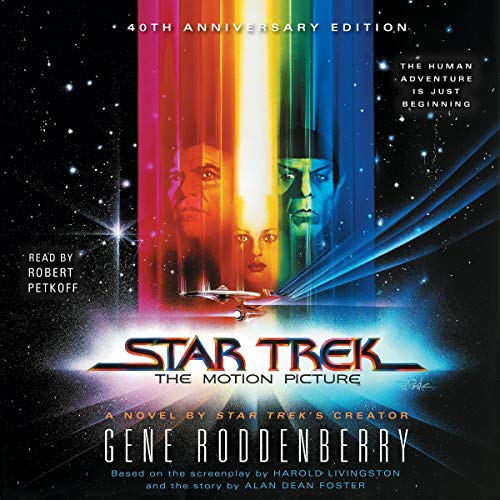 A novel by Star Trek's creator Gene Roddenberry - based on the screenplay by Harold Livingston and story by Alan Dean Foster.

The human adventure is just beginning.

The writer-producer who created Mr. Spock and all the other Star Trek characters - who invented the Starship Enterprise, who gave the show its look, its ideals - puts it all together again here in his first Star Trek novel!

Their historic five-year mission is over. Kirk, Spock, McCoy, Scotty, and all the crew have scattered to other jobs or other lives. Now, they are back together again on a fabulously refitted USS Enterprise as an incredibly destructive power threatens earth and the human race.

Really enjoyed this audio adaptation of the original novel of Star Trek The Motion Picture. It brought out a depth to the story and the relationships. I hope it's not the last adaptation of a movie or original series novel produced. Well done to all involved and thank you

It was very interesting, and the reader did well with the voices of the characters!

It was a beautiful movie. A beautiful novel. And very well performed in this audiobook. I love the detail that is in the book versus what was in the movie. Any fan of Star Trek absolutely needs to read and or listen to this audiobook.

Star Trek as it was meant to be...by the creator.

This is Gene Roddenberry's Star Trek. Pure and (not so) simple. Everything else is fan fiction. Beautiful.

A great story and good introduction into The Star Trek Universe

I wanted to read/listen to this book because I always have liked Star Trek and the movie to me was just kind of eh ok at best so I was hoping the book might be a little better. The book was good; it explains a little bit better of what V Ger is and what’s exactly going on. Also; I read a lot of other reviews and have to agree that the book also gives a little backstory on where these characters are now and also a little bit more on Kirk. The film I feel like they rushed it and the book takes a little more time setting things up and allowing the reader to understand of what’s going on and why it’s happening. I liked it and I think if you are someone who’s never read or seen any Star Trek I think the book overall does a good job welcoming you into the Star Trek Universe. I think you as a reader will overall like this book and I would recommend it for people wanting to be entertained and enjoy a good story. I’ve always felt that books were better than their prospective films; a readers imagination is a fabulous creation and your brain gives you a fantastic front row performance. The narrator also does an amazing job with the character voices so he kind of makes it easy for you to enjoy and it’s a great listen. You often at times (at least I found it happening for me) that the narrator does such an amazing job that you can really picture the characters in your mind speaking and talking and it’s very enjoyable. There are some good and bad voice actors and sometimes they can either really help the book or put you to sleep. Overall a great job and I really enjoyed listening to him. Really hope you enjoy this book as well and encourage you to keep going; there are many delightful Star Trek books out there....

petkoff made this story better.

the story is just not as good as other modern trek books. petkoff, however, was outstanding as always

Very pleased with this production

I read this novelization years ago when it was first released in conjunction with the feature film, but had not revisited it until I listened to this audiobook version. I enjoyed this every bit as much as I did the first time I read the book. Robert Petkoff delivers a masterful performance as narrator. He brings the essence of the original cast’s voices to bear. I was especially impressed with his voices for Kirk, Scotty and Chekov. I think he’s an ideal choice to voice Star Trek audiobooks moving forward. Highly recommended.

It was great going back to one of the first Star Trek novels I ever read besides the old log books. It’s one of my favorite trek films

Really captured the story. Added to the lore really well plus gave movie more weight by filling some glaring plot holes. It was great to get into the mind of Spock, Kirk, and even V'ger itself.

the story was done very well.

the story made sense out of the movie. I was pleased with the performance and the story. I would recommend it to any trekkies. the first star trek movie novelization that I found thought provoking and enjoyed.