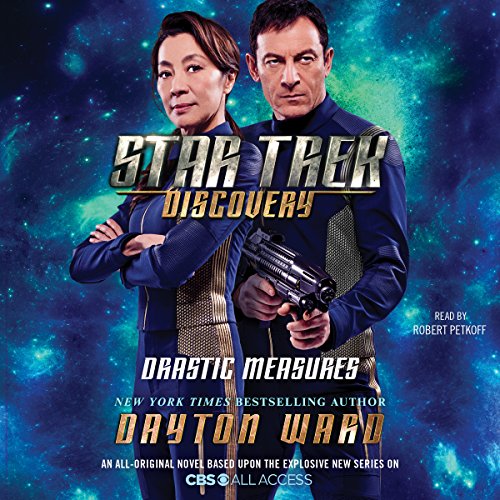 An original novel based upon the explosive new Star Trek TV series on CBS All Access!

It is 2246, 10 years prior to the Battle at the Binary Stars, and an aggressive contagion is ravaging the food supplies of the remote Federation colony Tarsus IV and the 8,000 people who call it home. Distress signals have been sent, but any meaningful assistance is weeks away. Lieutenant Commander Gabriel Lorca and a small team assigned to a Starfleet monitoring outpost are caught up in the escalating crisis, and bear witness as the colony's governor, Adrian Kodos, employs an unimaginable solution in order to prevent mass starvation.

While awaiting transfer to her next assignment, Commander Philippa Georgiou is tasked with leading to Tarsus IV a small, hastily assembled group of first responders. It's hoped this advance party can help stabilize the situation until more aid arrives, but Georgiou and her team discover that they're too late - Governor Kodos has already implemented his heinous strategy for extending the colony's besieged food stores and safeguarding the community's long-term survival.

In the midst of their rescue mission, Georgiou and Lorca must now hunt for the architect of this horrific tragedy and the man whom history will one day brand "Kodos the Executioner"....

Where does Star Trek: Discovery: Drastic Measures rank among all the audiobooks you’ve listened to so far?

This is one of the best Star Trek books I have listened to. I think Dayton Ward is a Genius.

What was one of the most memorable moments of Star Trek: Discovery: Drastic Measures?

I really enjoy the connections to other stories.

Have you listened to any of Robert Petkoff’s other performances before? How does this one compare?

Dayton Ward has written a story that intertwines seamlessly with existing canon. He didn’t over do the fan service while still telling a story that keeps you excited to hear more.
Robert Petkoff’s performance is amazing as always. Nobody does Star Trek better these days. A+

This story gave a fantastic view into one of Phillipa and Lorca's early experiences in Starfleet. We got to see them respond to a tragic and high stakes incident. Unfortunately, the performance was dry.

Phillipa was heroic, intelligent, and compassionate, helping others through direct medical care and even performed a daring rescue. It was great getting more of the Prime version of her considering how early she died in the show. It's easy to see why Michael and Saru respected and admired her so much.

This is the first time we actually get Prime Lorca at all, so it's fascinating to compare him with Mirror Lorca. While this version of Lorca is on the side of good, he is still violent, prone to outbursts of righteous anger, and willing to break protocol when he sees fit. I can easily see this version of the character making similar choices that Mirror Lorca did on the show, but for good reasons.

I also find it interesting that the last chapter shows Lorca in prison being held by unknown individuals in a violent culture with him having no idea how he got there. It seems clear that the book is setting up the reveal that Prime Lorca is still alive and being held prisoner in the Mirror universe. If I'm right, that will be an excellent twist for next season.

Getting my Star Trek Fix

I just barely started reading Star Trek Novels. I needed something to hold me over between Season 1 and Season 2 of Discovery and these books have been awesome. Although Desperate Hours is my favorite one so far, I loved Drastic Measures.

Great book. Superb narration. Highly recommend for all Star Trek fans! The events of Tarsus IV have been brought to life.

Dayton Does it Again

Petcoff is perfect for Star Trek narration. Dayton's love of the franchise comes through but never overwhelms. Listen after the credits for a glorious Easter Egg.

What a great story!

Dayton Ward does it again. Takes a character from a classic TOS and reveals a great story. If you love TOS and Discovery, this one is for you!
Also, how about that Post credit scene? No spoilers!

loved it. the story answers a lot of questions. it flows perfectly and makes for a great and pleasurable listen.

Very good story! Fills in a lot of Discovery's backstory behind the characters and their relationships. The only negative I have is that these don't use sound effects and music like the Star Wars audiobooks do.

besides the already multiple times used theme of the Holocaust, this was by far the flattest and worst Startrek book I have ever heard of.
there ain't no episodes of any series so boring and flat as this one either.
after the first discovery book wich I really liked this is absolutely not worth the time to read. the story if any book will relate to this should have rather be explained within half an hour.

missing everything that is crucial for a good star trek. no parallel lines. no fantasy. no real further back round information. no game changes. no turns in the story. even though I really tried to think myself into the story with the known or unknown discovery Charakters, this could play on Earth anywhere anytime and is far off any SciFi.