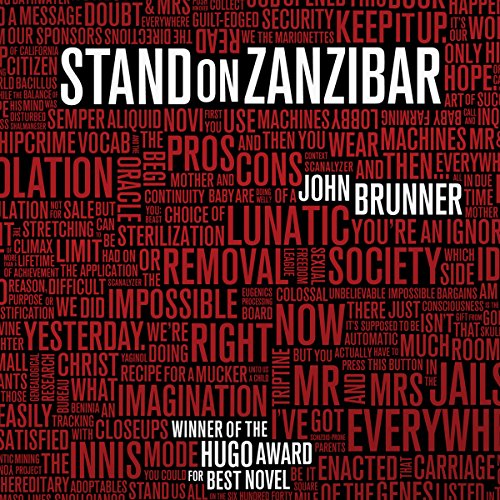 Niblock House is a rising executive at General Technics, one of a few all-powerful corporations. His work is leading General Technics to the forefront of global domination, both in the marketplace and politically - it's about to take over a country in Africa.

Donald Hogan is his roommate, a seemingly sheepish bookworm. But Hogan is a spy, and he's about to discover a breakthrough in genetic engineering that will change the world...and kill him.

These two men's lives weave through one of science fiction's most praised novels. Written in a way that echoes John Dos Passos' USA Trilogy, Stand on Zanzibar is a cross-section of a world overpopulated by the billions. Where society is squeezed into hive-living madness by god-like mega computers, mass-marketed psychedelic drugs, and mundane uses of genetic engineering. Though written in 1968, it speaks of now, and is frighteningly prescient and intensely powerful.

this is one of the best novels I've listened to. it is less scifi to me than i would have thought, and not dated and reads more like Pynchon. while it may not be of the poetic density of Moby, this narrator coupled with this material, makes for a superb listen. Great narrator, one of the best. Wonderful slang and word play. This novel is a scattershot type structure, with multiple blasts of images and ideas--more ideas than a dozen current pop novels.

the story itself involves our near future (written in 1968 it predicts 7 billion people by 2010 and we are near that) and concerns to an extent overpopulation and corporate greed with side stories involving genetic engineering and sterilization and computer intelligence but don't get caught up in arguing whether he got all the "predictions" accurate. He's much more concerned about people existing in such a possible world and what they might go through. Poverty, drug abuse etc.

it will be helpful to know that it is structured with "rotating" sections, i took this from wiki entry:

"Continuity" – Most of the linear narrative is contained in these chapters.
"Tracking with Closeups" – These are similar to Dos Passos's "Camera" sections, and focus closely on ancillary characters before they become part of the main narrative, or simply serve to paint a picture of the state of the world.
"The Happening World" – These chapters consist of collage-like collections of short, sometimes single-sentence, descriptive passages. The intent is to capture the vibrant, noisy, and often ephemeral situations arising in the novel's world. At least one chapter of the narrative, a party where most of the characters meet and where the plot makes a significant shift in direction, is presented in this way.
"Context" – These chapters, as the name suggests, provide a setting for the novel. They consist of imaginary headlines, classified ads, and quotations from the works of the character Chad C. Mulligan, a pop sociologist who comments wryly on his surroundings[3] and in one chapter, actual headlines from the 1960s.


a key line from opening: "A point of view can be a dangerous luxury when substituted for insight and understanding." Marshall McLuhan: The Gutenburg Galaxy

loved it. going on my list of best novels. hoping for Sheep Look Up and Shockwave Rider now, definitely interested in Brunner more.

In spite of the obvious places where he missed, the accuracy of some of the predictions of 2010 (written in 1968) are astounding.

Witty and entertaining and in many aspects prophetic story of 21st century politics, science, dilemma of eugenetics and consumer lifestyle. Some of this has happened already and clash with China is certainly looming ahead. And all along tongue in cheek. Not at all aged 1968 book a delight. With amusing sidestories in interlacing chapters making easy listening in small doses. Highly recommend to SF fans but also a good example of witty science fiction for the doubtful or novice - few chapters of confusion in the beginning to a non SF reader not used to neologisms. So be warned.

Seen any muckers in the news lately?

This book is still very relevant today. It is far more social fiction then science fiction.

Quite good, if dated

I read this book about 6 times when I was in high school (1968-1972). The word "multimedia" didn't exist then, of course, and it can't apply to a print book. But this book is as close as a book can come. The way in which the plots are intercut and perspective shifts is truly amazing. But the author's future is now our (recent) past, and the degree to which the author simply extends the social and political realities of 1968 into the future is painfully obvious. The attitude toward women is painful to read now. But it has always been a great read.

A little dated, but still a good story

Would you listen to Stand on Zanzibar again? Why?

Probably not. I first read this as a young man in the late '60s or early '70s and wanted to see how it held up, since it's set in 2010. While some of Brunner's story is fairly prescient, i.e. he predicted Viagra and other

The character development. Brunner was very good at putting you inside the heads of a wide variety of characters with different personalities and goals. I like that.

Read the novel and take some notes before starting to narrate. There were weird inflection and timing issues, i.e. something like

Christ, what an imagination I've got.

A little difficult to first get into due to the writer’s style. However, this is a book - and ideas - well ahead of its time.

They say the world changed in 1968. This book is one writers attempt to determine what 2010 would look like given those changes. The author gets a shocking number of things right in this dystopian view of the future.

eerily accurate in its predictions

I don't know how else to put it. The book pretty accurately describes life now. The author hut home on so many of his predictions of our lives that its haunting.

Great ideas, not a great fan of characters and sto

Not a bad book, I love sci fi and I really appreciated the authors interpretation of a eugenics focused future. Personally though, abd this is only my opinion and applies only to me, I felt the lack of depth in female characters lwft me with few people to relate to. I also felt alienatwd by the times it seemed the (always male) main characters were living out a sexual fantasy instwad of having an interesting, 2 sided interaction with a woman. Lot of "perfect body" stuff for men and women, except for the off characters like Chad Mulligan