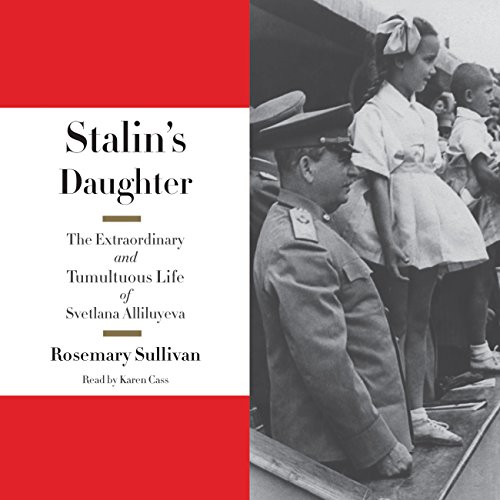 The award-winning author of Villa Air-Bel returns with a painstakingly researched, revelatory biography of Svetlana Stalin, a woman fated to live her life in the shadow of one of history's most monstrous dictators—her father, Josef Stalin.

Born in the early years of the Soviet Union, Svetlana Stalin spent her youth inside the walls of the Kremlin. Communist Party privilege protected her from the mass starvation and purges that haunted Russia, but she did not escape tragedy—the loss of everyone she loved, including her mother, two brothers, aunts and uncles, and a lover twice her age, deliberately exiled to Siberia by her father.

As she gradually learned about the extent of her father's brutality after his death, Svetlana could no longer keep quiet and in 1967 shocked the world by defecting to the United States—leaving her two children behind. But although she was never a part of her father's regime, she could not escape his legacy. Her life in America was fractured; she moved frequently, married disastrously, shunned other Russian exiles, and ultimately died in poverty in Wisconsin.

With access to KGB, CIA, and Soviet government archives, as well as the close cooperation of Svetlana's daughter, Rosemary Sullivan pieces together Svetlana's incredible life in a masterful account of unprecedented intimacy. Epic in scope, it's a revolutionary biography of a woman doomed to be a political prisoner of her father's name. Sullivan explores a complicated character in her broader context without ever losing sight of her powerfully human story, in the process opening a closed, brutal world that continues to fascinate us.

I enjoyed this book and learned so much about the early years of the USSR and Stalin’s family. I am always appalled every time I read the numbers of death in Russia from the famine in the 1930 to the number of dead in WWII.

Svetlana grew up in the Kremlin surrounded by adoring relatives, governesses and tutors. Her mother committed suicide when she was 6 years old. Svetlana was born in 1926; she lived through the purges, war and the disappearances of most of her relatives into gulags. Her first love, Aleksey Kaples was sent to a labor camp when Stalin learned of their courtship. Her half brother Yaakov, with whom she was close, died in a German P. O. W. camp after Stalin refused a prisoner of war exchange. I was most interested in Svetlana’s meeting with Winston Churchill when he came to meet with Stalin during WWII. Churchill noted her red hair and told her he had also been a redhead when he was young.

In 1967, fourteen years after Stalin’s death, Svetlana defected to the United States. Her life reads like a clock and dagger suspense spy thriller. She had three children from three of her four failed marriages, published several books, made money and lost it. She moved constantly unable to stay in one place very long. She died at age 85, nearly destitute in Wisconsin under the name of Lana Peters. I found her comments about Putin most interesting and that she thought the United States was most naïve about Russia.

Rosemary Sullivan is an eminent biographer. I enjoyed her biography of Margaret Atwood. The book is well researched, and Sullivan maintains a neutral view of the troubled life of Svetlana. Sullivan allows the reader the freedom of their own interpretation. The book is fairly long at 20 hours; Karen Cass does a good job narrating the story.

The most famous Soviet defector.

If you could sum up Stalin's Daughter in three words, what would they be?

What other book might you compare Stalin's Daughter to and why?

I can think of no comparison to make.

What aspect of Karen Cass’s performance would you have changed?

Having another narrator intirely.

Poor Svetlana went through so much in her life.

Would you try another book from Rosemary Sullivan and/or Karen Cass?

I will never listen to Karen Cass again.

The narrator needs to slow down and enunciate. She mushes words together at a rapid pace, lowers her voice so that words are inaudible, increases the volume and pitch when speaking in character. Really, a quite bad performance.

When I tell people about the life of this woman, they ask me if it is fiction. This woman's life traversed so many worlds and eras of history, I don't want to spoil any of it. Absolutely worth a listen/read.

This book is made unique by Svetlana’s private letters, interviews with Russian relatives and American acquaintances, opened KGB dossiers, and cooperation from her American daughter. It is an interesting subject not heretofore written about with a lesson that life has trajectories, watch where you’re heading. I’m glad I read it. Sullivan fleshes out Svetlana Alliluyeva (nee Svetlana Josifovna Stalina) so the reader comes to know her. The author makes much use of personal correspondence, some of which isn’t particularly important. Given access to it Sullivan seemed loath not to use it. About mid-point Svetlana’s letters are the forward motion of the book. But, that’s a piddling comment. By and large, Sullivan defines the life-arc of Svetlana the wanderer, emerging from a dark place, the daughter of head dungeon master, chasing contentment the rest of her life at her own and other’s expense. There are moments of sunshine but her story doesn’t end happily. The woman’s potential simply melted away like a tablet in water.

A synopsis: Svetlana’s life was a chase after externals—human, religious, and geographical—to find fulfillment. She lived the classic rich kid syndrome albeit with a fine intellect and no drug use. She was emotionally off-balance, pushed and pulled by whims, having no idea of money’s worth until it was gone. She was what Americans used to call a “flibbertigibbet,” with a Slavic tang Despite her cleverness she was extremely impulsive, often a romantic patsy. She wasn’t loved and cherished as people should be except, perhaps, by her first husband (who she divorced after having a child, then moving on) and her final, American-born daughter. She was never an drinker, never a boorish hag, never a seeker of publicity, but on the contrary was warmhearted, honest, charming. She spoke English, French, German, Georgian and Russian. She wrote English well. She taught literature at Moscow University although she ultimately spurned academics. After she defected she burned through a million-and-a-half dollars from U.S. book deals. She gave much of it away and was pathetically swindled out of the bulk of what remained. Meanwhile, the two children she abandoned in Russia resented her leaving and never re-established warm relationships with her. Svetlana was brought to ground by old age: penniless, living in a series of charity houses in England and the United States. By that time she wore second-hand clothes from thrift shops, used a walker, cooked in a communal kitchen . . . sad, sad, sad. Thank goodness for Social Security checks and her youngest daughter, Olga, for whom she sacrificed to send to private schools. In her last interview in an old folks’ home Svetlana said, “Stalin damaged my life.” But disentangling causes of her fate is more complicated than that. There are strands from her father’s influence, her own impetuous and stubborn personality, the emptiness of immigrant disconnection, and the anti-materialism of Soviet culture; all constellated to produce an outcome. As he approaches her end readers will think to themselves, “Oh no. Svetlana, as smart as you are, why did you make those choices?”

I started out with a lot of sympathy for Svetlana Stalin but ended up thinking her just a willful person who had to have everything on her own terms. Maybe if she had been required to get a job she wouldn't have had so much time to self obsess.
The author did a really great job pulling this tumultuous life together into a coherent story.

aAfascinating, and very well written and superbly narrated account of the life of Stalin's daughter. She was a highly intelligent and complicated person but always likable.

This is a FANTASTIC story, always fascinating and interesting. The reader can get difficult to understand from time to time, but it doesn't detract from the story.

The book is lengthy so it is worth it

Narrator seemed biased in her tone and a little irritating but it is a complicated book and she helped with her tone to clarify details so my assessment is mixed.
Great history lesson interesting perspective on what was happening then.

I thought her beautiful British accent made the story most intriguing . I would recommend this story to anyone interested in history!