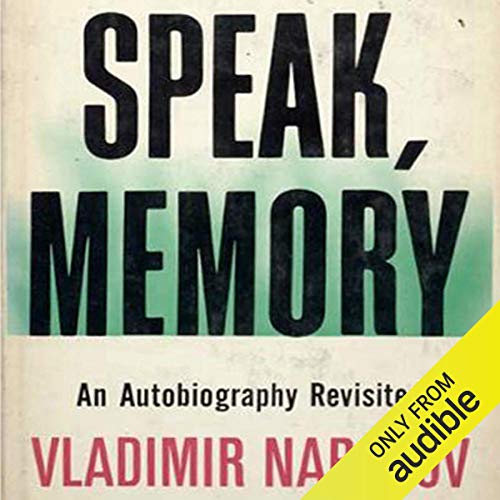 From one of the 20th century's great writers comes one of the finest autobiographies of our time. Speak, Memory, first published in 1951 as Conclusive Evidence and then assiduously revised in 1966, is an elegant and rich evocation of Nabokov’s life and times, even as it offers incisive insights into his major works, including Lolita, Pnin, Despair, The Gift, The Real Life of Sebastian Knight, and The Luhzin Defense.

One of the 20th century’s master prose stylists, Vladimir Nabokov was born in St. Petersburg in 1899. He studied French and Russian literature at Trinity College, Cambridge, then lived in Berlin and Paris, where he launched a brilliant literary career. In 1940 he moved to the United States, and achieved renown as a novelist, poet, critic, and translator. He taught literature at Wellesley, Stanford, Cornell, and Harvard. In 1961 he moved to Montreux, Switzerland, where he died in 1977.

"Beguiling and superbly produced, this bittersweet rendition will appeal to lovers of Nabokov and those experiencing their first taste." (AudioFile)

this inspired me to read Nabokov's novels

a beautifully written biography that captures much of Nabokov's life with particular reference to his childhood. From this perspective Nabokov's perceptiveness and remarkable memory give the listener a unique prism from which to view the unfolding of his own life and those around him. Small details like the muff that his mother raises to her face to keep out the cold as she is drawn along by the sleigh take on an importance equal to many more weighty events drawn by the story.
Because it is told from the point of reference of an emigre, looking back to a world in Russia now almost entirely gone,
there is a poignancy in much of what is related,
Some of the people who inhabit the story sadly never survive the political turmoil and revolutionary wars. In a sense the writer pays homage to these people, some of whom seem remarkable, but swept away by a tide of historical change.
I would have chosen a different narrator for this particular story, but otherwise it was a delight, and has inspired me to pursue this author's works in greater depth.

This book is amazing, not for the story it tells but for how that story is written. It consists of essays written and published at different times and places, but it all holds together. Each chapter follows the other in basically chronological order. Let the author speak for himself:

For the present final edition of Speak Memory I have not only introduced basic changes and copious additions into the initial English text, but have availed myself of the corrections I made while turning it into Russian. This re-Englishing of a Russian reversion of what had been an English re-telling of Russian memories in the first place proved to be a diabolical task, but some consolation was given me by the thought that such multiple metamorphoses, familiar to butterflies, had not been tried by any human before.

The book covers the years from his birth in 1899 to 1940, when he, his wife and son immigrated to the US. It begins with his Russian boyhood, followed by his émigré years in Europe. It covers his tutors, his passion for butterflies, a bit about his synesthesia, his coming-of –age, his first girlfriends, his writing and poetry. You clearly understand where he came from, but that is NOT the glory of the book. What is astonishingly good is how he describes memories. What a vocabulary! Words, words and more words. Adjectives and unusual verbal constructions. It is magical. If you want simple wording, I guess this is not for you though.

Since what is so stupendous about the book is the writing, I must offer you another sample. It is at the end of the book when he is soon off to America on an ocean liner. He is walking with his wife and six year-old son up a path in a park in Paris, and they spot the boat:

What I really remember about this neutrally blooming design( the park) is its clever thematic connection with transatlantic gardens and parks. For suddenly as we came to the end of its path you and I (his wife) saw something that we did not immediately point out to our child, so as to enjoy in full the blissful shock the enchantment and glee he would experience on discovering ahead the ungenuinely gigantic, the unrealistically real prototype of the various toy vessels he dottled about in his bath. There in front of us, where a broken row of house stood between us and the harbor and where the eye encountered all sorts of stratagems, such as pale blue and pink underwear cake-walking on a clothesline or a ladies bicycle and a striped cat oddly sharing a rudimentary balcony of cast iron, it was most satisfying to make out among the jumbled angles of roofs and walls a splendid ship’s funnel showing from behind the clothesline as something in a scrambled picture. Find what the sailor has hidden that the finder cannot un-see once it has been seen.

I am writing what I have listened to in the audiobook version of this book, which is well narrated by Stefan Rudnicki, in a deep tone perfect for Nabokov’s words. The narration has just the right pomp!

I LOVED the book, but it might not be for everyone.

Probably one of my favorite autobiographies to date (beaten only perhaps by the Education of Henry Adams). Realistically, it is 4.56 stars given the narrative gaps (most were written as individual pieces for Atlantic Monthly, the New Yorker and Harpers). The section on butterflies (Chapter 6), his Russian education (Chapter 9), and his portrait of his mother (Chapter 2) were absolutely AMAZING. Other chapters were just as good, and only a couple were less than what I hoped. It is interesting to think of Nabokov writing these in English in Massachusetts from his Russian memories and then translating them in the 1950s back into Russian and then using the Russian version to edit a new edition in 1966. The human mind, with all its varieties, is an phenomenal thing...but Nabokov's mind and the prose it produces makes me want to just lay down and lick the back of my own head in jealousy.

Yes. I love Nabokov, so I may be a bit biased, but this book illuminates so much more than just a man and his life, and more than just his life's work. It is filled with insight into many aspects of life. It's also a very interesting history told through a wise and eloquent lens.

Which character – as performed by Stefan Rudnicki – was your favorite?

Stefan's voice seems perfect for every aspect of this book. I very much enjoyed it.

Chapter 11 section 2. A simple but beautiful notion about life, art, and the artist.

What disappointed you about Speak Memory?

What is it about Russian writers who extol their heritage, their lineage? I could not care less how fancily Nabokov was raised and who is lofty ancestors were. I used to love Nabokov when I was a kid and read just about everything he wrote, but now, in my old age, I think he's a gloating windbag.

Has Speak Memory turned you off from other books in this genre?

I won't be reading a poetic autobiography again.

What character would you cut from Speak Memory?

Skip this book unless you are an absolute devotee.

I wish the narrator was different

Nabokov is a Master of words, the memoir itself is beautifully written, but I regret spending the money on this audiobook. Let the narrator's Slavic surname not fool you - he butchers Russian names and titles hopelessly. Of course, if you are not familiar with Russian, it wouldn't be a problem, but I couldn't help but cringe every time.

I would hire a different performer, such as Jeremy Irons, who did such a fantastic job reading Nabokov's novel Lolita.

Nabokov's autobiographical comments are genuinely fascinating and insightful. I really like the text of this book.

Nabokov's book contains many comments that are ironic, tongue-in-cheek, sly, mischievous, self-doubting, wistful, or just plain funny. Rudnicki reads though all of them with an even tone of voice, as if he were reading an instruction manual. I have trouble staying focused on Nabokov's narrative while listening to this audiobook. Every word that Rudnicki utters subconsciously communicates to me "here comes the boring part!"

Would you listen to Speak Memory again? Why?

Glorious memoir, gloriously read by Stefan Rudnicki, who takes great care with his Russian pronunciation (much appreciated!). I'm picking my next Nabokov on the basis of Rudnicki's reading.

It is pleasant to have Nabokov as a companion on long car journeys, but why has S. Rudnicki been made the voice of Nabokov in so many of these audio recordings? He is a lifeless, slow, plodding reader, with a rebarbative accent. COuldn't they have found someone with a bit of dramatic dash, or at least with a pleasant voice?

I was traveling to Russia and thought I'd take this along since much takes place in St. Petersburg. This is not an easy book nor everyone's cup of tea. That said, it is a stunning account by the author of his early years prior to 1940; he examines the question of "who am I?" through stories, fragments of memories and a robust portrait of his father. The writing is addictive, despite, or maybe because of the author's attitude being quite humorless, definitely arrogant and sometimes didactic. I watched a youtube video interview of Nabokov, and the real man was quite bristly and he had an odd, odd accent (despite his Cambridge education.) The narrator (Rudnicki) does a clever job of capturing the real man, without alienating us. I don't think I would have read this book on paper; listening to it was made easy by this production. The narrator handles the long, winding passages with ease. It was a delicious listen.