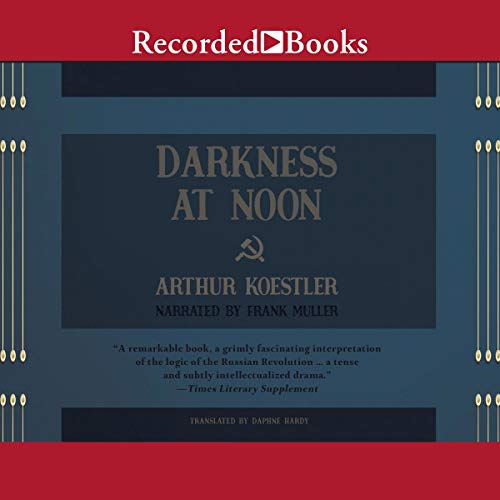 A fictional portrayal of an aging revolutionary, this novel is a powerful commentary on the nightmare politics of the troubled 20th century. Born in Hungary in 1905, a defector from the Communist Party in 1938, and then arrested in both Spain and France for his political views, Arthur Koestler writes from a wealth of personal experience.

Imprisoned by the political party to which he has dedicated his life, Nicolas Rubashov paces his prison cell, examining his life and remembering his tempestuos career. As the old intelligentsia is eradicated to make way for the new, he is psychologically tortured and forced to confess to preposterous crimes. Comparing himself to Moses, led to the Promised Land but refused entry, he sees only darkness at the end of his life, where once he saw such promise for humanity.

"A remarkable book, a grimly fascinating interpretation of the logic of the Russian Revolution...a tense and subtly intellectualized drama." ( Times Literary Supplement)

A compelling - and frightening - insight into a harsh and cruel period in History. The writing is incredible, albeit a tad hard to follow at times.
I disliked Franck Muller's reading until I was a few hours into the book, but it kind of ended up growing on me... Definitely worth reading and/or listening to.

This is the Audible edition of Arthur Koestler's 1940 novel "Darkness at Noon." It was suggested to me that I look up KIoestler on the Web and read about him for context. That took a few minutes and gave the book more gravity for me at least. Essentially, Koestler relates what it was like to live under Stalanism. If you are looking for dramatic story and high tension in the narrative, you will be disappointed. If you are open to understanding the era and circumstances almost in a philosophical sense this book is for you. Koestler was an influence on the writing of George Orwell of 1984 fame. The reading of Frank Muller is very good and appropriate to the content.

I did my thesis on soviet studies and this book encapsulates so many feelings in perfectly spoken verse, defining those feelings and giving structure to sentiments I thought were inexpressible about my hatred of totalitarianism. The authors abilities lend special credence to the perception of the condemned in a system they were once complicit in. I could not stop listening.

The guy's voice is a bit melodramatic during nonessential periods, but the writing is phenomenal.

Wasn't crazy about the narrator.

I felt the narrator over dramatized the end of each sentence the exact same way, rather annoying.

DARKNESS AT NOON is one of the great novels of the 20th century. It is a true classic. Those who believe true socialism is to be preferred over other political systems need to listen to this novel.

This story haunts me, both from the writing by Arthur Koestler and the telling by Frank Muller. It is a political and historical must-read, but with frank Muller narrating.... The best.

Literature as the ‘living memory’ of nations

DaN is not a book depicting only Stalin’s purges, as it is commonly described. It’s also about the totalitarian regimes of the 20th century. Since ‘revolution must begin with atheism’, it is no wonder that militant atheism was aimed at eradicating Christian values, the concepts of good and evil, stamping on time-honoured traditions, casting off the ‘ethical ballast’ of humanity.
In order to create a new man, free from scruples and morality, you must first destroy the foundations, free them from obligations, cut the umbilical cord and make their mind a blank sheet. Then you can fill them with the new dogmas and distorted propaganda slogans.
This is a quote from DaN. ‘When the existence of the Church is threatened, she is released from the commandments of morality. With unity as the end, the use of every means is sanctified, even cunning, treachery, violence, simony, prison, death. For all order is for the sake of the community, and the individual must be sacrificed to the common good.’ And by ‘the common good’ revolutionaries mean justifying atrocities to quench their thirst for power and establish the collective dictatorship over the independent mind. Having usurped power, the Nomenklatura can let the populace die of starvation while living off the fat of the land.
Revolutions have no moral philosophy. Revolutionaries have no scruples. Rubashov, the imprisoned protagonist of the book, had been a staunch Communist almost all his life. ‘For forty years he had lived strictly in accordance with the vows of his order, the Party. He had held to the rules of logical calculation. He had burnt the remains of the old, illogical morality from his consciousness with the acid of reason.’
Rubashov had tried to build the socialist utopia. Perhaps at first he had believed in the communist future and expressed ‘fidelity to the principles of the Communist International.’ But eventually he became corrupted by the revolution.
Rubashov was arrested and tried for crimes he had never committed. In his time, he had betrayed and framed up others. He had committed crimes far worse than those made up to incriminate him. It’s no wonder that in that dog-eat-dog reality he simply had to pay the piper.
Here are some other quotes from the book.
‘History is a priori amoral; it has no conscience.’
‘...one could treat history like one experiments in physics. The difference is that in physics one can repeat the experiment a thousand times, but in history only once.’
‘It is necessary to hammer every sentence into the masses by repetition and simplification. What is presented as right must shine like gold; what is presented as wrong must be black as pitch. For consumption by the masses, the political processes must be coloured like ginger-bread figures at a fair.’
If you read G. Orwell’s ‘1984’ (BTW it was inspired by A. Koestler’s DaN) and found it thought-provoking, you certainly should read ‘Darkness at Noon’.
I also strongly recommend reading ‘The Gulag Archipelago’ by the Russian writer and Nobel Prizer winner Alexander Solzhenitsyn.

Political ideals vs. Power and Self-preservation

An erstwhile revolutionary hero is condemned by the Party he helped to establish. Koestler's indictment of Stalin's ruthless purge decomposes the conflicts of high minded political ideals and the naked desire for power and self preservation.

Definitely captures the musings of a man condemned by a movement he supported. I enjoyed it. Good foray into morality vs. the end justifying the means.

In one sense, this is just another dystopian novel about the historical abuses of the now defunct Soviet Union, in another sense; it describes the essential folly of man through the disillusioning of a true believer. The novel presents a believable character, a fearless communist intellectual that fought passionately for the cause and rose to the elite in the party, so far as to be colleges with Stalin. We watch as the protagonist’s friends do what is expedient by betraying him as the party devolves towards totalitarianism and barbarism.

Although this is not a cheerful story I found it uplifting and strangely positive, as the protagonist cleanly faces the truth of the dark side of his friends and the communist movement. While reading Darkness at Noon I could not help but think that, although the Soviet Union is now defunct, the Soviet era totalitarians are still in control of Russia, and the lies and oppression continue. Just watch Russian News (RT) for a while and count the number of negative Putin stories (generally zero).

The narration was excellent, matching the tone and spirit of the book remarkably well.