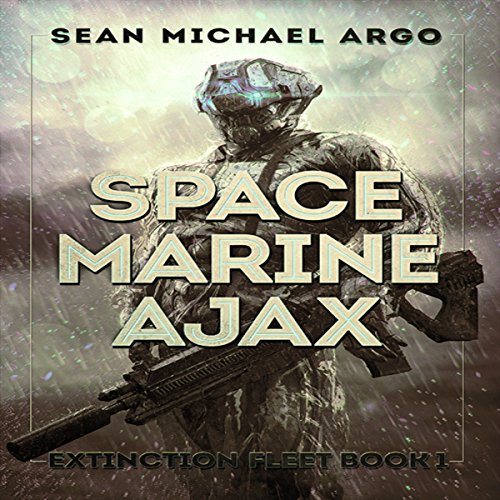 Ajax answers the call of duty and becomes an Einherjar space marine, charged with defending humanity against hideous alien monsters in furious combat across the galaxy. The Garm, as they came to be called, emerged from the deepest parts of uncharted space, devouring all that lay before them, a great swarm that scoured entire star systems of all organic life. This space-borne hive, this extinction fleet, made no attempts to communicate and offered no mercy.

Humanity has always been a deadly organism, and we would not so easily be made the prey. Unified against a common enemy, we fought back, meeting the swarm with soldiers upon every front. We were resplendent in our fury, and yet, despite the terrible slaughter we visited upon the enemy, world after world still fell beneath ravenous tooth and wicked claw. For every beast slain in the field, another was swiftly hatched to take its place and humanity was faced with a grim war of attrition. After a decade of bitter galactic conflict, it was all humanity could to do slow the advance of the swarm and with each passing year we came closer to extinction. The grinding cost of war mounted. The realization set in that without a radical shift in tactics and technology the forces of humanity would run out of soldiers before it ran out of bullets. In desperate response to the real threat of total annihilation, humanity created the Einherjar. Fearless new warriors with frightening new weapons who were sent to fight the wolves at the gate.

If Siri read to you in Casey Kasim's voice

I don't know if it was the author's writing style or the narrator's flat, nasal reading that ruined the book for me, but I just couldn't get into this book.

I did not care for the reader. I quit listening to the story about 20 minutes into it.

I did not care for the reader. I quit listening to the story about 20 minutes into it.

The story is way better than the performance. The performance is actually a detriment to the story. It sound like a robot reading it. A lot of the time emphasis is put on the wrong part of the sentence. It ends of making the cadence off.

the read was very difficult to get through. odd use of cadence made everything tough to listen to. the story was weak. starship trooper ripoff. Plus you couldn't careless about the characters.