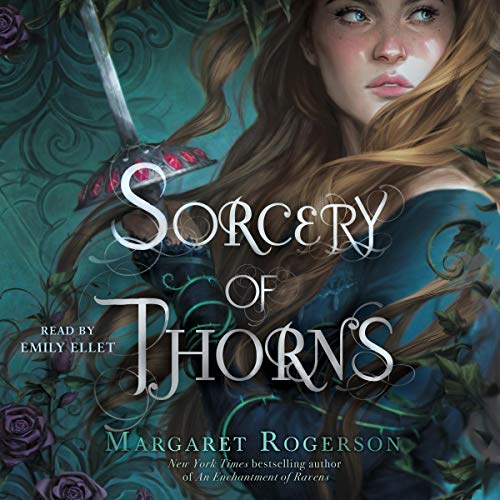 “If you are looking for magic you will find it inside this book. Sorcery of Thorns is a bewitching gem, full of slow burning romance, loyal friendships, and extraordinary world building. I absolutely loved every moment of this story.” (Stephanie Garber, number-one New York Times best-selling author of the Caraval series)

From the New York Times best-selling author of An Enchantment of Ravens comes an imaginative fantasy about an apprentice at a magical library who must battle a powerful sorcerer to save her kingdom.

All sorcerers are evil. Elisabeth has known that as long as she has known anything. Raised as a foundling in one of Austermeer’s Great Libraries, Elisabeth has grown up among the tools of sorcery - magical grimoires that whisper on shelves and rattle beneath iron chains. If provoked, they transform into grotesque monsters of ink and leather. She hopes to become a warden, charged with protecting the kingdom from their power.

Then an act of sabotage releases the library’s most dangerous grimoire. Elisabeth’s desperate intervention implicates her in the crime, and she is torn from her home to face justice in the capital. With no one to turn to but her sworn enemy, the sorcerer Nathaniel Thorn, and his mysterious demonic servant, she finds herself entangled in a centuries-old conspiracy. Not only could the Great Libraries go up in flames, but so could the world along with them.

As her alliance with Nathaniel grows stronger, Elisabeth starts to question everything she’s been taught - about sorcerers, about the libraries she loves, even about herself. For Elisabeth has a power she has never guessed and a future she could never have imagined.

A wonderful book, especially the audiobook ! Emily Ellet makes us believe we are there, in the middle of the story with all these characters. She does different voices so well I could see Elisabeth, Nathaniel or Silas (even a grimoire !) speak. I was fascinated from the beginning to the end. I can't wait to read the next book from this author.

I haven’t read An Enchantment of Ravens and I don’t usually buy new audiobooks that don’t have customer reviews, but I’m a sucker for good cover art and Charlie Bowater’s 'Elisabeth' captivated me–and I was not disappointed!

I have a love/hate relationship with fantasy tropes and Margaret Rogerson crafted the magical elements of this story with a unique touch and masterful language. I tend to judge a book by how often I find myself rolling my eyes, but there was none of that thanks to good pacing and character development. The character’s voice is relatable and shamelessly hopeful. Elisabeth Scrivener is a heroine fresh out of this modern age of fearless resistance and empathetic judgement.

I’m also a sucker for romances, and I have to say, “that scene” had me tingling all over and simultaneously awed at Rogerson’s skillful description of emotions that–when experienced–are so difficult to put into words. But she did it, and in that moment my respect for the author soared to new heights!

Very difficult to hear without earphones. This appears to be a combination of a soft voiced reader and being recorded too low. I'm going to return it and check out the book at the library. This is the only time I have ever come across this problem.

Another great story from Margaret Rogerson!

I was surprised to discover Sorcery of Thorns is a Regency, one of my favorite historical periods, but it's not constrained like a Regency. It has the social mores and customs as well as fashions of a Regency, but hares off into the supernatural, melding gorgeous locales, gothic libraries and nefarious demons into the mix. Highwaymen are aided by hell hounds, the evil doers hide amidst the Bon Ton with servants that are glamoured imps and goblins (and worse) and the sorcerer's books, the grimoires, are sentient, with distinct personalities and attitudes. And there's plenty of fantastic magic too. It's Sense and Sensibility with all kinds of good things added to make it interesting beyond the spiraling attraction of the two main characters and they're deftly drawn, strong willed and extremely likable. It's a meaty, enjoyable story you can sink your teeth into. It kept me intrigued and delighted throughout.

The audio is messed up!

I have tried everything and double checked my headphones. There is nothing wrong with my equipment but I can only hear the reading in ONE ear. This is really annoying. The starting music goes in both ears, and the test bit is in both ears as well. However if you purchase it the version you get only plays through ONE ear. I feel so upset by this. I gave good money for this!
I downloaded this onto my phone and it plays in both ears but she is so quiet in this version. I have it turned all the way up and I can hardly hear it.

I really wanted to like this book, but the story was so surface level. I found myself distracted and not invested in the characters at all. It did nothing for me. I truly didn't care about any of them. They had no development or depth. I only finished it out of spite and yet I'm still annoyed I dedicated 14.5 hrs to it.

I almost put the story down in the beginning. I took a break from it and read “One Hundred Years of Solitude” instead. However, I have pledged to complete every story I purchase on audible and returned to honor my pledge.

I am glad I did, though the convenient twists and turns of the plot left me rolling my eyes at times. Solutions came too easily —or were too dramatic.

Yet, when moments of brilliance came, their imaginative and unique qualities transported me. Books containing souls? I hadn’t thought of this and yet, I was smitten. Paragraphs appeared so deep and quotable, I returned to take them down word for word.

Stories like this one give me hope as a writer. If Roberson can be published, my similar uneven novel has a chance.

Left Wanting So Much More ...

There were a lot of great things about this book. The magic and world building were nice. The characters lovable and developed. But like all things in this book, all those feats were just shy of satisfying. Character development was so close to well done that it hurt all the more that facets of their stories and inner working were left so bereft. Same goes for the development of the romance and ultimately the plot. Even so, the epilogue leaves more questions than answers and While it was a nice book, it fell short of being a great book.

The story was fascinating and compelling from the start. I had no idea what a book around living grimoires would be like but I wasn't disappointed. It was a magical listen I could barely take breaks from

As for the whisper complaints, yes, the narrator is soft spoken. But it also fits the feel and tone of the story(much of it is spent in and out of libraries after all, shouting would be strange). Simply listen to the book with headphones and you shouldn't have any issues hearing everything. If, however, you are hearing impaired, it's possible you might struggle to hear the few times a grimoire whispers to the main character

I really wanted to like this story, but between the narrator and the predictable story line, I just couldn't get past the mid point. Very frustrating, as I think there were some interesting story points there.

Didn’t Di It For Me.

I really wanted to like this book and tried it to the end, but the writing is very juvenile and it takes a bit more imagination than I guess I have to actually appreciate the storyline. It’s not completely awful, but it definitely didn’t make me want to go to book 2.

I didn't expect much when I purchased this book; in fact I did it on a whim, because I was bored.
But then I started to read it and if it were one of the magical grimoires in one of the great libraries it took hold of me and pulled me in.
I won't say much to the story of the book, you should hear that for yourselves, only that much: I loved the characters and their interactions! I can't tell how many times I ended up laughing at one of the exchanges between Elisabeth and Nathaniel or at a dry comment Silas made.
The ending left me with a wide smile and the only regret that it was over already.
The narrator did a very good job, however, and this is just a matter of personal taste, I would have very much preferred a narrator with a British accent; The setting of the book somehow reminded me of Victorian England and the American Accent just did not fit into that setting. However, she still did a wonderful job.

This book truly was an unexpected journey in many ways. I didn't only portrait the growing of a young women who, for the first time, experienced the life outside of her once small world. But also shows us the importance if love, companionship and friendship and that these thing aren't bond to races or social standards. There also isn't a true description for good and evil as every individual should be judged by their actions and not by the elements I mentioned above.
To sum this up in one sentence: "This Book is beautiful."

Subtle and bold, with amazing twists and a bright new perspective on all kinds of polarities we call good or evil. Narrated by a wonderful talent, a voice which pulls you right into the rich depths of this magical tale. Do listen!

I have both books from the author and I like them a lot. They are amazing for children as well as adults. Imaginative and magical.

It's the female protagonist novel I wish I would have had ten years ago as a teen. Elizabeth is a character I learned to love from the start, as all the other characters in this book. This book has a beating heart of feelings and I will listen to it again most definitely!

I loved finishing this book. the world building is really nice and I loved the characters and the story was good. all three!
I especially liked that the romance woven into the plot and did not feel like the author checking trope boxes.

For everyone looking for an enchanting story this is a perfect one! I loved the characters instantly, the invented world draws you in deeper with every chapter and the speaker does an amazing job too bringing it all to life. I couldn’t stop listening while the whole story enfolded vividly in my mind!

Very fairy tale inspired. :) Although young adult, the story is outside the box for your typical young adult narrative. I really enjoyed the read!