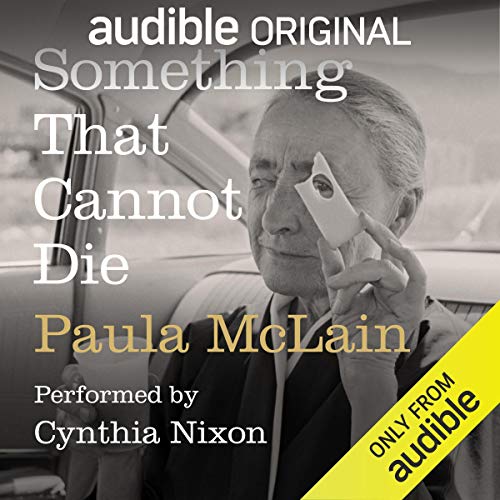 Something That Cannot Die

A powerful and revealing story about Georgia O’Keeffe, torn between the city that made her and the desert that promises to set her free, written by Paula McLain, the New York Times best-selling author of The Paris Wife and the forthcoming When the Stars Go Dark, and performed by Emmy Award-winning actress Cynthia Nixon.

It’s 1929 in New York City. In an apartment high above Lexington Avenue, the painter Georgia O’Keeffe feels stuck. At 42, she should be at the apex of her powers as an artist, and yet something is missing. Her husband - the gallerist Alfred Stieglitz, who helped build her reputation in the art world - has grown needy and insecure, not to mention unfaithful. More than this, her work has lost its fire, and she knows it. The calla lilies and poppies for which she is revered now seem careful, predictable. Feeling desperate and conflicted, Georgia flees to New Mexico in search of something that will ignite her once again. There, she meets an adventurous young woman whose energy and optimism take hold of Georgia and show her a glimpse of what another kind of life - one of her own making - might look like.

Set against the transcendent desert landscapes of New Mexico, and brought to life by a beloved voice and contemporary master of historical fiction, Something That Cannot Die is an intimate portrait of a great artist and the adventures - both physical and spiritual - that moved and changed her.

i felt my life in this story

I love this short story because I am in a place where I am looking for a place and time I missed by starting adulthood as a child. From that time on I pleased everyone but me. Now 68 and alone I still feel like that sixteen year old mother with all my hopes still ahead of me. Saying when I get my child in school I will go back to school also.. Instead I had another child. but not giving up I kept going back to school until I got a degree. So I think I see myself in the lady.

This transported me to New Mexico and Ghost Ranch

I’m a big Georgia O’Keeffe fan, and have traveled to and stayed at Ghost Ranch, near her home there, and to see her Abiquiu home a number of times. I’ve read about her life and seen major exhibitions of her work.
I loved this story! I felt like I was right there with her, seeing the beauty of New Mexico and witnessing her growing independence.
Terrific story that left me wanting 25 more chapters!

I wish this was a full length novel!

Excellent! Engrossing! The story ended and I wanted to keep hearing Georgia's thoughts and feelings.
She was a woman ahead of her time and lived life on her own terms.

The telling of this story about Georgia O'Keefe made me feel like I was sitting in the room, or outside the tent with Georgia O'Keefe. So richly told, each chapter lets one experience in the hearing, what Ii think many wildly creative women have felt. A need for freedom to create, but conflicted in their relationships. Hearing of the life of such a remarkable woman (who I have read about many times before) , her acceptance of those who dared to be different when so much was behind closed doors, just simply made me feel good. Enjoy!

Such a pleasant listen!

This was so enjoyable to listen to and I was sorry when it ended.
it made me wonder why I don't spend more time alone in peaceful nature.
Life is so busy now and this just calmed me down.
Wonderful narration!

Another book/story of pretend dialogue from the past - the protagonists (the good guys/gals) are really woke- everyone around them, especially men are blockheaded oppressors (the bad guys/gals) - this is so tedious, Audible. Utter, predictable bore. A disservice to Georgia.

Such a delightful story, i found it beautiful and romantic, captivating and extremely relatable. something I want to send to all of my 40-something lady friends to remind them how much life there is out there to be lived on their own terms.

Spent time in Abiquiu and at the Ranch. McLain perfectly captures it and the Voice of Georgia O’Keefe! 4 Stars!

This book was amazing! Whether or not you love Georgia Okeeffe, this is a wonderful short book. Several times this book had me in happy tears after the beautiful explanation of the beautiful New Mexico scenery. I have lived in New Mexico and miss it very much, this book capturing the joy and beauty and magic that is New Mexico that Georgia Okeeffe was able to find. This book is definitely recommend it and can be listened to in under a couple hours.

This was not what I expected. Instead of a documentary, it’s a monologue about finding artistic freedom. Great title for artists and creators to enjoy. I found it overly long and somewhat dull. The artist finds a place in New Mexico that inspires her artwork.