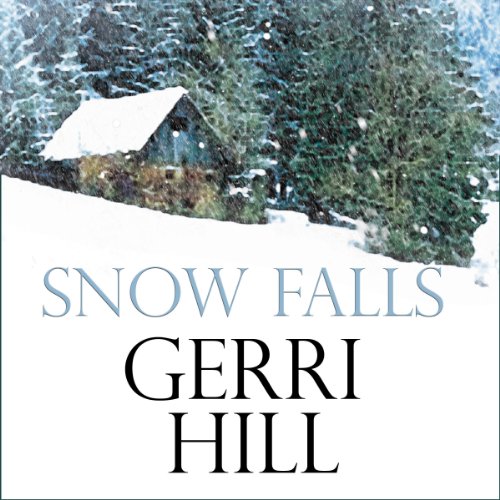 Jennifer Kincaid, on her way to a writer's workshop in the Colorado mountain town of Lake City, gets lost and is stranded by an avalanche.

Catherine Ryan-Barrett, running from the fame and fortune of her family name, wants nothing more to spend the winter alone and sequestered in her high mountain cabin. She is not prepared for a party crasher.

After spending two months together, they form an unlikely friendship that deepens even further. But after the spring thaw, Jen leaves and returns to her life in Santa Fe and to the man who wants to marry her. All she knows of the woman who rescued her is her name... Ryan.

The plot was OK. The characters were shallow. The narrator was horrible. The sex scene combined with the narrator's very antiquated voice, made me cringe.

I wanted to like this book because Gerri Hill has graced the world with a lot of lesbian themed novels, but this one is not her best work.

I stopped several times and wondered if this book had been read by Abby Craden would it have been less corny and more sexy. The world may never know.....

Narration is terrible,, but the story is wonderful!

The story is wonderful, it's well written, interesting, and the characters are very complex. The narration on the other hand is awful.

I’m a fan of Gerri Hill, so I say this with all sincerity, I’m sorry but this book sucked. The story was shallow, the characters lacked depth and were not likable. The main characters had no chemistry. Put all that together with a horrible narrator and you get a dud of a book. I really tried hard to find something good about the story or the characters but I just couldn’t. I do not recommend this book at all.

What made the experience of listening to Snow Falls the most enjoyable?

As a gay woman, I enjoyed this romance book as it was a lesbian love story. I enjoyed how the characters developed and grew as individuals and together. I wish the author didn't spend so much time on developing Jen and Ryan's 'friendship' and, instead, spent more time on developing their romantic connection and what happened afterwards. I think it was too easy of a 'fix' in the end - and though I did enjoy the ending - it just felt a bit too rushed for me. If there was a sequel or trilogy of these two and how their love manages in 'reality' that would have been nice.

But, overall, I was pleased to see a well-written lesbian love story on audible that was not all about sex, however, when these two 'did' fall in love and decide to be with each other, I wish it had been less about their sexual intimacy and more emphasis placed on the other layers of intimacy they shared. I still have no idea if they have anything (other then sex) in common.

A bit more depth and you would have had me crying with the ending. Also Jen's character never grew on me. She was a 'one note' character. Ryan, at least, became three-dimensional, eventually.

What was one of the most memorable moments of Snow Falls?

When Ryan showed up at Jen's house unexpectedly and then left her after sex. It was a good bit. I liked how it showed depth in Ryan's character. It made her seem three-dimensional.

Would you listen to another book narrated by Sara Hawthorne?

No. Hated her lack of skill in reading a book. She has no talent in voice 'acting.' All the characters sounded the same. She made Jen sound like she was stupid and 'slow.' Won't listen to her again, no matter what book she reads. Boring voice.

If you could rename Snow Falls, what would you call it?

I would have called it something that showed it was a love story. Some suggestion are:

I will read this author again with a different narrator. I hope she has written some more lesbian fiction.

I really loves this story. it had a great flow to it. very engaging and realistic in a lot of areas.
I did feel it could of been longer and some areas really didn't need to be there . However this is a must read for anyone who loves romance.
update... I can't get enough, this is such a romantic book I have read it over and over.. the ending.. I have so had that feeling, and there is nothing like it.

In the genre of most literary love stories two people who don't like each other much are forced into more togetherness than either of them would prefer. As they experience enforced contact with each other attraction begins to grow, affection follows and before you know it they are in love; and in bed. This of course occurs just as the time they have together comes to an end. Both women then fret over problems that exist almost fully in their own minds, so they're kept apart even as the love in their hearts continues growing.
Despite the utter predictability of the plot this really is a marvelous love story. Part of it is due to the high mountain setting and Ryan's small simple cabin. Part of it is the tension the women feel as they begin to develop feelings they have only one outlet for and a reluctance to go there. In the one chapter where Ryan is with her family of origin; the interactions are both sad and funny. The only real down point in this really good story is one ridiculous idea in Ryan's mind that she repeats to herself like a mantra. Listen and enjoy.

It's a "I remember when" feel good favourite !!

Would you consider the audio edition of Snow Falls to be better than the print version?

Great audio version ... Will read it more often this way too.

The friends... The best ones in life do do stuff like that for you !!

Which character – as performed by Sara Hawthorne – was your favorite?

Can't decide as Sara was able to express each character with personality really well.

It made me reminisce to earlier loves and the emotions of discovery.

It's only the first time I've read this book... and I'm looking forward to reading it a few more times too !
Congrats Gerri Hill well done and thanks :-)

Perfect book unlike all others on Audible.

Would you consider the audio edition of Snow Falls to be better than the print version?

I read this long before it came out on this website and I loved it in print, but enjoyed it so much more as an audio book.

What other book might you compare Snow Falls to and why?

THis book isn't really comparable to other books unless you know other Gerri Hill books. I love all her books and hope they show up on this site.

I think the scene when she is found on the side of the road and has to rescued is the best. The main character stays outside of society for a reason and this woman messes up all her plans.

Who was the most memorable character of Snow Falls and why?

The main character is perfect.

I would like to see more books along this kind of storyline.

loved it, would love to be in the cabin like that. get away from the world

I'm glad i finally got to this book. It's was cool that Reese and Morgan are in this book, No Strings is one of my favorite books.

Gerri Hill never disappoints with her romances. This book tells the slow burning romance between Ryan and Jennifer. It takes for Jennifer to be trapped in the mountains with a recluse to get a grip on her real feelings. For Ryan the sometimes clumsy and chatty Jennifer shows her that there is more to life than running from her feelings.
I like Gerri Hill’s romances and I enjoyed this book and the narration very much!