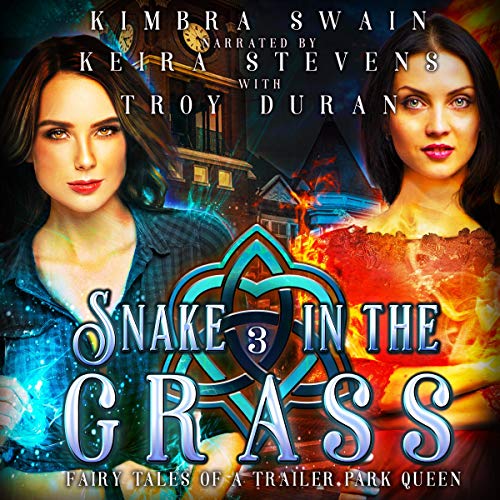 Snake in the Grass

Snake in the Grass

Shady Grove is having a fairy council election! Grace’s throne isn’t on the ballot until she walks into town.

Grace Ann Bryant, queen of the Exiles, lives in Shady Grove, Alabama, a small one-horse town where the population is mostly fairies. Since taking over the title as their queen, Grace has found the job to be an overwhelming task. So, the citizens decide to hold a council election to support the fairy population and the natural trouble that arises. However, when a legitimate challenger slithers into town, the throne is suddenly up for grabs.

Amidst fending off the challenge, a Kitsune rolls into town looking for a mate, and she has her sights set on Grace’s fiancé Dylan. Grace has to fight for her throne, her fiancé, and her life, as her challenger pushes the limits.

If you think human elections can be wild, just wait until you see how manipulative and vindictive fairies can be! When it’s all said and done, Grace discovers the true snake in the grass, but at what cost? The true power she faces is beyond anything she could have ever imagined.

Snake in the Grass is the third book in the Fairy Tales of a Trailer Park series by Kimbra Swain.

Q: Why did you write the Fairy Tales of a Trailer Park Queen Series?

A: I was born and raised in Alabama, and I loved the urban fantasy genre. I wanted to mix those two things, but remain true to the Southern traditions and values that I was raised on: family, community, and determination. The Trailer Park Series is my ode to the South.

Q: What is the most important part of the Fairy Tales of a Trailer Park Queen to you?

A: Every single character in the series is real to me. The development of each one is so important for me going through the series. Some of them, including Grace, start off with many flaws. I should say, especially Grace.

Q: How much of Grace is patterned after yourself?

A: Oh, gosh! Grace and I are a lot alike. Sassy and smart. However, Grace is very compassionate and trusting. She's also got a mouth on her. She says things that aren't PC, but as her character develops over the series, she sees that there were things she was very wrong about. Grace's story is about becoming who she was meant to be, and fate doesn't define that purpose. She does.

Q: What are your future plans for the Trailerverse?

A: The main series will have 15 books with a short story anthology focusing on the minor characters. It is also going through an exciting new re-brand. I will be launching Wynonna's story this fall in Stories of Frost and Fire. The werewolf Dominick Meyer will also get his own series called Dog River Wolfpack. It will launch this fall, too.