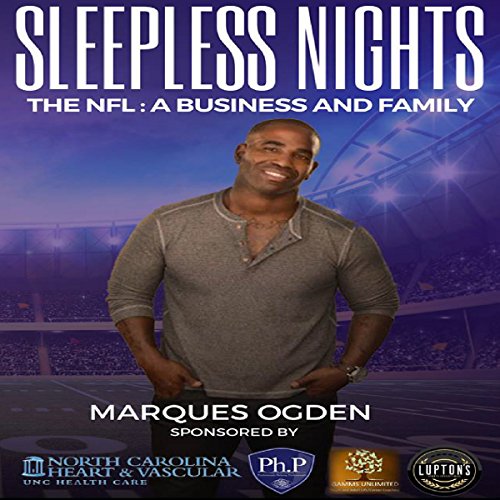 Growing up in a single parent home with a father that inspired perseverance and fairness, Marques Ogden learned how to define his values and set goals. Ogden attended Howard University from 1998-2002, where he played Division I football. He followed his dream and his brother Jonathan's footsteps, eventually getting drafted into the NFL in 2003. Overall, he played for five years as an offensive lineman with the Titans, Bills, Ravens and Jaguars. Even during the off season, Ogden helped train football players in Europe, both physically and mentally. At the age of 27, he founded a construction company called Kayden Premier Enterprises, a business that grew rapidly in its first few years, but Ogden and the business eventually went bankrupt, after Ogden loss almost two million dollars on one project in a time period just under 90 days. At his darkest point, the NFL came in and helped Ogden restructure his life. With hard work and determination, he became a motivational speaker and marketing leader, helping to build others up to succeed. Through it all, Ogden dealt with his own personal demons of drinking and gambling to make it regardless of obstacles that were in his path!

Great book, this story is honest in the telling

I've been lucky enough to get to see Marques Ogden teach in a seminar. I bought this book immediately after finding out that he'd written it, and that it was on Audible. I finished it that same day. There is so much to take away from his story. I admire that he was able to be open and honest about his life. I also am appalled at those who tried (successfully or not) to take advantage of him due to his NFL status. As a fellow entrepreneur, I have learned a lot from both this book, and hearing him tell his stories in person. I recommend this book 100% to anyone who is curious about what it feels like to transition from professional sports, to regular life.

Marques Ogden's experiences are a testimony to his character and strength. His openness about his interesting life, personal loss and professional challenges was refreshingly thought:provoking. A great read with golden nuggets of wisdom hidden within.

Would you listen to Sleepless Nights again? Why?

Absolutely! There are so many life lessons in there, I would recommend young people, especially to learn from other's experiences, instead of the hard way, by reading and sharing this book.

What was one of the most memorable moments of Sleepless Nights?

I was so moved by the love and respect he had for his father, I cried during the part where he passed away.

Which character – as performed by Don Hoeksema – was your favorite?

I loved the way he portrayed his Father, right on!

Life is a fast highway, pull over and think, before you decide which road to take.

I was very moved by how Marques never let anything bad completely take over, and how he relied on his family and friends and faith to turn his life around.