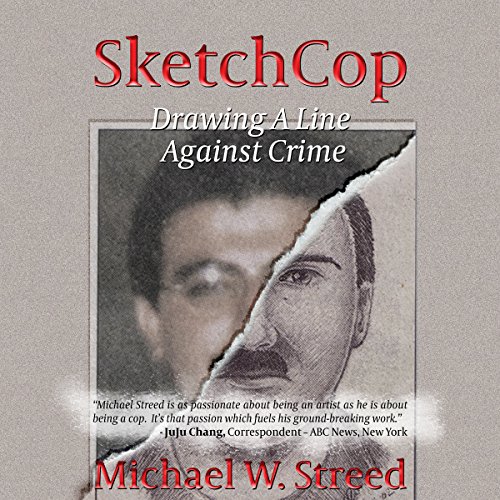 For over three decades, Michael has provided signature images for the country's most notorious murders, rapes, and kidnappings, including the kidnapping and murder of five-year-old Samantha Runnion as well as the Baton Rouge Serial Killer.

The SketchCop has fought crime coast to coast, from Los Angeles to Baltimore, Salt Lake City to Baton Rouge. Along the way he has papered the walls of police squad rooms with sketches of their cities' most dangerous criminals.

In this collection of true crime stories, Michael shares cases from his own portfolio. He describes how he connects with and empowers courageous victims and eyewitnesses from all walks of life. Using their descriptions, the author creates lifelike sketches of the assailants with an accuracy that has led to quick identifications and captures.

SketchCop - Drawing a Line Against Crime provides listeners a glimpse at some of Michael W. Streed's career cases and the significant role he plays in the criminal justice system.

An Education In True Crime

I'm a true crime junkie and am always interested in learning something new about the process by which a criminal is caught. This was a fascinating, in-depth look at the evolution of forensic art and a pioneer in the field's personal experiences as both a cop and sketch artist. Covering many different types of cases, this book had both great story telling and also a big heart. Streed is a talented writer and was clearly a great police officer. Gauffi gives a very solid performance as narrator; I would recommend this book to any fans of true crime.

Interesting read about how it is done and changed

This is a compelling group of stories of how one cop doing his job hunting down criminals one sketch at a time. He gives such compassion not only to his drawings but to the victims treating each one as if they were the first. Giving them what the need to feel comfortable to give him the story as he draws what they see in their mind. At times not everyone is truthful as you will read it is part of his job to find every little detail even those that are not telling the truth so they can find the right person who did the crime. No one is prefect as you will see inside these pages from the victim to the cops who put the bad guys away. We all make mistakes it is really painful when at times you make a big one and put the wrong one behind bars. Having a drawing help put the write one away along with today’s DNA which they did not have years ago.

Mr. Gauffi did a wonderful job of narration it was read in one voice which would have been the voice of the author. That is expect since there really isn’t any characters this is a story of facts of things that have happen and how sketch helps solve the crime. There are no background noises or any signs where the narrator took a break with the volume going from low to high which is a sure sign a break was taken. He gives very clear narration with a smooth voice that keeps you awake and interested in what you are learning. He lays the facts out giving compassion to the victims and all they had to go through. I look forward to listening to more from this narrator.

The author gives you a base that starts with him as a young boy wanting to be a cop just like his dad. He goes through his years with a switch to his job and his desire to draw combining it together. He goes through the start of pencil drawing taking you through to computer drawing and how that changed over the years. His input to the changes helping others make those changes in their department to how it effect the court room and having to prove what he does works. He writes about very interesting stories that has happen with him or others as well as the part he or other cops play in finding the guilty. As you well know not all criminals go to jail, not all are found, the innocent sometimes have to pay for a crime they didn’t commit. Thankfully with DNA this does not happen as much as it use to. The human mind is a mystery as you will see clearly through the eyes of the author. We see things different, being scared makes us see things different. I found this to be a very interesting listen with wonderful facts. We see the pictures but I doubt many everything about the person behind those drawings . Anyone who enjoys true crime and all that goes with it will enjoy this audio.

If you could sum up SketchCop in three words, what would they be?

Have you listened to any of Stuart Gauffi’s other performances before? How does this one compare?

It was a good performance. I was kept interested till the end of the story.

Fascinating look at an underrated position

We see these sketches all of our lives. Rarely if ever do we think about the process or the people behind the sketches. This is an entertaining and interesting look at a police sketch artist and what and how he does it. I gave a 4 on story because the last chapter is rather flat. I would have preferred more information about the author or other sketch artists. I was voluntarily provided this free review copy audiobook by the author, narrator, or publisher.

The sketch artist is key to creating the image of a criminal through the words of witnesses. Someone we often never think about when a crime is solved, but is extremely important to helping identify perpetrators of heinous crimes

Michael Streed, of course. His stories are captivating. Since I grew up in the O.C. and remained for 30+ years I am familiar with the places he refers to, which made especially interesting. I would LOVE to see this made into a T.V. crime series (Investigation Discovery?).

He has a voice that lent itself to the gravity of the stories. I felt like I was listening to the author tell the stories.

Stuart's advice at the end of the book would be particularly helpful.

The ability, education and commitment of the author and his profession. He made much more of an impact in being a 'sketch cop' than a Disney artist.

I was given this audible book at no charge for my unbiased review.

Not an Interesting Read

Yes, too much of the writer's own thoughts and feelings

Make it not be so monotonous

What aspect of Stuart Gauffi’s performance would you have changed?

I received this book free in exchange for an honest review.

A interesting and descriptive view of a notorious seriel killer..~ another book I just couldn't put down till my eyes blurred and the clock was saying 3am time to sleep ~ kept me right on the edge till the last page ~ great job and love the storyline ~ will I tell much about the book absolutely not and ruin it for you just know you must get this one ..

“I was voluntarily provided this free review copy audiobook by the author, narrator, or publisher.”

This book it’s a new perspective through the eyes of cop… I enjoyed the book and found the cases and examples interesting.
"This audiobook was provided by the author, narrator, or publisher at no cost in exchange for an unbiased review courtesy of Audiobookboom”

“This audiobook was given by the author, narrator, or publisher at no cost in exchange for an unbiased review via Audiobook Boom.”

This memoir of a police sketch artist gives the listeners an inside look at some of the intriguing cases during his career. I really enjoyed this book.

The narration was well done.The characters were well portrayed.

Interesting topic written by someone dedicated

If you could sum up SketchCop in three words, what would they be?

Michael Steed and his dedication to what he does is impressive.

What does Stuart Gauffi bring to the story that you wouldn’t experience if you just read the book?

Stuart has a super voice for a cop book. He did a fine job narrating this book.

The child murders were very sad.

I was provided this audiobook at no charge in exchange for an unbiased review via Audiobook Boom.