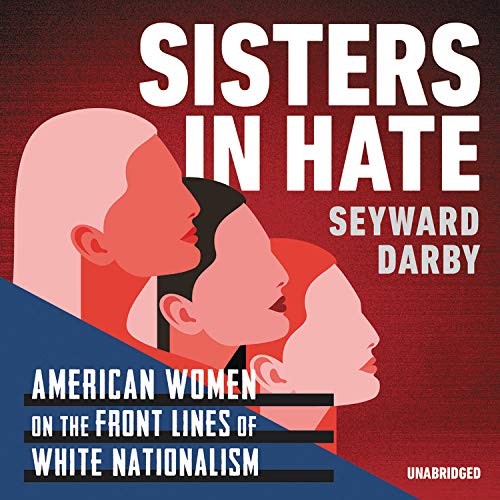 After the election of Donald J. Trump, journalist Seyward Darby went looking for the women of the so-called "alt-right" - really just White nationalism with a new label. The mainstream media depicted the alt-right as a bastion of angry white men, but was it? As women headlined resistance to the Trump administration's bigotry and sexism, most notably at the Women's Marches, Darby wanted to know why others were joining a movement espousing racism and anti-feminism. Who were these women, and what did their activism reveal about America's past, present, and future?

Darby researched dozens of women across the country before settling on three - Corinna Olsen, Ayla Stewart, and Lana Lokteff. Each was born in 1979 and became a White nationalist in the post-9/11 era. Their respective stories of radicalization upend much of what we assume about women, politics, and political extremism.

Corinna, a professional embalmer who was once a body builder, found community in White nationalism before it was the alt-right, while she was grieving the death of her brother and the end of her marriage. For Corinna, hate was more than just personal animus - it could also bring people together. Eventually, she decided to leave the movement and served as an informant for the FBI.

Lana, who runs a right-wing media company with her husband, enjoys greater fame and notoriety than many of her sisters in hate. Her work disseminating and monetizing far-right dogma is a testament to the power of disinformation.

With acute psychological insight and eye-opening reporting, Darby steps inside the contemporary hate movement and draws connections to precursors like the Ku Klux Klan. Far more than mere helpmeets, women like Corinna, Ayla, and Lana have been sustaining features of White nationalism. Sisters in Hate shows how the work women do to normalize and propagate racist extremism has consequences well beyond the hate movement.

"A brave, detailed and insightful portrait of three women who came to advocate the alt-Right's bigotry, but a portrait that is not simplistic. Especially valuable is its examination of the women's complex and contradictory ideas about gender and the appropriate place for women." (Linda Gordon, author of The Second Coming of the KKK)

"Seyward Darby's Sisters In Hate is a masterfully reported and incisive look at the virulence of American extremism, as seen through the eyes of three white women who trafficked in monstrous prejudice. Now, more than ever, it's important to comprehend, and not look away, from the unspeakable damage caused by the far-right, and Darby's book helps us understand the critical role women play in spreading such dangerous ideas." (Sarah Weinman, author of The Real Lolita)

"There is no more urgent story than the resurgence of violent white supremacist groups in America. Sisters in Hate delivers an invaluable examination of the ideologies at this movement's core by tracing the stories of three women who found themselves seduced by lies of hatred. Darby provides the most in-depth reporting I've ever encountered on the role of women in this emboldened movement, while unflinchingly dissecting the misogyny implanted at its ideological core. Those who've spent recent years wondering "how" will find the unsettling answers within this book's pages." (Wesley Lowery, author of They Can't Kill Us All)

Listen to this book! (But maybe alone?)

I can’t recommend this book enough. As a southern woman who used to work with the Libertarian party I recognized both myself and others in this exploration of the slippery slope toward the alt-right. My only caution is to listen to it with headphones on. While I wholeheartedly support putting the terrible rhetoric of white supremacy on full display, there are plenty of slurs vocalized in this audiobook that you might not want your kids, boss, or others to hear coming from your speakers out of context.

This book gives us such needed insight. It is impossible to understand white nationalists from the outside. Darby reveals so much of what’s going on in their lives & the kind of lostness that leads them there. It shows just how close some people already are from drifting across that line, & how sometimes they don’t even realize it’s happening. It also shines a light on us & what needs to change in order to fight racism on a bigger scale. People really do need to belong, be loved & be needed. Many thanks to the very brave author.

Seyward Darby walks into and reveals dark corners of American life and holds them up to the light in this chilling account of the hate movement. Through personal stories and well-researched historical accounts, she shows a side of the hate movement that many may ignore, but need to see. A solid audio performance compliments the gripping prose.

Fascinating and terrifying at once

It was particularly interesting to hear the type of terminology used by the alt right. Their recruiting strategies and propoganda machine. I can see how some find fake legitimacy under the guise of preserving their culture... A red light should light up when it's coupled with xenophobia and blatant racism.

This is a must-read in the Trump white nationalist era. Extremely thought-provoking, thoughtful, and well-researched.

I read to find out more from a liberal perspective

I would honestly like to see a book on hate not on the color seemingly responsible for the hate to speak of from a liberal stand point. Hate breeds hate. I am white and have experienced racism towards me because I was simply white. I have raised 5 children all of which are not racist because we taught them to judge others based on merit not various features. I hope most everyone else is doing the same. That is the only real fix. If someone does something to you you don't like don't do it to other.....

This is an Insightful and factual book on white supremacy in the United States. Darby doesn't disappoint.