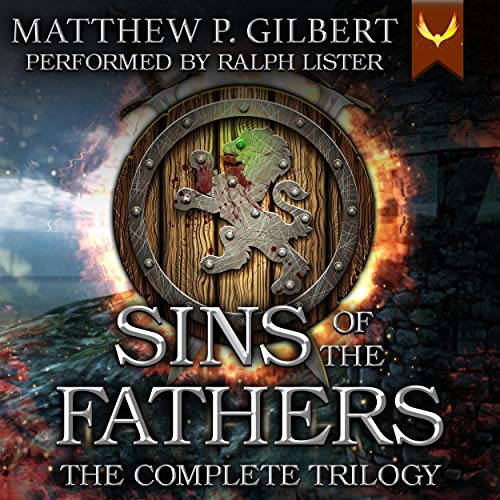 Sins of the Fathers: The Complete Trilogy

To stop the end of the world, they must defy a god.

Long ago, powerful sorcerers stole the power of a god. Only the courage and sacrifice of great heroes stopped them from conquering the known world.

They thought it was over. But the god who was robbed so long ago remained. He swore that long after the heroes were dead, when his power returned, he would have his vengeance on all of humanity.

Now, the time of his prophecy is at hand. A band of elite desert warriors crosses the sea, hoping faith and courage will be enough to turn aside the coming apocalypse. Their leader, Prelate Yazid Valerian, seeks the mythical city of sorcerers.

There, he believes, he will find allies and answers. But the city has been hidden for centuries for a reason. And he never expects that he and his men may spark the very doom they seek to prevent....

Included in the Sins of the Father Trilogy:

I’ve read (and absolutely loved) all three of these books. The narration is so perfect for the mood and feel, no one could have cast it better. Now, with all three in one credit download, I’m not sure there could be a better time to snag it. If you’re on the fence, you kind of can’t go wrong.

The feel of this book is grim dark but in such a unique way. Masterfully written and “real” feeling. I have an eye open for anything new from the author and I’ve already picked up some of Lister’s back catalog he’s that good.

Here we have a grand tale with a wide scope that encompasses strange new cultures, lots of history, and a deep mythology that leaves the truth largely open to interpretation.

As always, Ralph Lister gives a phenomenal audio performance. His robust voice is perfect for this type of fantasy, in much the same vein as Roy Dotrice and Michael Kramer. His one failing, which he shares with Roy Dotrice's later work, is that he lacks the range to produce voices that sound young. Pretty much everyone in the book sounds middle-aged or older. Elsewise, however, his voices are nigh on perfect. His vocal inflections are fantastic, and his tempo shift throughout, while being on the subtle side, almost perfectly convey the tension of any given scene.

Now, as is my wont, I will largely forego any discussion of the plot. There are other reviews that give summaries of the plot.

Throughout the trilogy, the writing is fantastic. The prose flows beautifully, is error-free, and gives just the right amount of focus of the details.

Although it takes quite a bit of time to get there (mid second book), the trilogy takes a deep dive into the major characters and their personalities.

While there are many that I don't actually like as people, nearly all of them grow to the depth of real people and I can't help caring about them. A few that I really didn't like earlier in the trilogy grew on me and by the end I just couldn't help rooting for them.

Throughout the trilogy though, I do have a few issues.

The main one being completely a matter of taste. After so many fantasy epics that focus so strongly on the royal politics of various realms, I find myself utterly burned out on the trope. Between the Meites, the noble houses, the subplots involving the founders, and to an extent even the plots involving the Xanthians, I would say that something near 80% of the novel's conflict revolves around the politics of the nobility/royalty. And while if it's done in a new and unique way (such as in Phil Tucker's Chronicles of the Black Gate) it can hold my interest, here I really struggled to pay attention and get through it.

I just couldn't look past the modernisms. Not only am I not generally fond of advanced sciences (such as anatomy; medical science, including hypodermics, anesthetics, advanced surgery, etc; chemistry; etc.) in fantasy stories, particularly when they exist in a society deemed "primitive" or "barbaric," but for me the larger issue is the modern turns of phrase present in this book. Every time I hear one it throws me right out of the story. And yes, most modern curse words fall into the same general category for me. I just can't force myself to believe that a medieval society would use those words in the same way we do. Especially when I'm hearing a term like "bullsh*t," which appears to have been coined in the early 20th century, but certainly, based on etymology, could not have been in use before the 17th century.

Lastly, the magic system.
Not to put too fine a point in it, there doesn't seem to be one. Our rather, it's left very squishy and undefined. It seems to be able to do anything the author needs it to with no real structure or rules.

And more importantly, there doesn't seem to be any cost to the magic aside from perhaps a bit of exhaustion.

I was also really hoping for some insight into what the meites actually are and how someone becomes one, but that is never addressed.

Now, all that being said, throughout this trilogy we've got a fascinating arc, both in plot and in the various characters. There's a lot of awesome development all throughout the various plot lines.

And finally, the ending.
In each book individually, the endings comes together extraordinarily well. But dramatically more so the final conclusion at the very end.

At one point, I was left feeling "that's it" but then the real climax began and I have to admit that it was suitably epic, exciting, and emotional.

In short, it ticked all the right boxes.

I'm left feeling sad over some of the losses, but in the end I'm very satisfied with this ending and I find myself really hoping there is a followup series in the works!

I'm 6 hours into Book 1 of this series (which is the halfway point of Book 1) and even now, I have no idea who the main characters are suppose to be. Maybe the author wanted to do something like Game of Thrones which featured a collection of characters with no main character but unlike George R.R. Martin, who organized his chapters into neat and tidy viewpoint character arc, Matthew Gilbert's chapters are long and the story focus shifts several times between different characters within the same chapter. This constant shifting of focus made it hard for me to try to understand a character's motivation. And if I don't understand his motivation, then I'm not attached to his fate.

So far, the story itself isn't compelling enough for me to continue listening. The most exciting bit happen in the 1 hour prologue. Since then, it's been 5 hours of listening to a bunch of characters I don't care about doing things that moved the story forward inch by slowly inch. The author did a good job with setting up the back stories but c'mon, let's get on with it already!

Luckily. Ralph Lister did a good job with the narration. Which was probably why I kept listening for as long as I did. He has a nice deep voice and it was really easy to understand him as the narrator. However, it was really hard to differentiate which character was speaking because he used the same voice (and the same laugh!) for most of them. With the author tendency to constantly shift focus, it made the story that much harder to follow.

Maybe it's not fair for me to write a review when I haven't even finish Book 1 but there were just too many flaws for me to continue. I gave it a fair shot and if a story still can't hook me by the 6th hour, I have no interest in continuing on with the book.

It was a long trilogy. The last book made it worth listening to as most of the pieces fell into place.

I couldn't even get past the first 3 hours before turning it off. Garbage dialogue and characters that were stereotypical, flat and uninteresting.

The story line and background was confusing. And was left with huge holes. The characters with “honor” were ok defending horrible people. Their “duty” was to accept all the debauchery in immoral aptitude’s of the leaders. The moral compasses of characters were always changing. The only reason I continued to listen was hope it would get better and to refuse to accept I wasted money on it.

Great story. It did take me a while to get into it. I even had to restart it, once I did, I was hooked and drawn into the story

The story is incoherent. Who can know why anyone does anything to anybody. The absence of an editor is exhausting. There are good moments - but they get lost in the shattered glass of the failed picture window.

no character worth rooting for

there is not one sympathetic character in this book that you wish to like. I have enjoyed the narrator and the other books he has done but in this book there are often long passes in between his readings that get very annoying.

To much character hoping for me , made it through book one. But gave up after that.