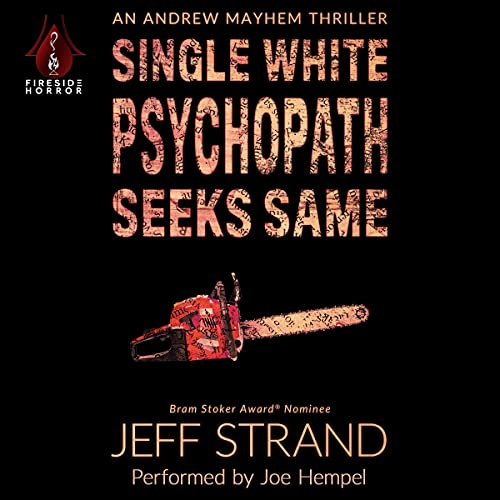 "Sometimes you wake up in the morning and you just know it’s going to be the kind of day where you end up tied to a chair in a filthy garage while a pair of tooth-deprived lunatics torment you with a chainsaw. So as I struggled against the ropes, I can’t say I was all that surprised.”

Yes, Andrew Mayhem, hero of Graverobbers Wanted (No Experience Necessary) is back. Still incredibly brave. Still ridiculously irresponsible. And this time, becoming chainsaw fodder is one of his lesser worries. He’s forced to pose as a serial killer known as The Headhunter in order to infiltrate a group of maniacs who’ve gathered in an isolated Alaskan mansion for a weekend of murderous games. Can he free the potential victims in time...or will he be forced to participate in their demise?

Even more twisted than its predecessor, Single White Psychopath Seeks Same is another outrageous blend of the hilarious and the horrifying, one that will keep you laughing, gasping, and guessing from beginning to end.

I would expect nothing less from Strand & Hempel. They are both phenomenal in heir own right and when you get them together you get a great production. I’m a huge fan of strands work. His wolf hunt trilogy is one of my all time favorite listens and I’m dying to to see it made into the next great set of buddy movies. Hempel’s vocal talent has never failed
To immerse me in an authors world. Think a literary style of Tucker and Dale vs Evil. Andrew Mayhem stumbles his way through some horrible situations with some truly black hearted and demented people with as much ease as Leslie nielson in the naked gun films. From start to finish it’s a hilarious romp through a truly dark set of demented horrors that only the minds of men are capable of carrying out. Enjoy it. I know I did. I was voluntarily provided this free review copy audiobook by the author, narrator or publisher

Mayhem should stop talking to strangers

After the antics of Graverobbers Wanted (No Experience Necessary), Andrew mayhem is back, and gets himself into an even more ridiculous situation: posing as a serial killer. Why? To help a guy find his wife, who’s being held by maniacal murderer who wants to hold a murder olympics for his friends.

This was an even wilder ride than the first book, and I can’t wait for the next chapter to come to audio.