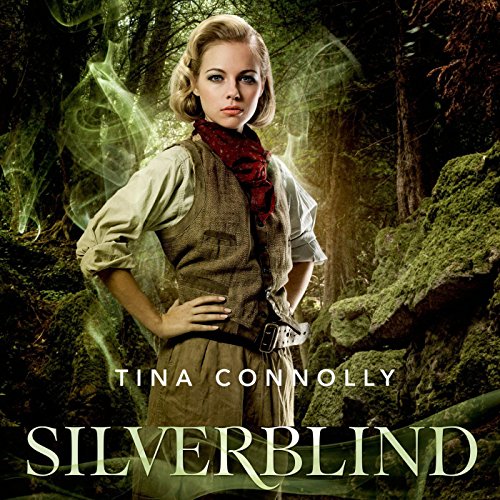 Dorie Rochart has been hiding her fey side for a long time. Now, finished with University, she plans to study magical creatures and plants in the wild, bringing long-forgotten cures to those in need. But when no one will hire a girl to fight basilisks, she releases her shape-changing fey powers - to disguise herself as a boy. While hunting for wyvern eggs, she saves a young scientist who's about to get steamed by a silvertail - and finds her childhood friend Tam Grimsby, to whom she hasn't spoken in seven years. Not since she traded him to the fey. She can't bear to tell him who she really is, but every day grows harder as he comes to trust her.

The wyverns are being hunted to extinction for the powerful compounds in their eggs. The fey are dying out as humans grow in power. Now, Tam and Dorie will have to decide which side they will fight for. And if they end up on opposite sides, can their returning friendship survive?

When Dorie Rochart is refused a job as a field scientist based on her gender, she does what anyone who is half-fey would – she makes herself look like a man (Dorian – a nice touch!), and gets the gig. From there on, she reunites with her childhood friend and adopted cousin Tam (who doesn’t realize it’s Dorie underneath all that Dorian), they’re off hunting basilisks and wyvern eggs, and also saving the world with mythology-based science. If this sounds a bit like Indiana Jones, well, it certainly put me in mind of the man with the hat, with the caveat that the University never seems very far away from where the majority of the field work takes place. There may be no hat and fedora, but there continue to be wicked (and perhaps misunderstood) fairies, mythical beasts, adventure, friendship, and romance. In short, Silverblind is a very fun time.

Like Silverblind’s predecessors, there’s a lot more happening here beneath the skin. The times are slowly changing, and while it may be better to be a woman than it was before, Silverblind points out it’s still a pretty crap playing field. In addition to the gender politics, the government is hell bent on hunting the wyvern eggs to extinction, and committing genocide against the faeries. Many of the characters are more complicated than they might first appear – in addition to Dorie and Tam are haunted by events from their the past, and I was particularly fond of Jack (short for Jacqueline) and Stella, two of Dorie’s friends, as well as Annika, the beautiful foreign student work in the field, but who has had to fight her own battles to get there.

You don’t have to have read the previous volumes in Connolly’s Ironskin trilogy to appreciate Silverblind, but it doesn’t hurt. Each book follows a different protagonist, and generally stands perfectly well on its own, although they’re all connected to each other. Dorie was a child in Ironskin, and Tam was a child in Copperhead. Silverblind is certainly the closing chapter of this series, weaving together threads and characters but also working very well as a standalone adventure for Dorie, Tam, and their friends, rivals, and enemies.

Rosalyn Landor returns to finish out the series, and provides another poised and elegant performance that compliments the story well.

If you’re looking for literature to fit that Downton Abbey shaped-hole in your life but packs a little extra punch, ring the bell for these books, and enjoy them with a nice cup of tea.