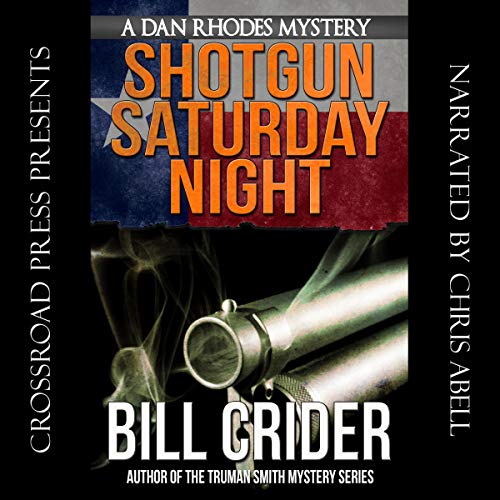 Sheriff Dan Rhodes knows it's going to be a bad day when Bert Ramsey arrives at the jail with a neatly wrapped arm and lays it on Dan's desk. He has another out in the truck, he tells the sheriff, and "a couple of legs, too, but they don't match up".

To Rhodes's relief, the severed limbs - part of a large cache Bert has discovered while clearing brush - are not evidence of a mass murderer at large in Blacklin County, but something more on a par with the usual emergencies the Texas lawman has to deal with: Cows loose in the churchyard, 90-year-old Mrs. Thurman's periodic attacks of "blindness" (which Rhodes cures by sending out a deputy with fresh light bulbs), and the like. Meanwhile, back at the jail, his attenuated employees are bristling about the new deputy, a highly qualified police officer, but a woman, and the air conditioner has collapsed during the heat wave. Plus his personal life has its own problems; does he or does he not want to marry Ivy Daniel?

Then Bert Ramsey is shot to death, and serious crime takes over. A tattoo on the body discloses that Ramsey was once a member of Los Muertos, a violent motorcycle gang from the city, and current members of the gang turn up in Blacklin County. There are questions: Where did the town handyman get the money to buy two color television sets, two VCRs, and a houseful of new furniture? Not to mention six thousand dollars in cash rolled up in a sock in Bert's dresser drawer. Dan Rhodes doesn't have access to the high-tech detection methods of city police - and probably wouldn't use them if he had. Dan has to talk to people and sift the facts from the lies. If he is careful, he believes, and keeps it up, he'll usually get results. "Keeping it up" involves tangling with Wyneva Greer, Ramsey's former girlfriend now living with a mysterious newcomer to the town, Buster Cullens. Buster becomes the next murder victim - of the same killer? Rhodes isn't sure. He soon tangles with the bikers, sustaining a certain amount of damage in the process.

Dan Rhodes is, in the words of Newgate Callender of The New York Times Book Review, "a quiet man, an honest man and a stubborn man", and it seems that no amount of violence is going to deter him from getting to the bottom of the murders in his relatively peaceful and beautifully evoked Texas county.

So glad to see the early Sheriff Rhodes!

If you like the later Dan Rhodes books, you'll enjoy this, too. In the second book in the series, we are introduced to Deputy Ruth, the dog Speedo, and the recurring biker bad guys Rapper and Nelly. Lots of fun, and a great mystery. Before anyone complains about this book being read by Chris Abell, he is a very good reader. This is not read by George Guidell, because Recorded Books didn't produce this recording. As far as I can tell, no one else could be bothered to record the first 8 or 9 books, so yeah for this audiobook production company!