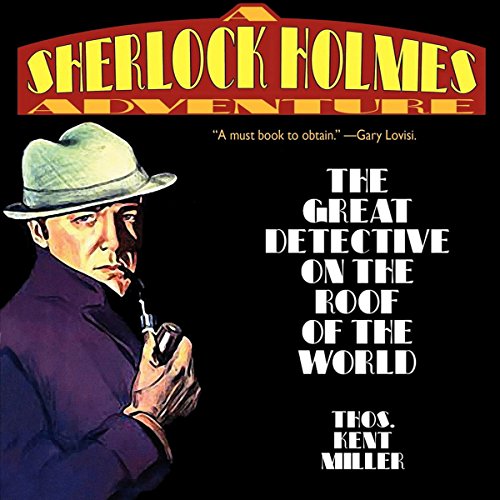 You are about to listen to one of the rare stories to come to light involving "Sigerson", the name Sherlock Holmes went by during the years when the world thought he was dead - his Great Hiatus! This story also has the distinction of being the true first sequel to Horace Holly's She, which was published in 1887 under the byline of Holly's agent, H. Rider Haggard. The only heretofore known sequel, Ayesha: The Return of She, records events that occurred two decades after She. This new tale, then, is a record of the events that took place between the previously published adventures.

What made the experience of listening to Sherlock Holmes in The Great Detective on the Roof of the World the most enjoyable?

I loved this reading. Allen O'Reilly, the narrator/actor, did a fine job. He sounds most congenial and is pleasant to listen to, and I look forward to hearing more of his readings. This is a short book and takes less than two hours to listen to. Miller, the author, and O'Reilly both do a superior job of conveying the strangeness of Lhasa, Tibet, (where people are buried by feeding them to vultures!) more than a century ago. Sherlock Holmes is not mentioned by name, but his presence permeates the whole story. Here he is known as Sigerson, the name he used during his three-year Great Hiatus when the world thought he was dead. Since Dr. Watson is still in London, the story is told from the point of view of Leo Vincey, one of the main characters from two of the most classic fantasy adventures of all time, SHE & AYESHA: THE RETURN OF SHE by H. Rider Haggard.You should know that the paper book version of this story on Amazon.com as Sherlock Holmes in The Great Detective on the Roof of the World. It's odd, but neither product cross-references the other on Amazon.com, probably because the Audible version lists the author as "Thomas" Kent Miller rather than the author's preferred "Thos." Kent Miller. Better yet, both names really should be cross-referenced.Still better yet, for the same price, you can get this exact same short novel bound together with its amazing sequel as ALLAN QUATERMAIN AT THE CRUCIBLE OF LIFE on Amazon.com. This is a SCREAMING DEAL! BTW, this Audible book, as well as its paper versions have a thought-provoking side, producing a sense of awe and wonder as a result of signs of transcendence and markers of divine potency and planning. I call that a lot of bang for your buck!