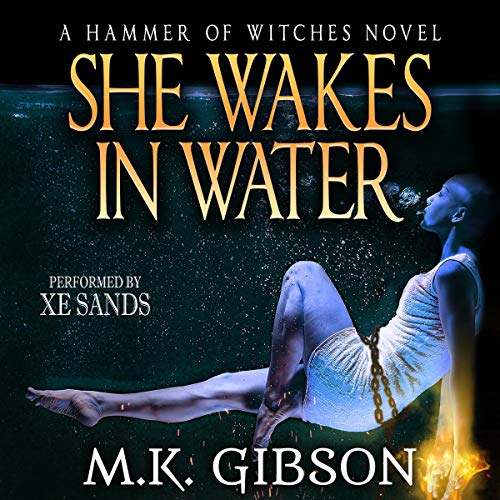 She Wakes in Water

What happens when the heroes go too far?

In the near year and a half following her tragic ordeal in She Dreams of Fire, Agatha “Aggy” Grae and her allies have been hunting the remnants of the Umbra coven. By fighting back against the corrupt witches who imprisoned and killed the Fae for their blood, Aggy and her friends have become beacons of hope. But inner turmoil plagues the team, as the price for freedom is a weight upon their souls.

When an ancient curse begins to target the Fae community, Aggy, Marcus, Cally, and the rest of the team search for those responsible. But they quickly learn that not all enemies are creatures from the hidden world. Some are simply human. And when humans allow their fear to turn to hate, they become capable of the most wicked and heartbreaking acts.

She Wakes in Water is a story of sacrifice, where the heroes must blur the line between right and wrong. When they are forced to team up with an old enemy, the group’s bonds of friendship are tested, and they question whether they are the heroes or the villains of their own story. Through their successes and their losses, they will have to hold on to hope. But is that enough? Or will it cost them their humanity?

There are moments where if felt like watching a horror movie and wanting to scream, "Don't go in the basement!" But we all know that they will go down those steps to investigate the creepy noise. No matter how much I screamed at my phone, Aggie didnt hear my warnings.

I honestly dont understand how such a captivating fantasy story isnt more popular that it is.

The narration by Xe Sands was excellent. Excellent! She easily takes a spot in my Top 5 narrators.
⭐⭐⭐⭐⭐

Here's a look at my crazy moments while listening to She Wakes in Water:

Marcus is jealous... Witch hunters are closing in... the Fae are going beserk... a magically bunny interrupts morning sex... and dwarfs complaining about The Hobbit...🤣 I need popcorn!!!!

Marcus noooooooooooooo!!!! You might have serial killer tendencies but you're still the one for Aggie 😭 Dont give up!

I have a feeling that I'm about to be depressed and super upset with M.K. Gibson... why do authors work so hard to make someone your favorite and then CRUSH your feelings like mashed potatoes 😭😭😭😭😭

Even better than book 1

She Wakes in Water starts off not long after the end of She Dreams of Fire (don’t start here, you must read book one before tackling this book, trust me). Aggy and the gang are still killing off the evil witches of the Umbra coven, but it is taking a toll. How far can you toe the line of violence without becoming that which you fight? That is something some of the gang are dealing with better than others, which is no surprise considering the personalities involved here.

I really enjoyed watching how the different characters struggled with what they were doing and keeping their humanity. Each character had their own ways of dealing with the death and violence, and together, it made the team even stronger and more of a family.

If you know me, you know how much I love character driven stories. I love worlds where the characters and their lives are front and center. Sure, I love a great plot with action and mystery, but it is the characters that will drive me to pick up the next book in the series. That is no different here. I love Aggy to death. She’s such an interesting character with her background of being an orphan that was then raised by two aunts (who are way more than they seem on the surface). There isn’t a single character of Aggy’s gang I don’t love to pieces; they are just all so perfect for each other.

Anyway, in this book, they end up having to pause their attacks on the Umbra coven to fight another enemy, the Knights of Seth. They have a hatred of anyone who isn’t human (like them) and if you’re a human who sides with the “other”, you might as well be on of the “others”. Aggy ends up with some unlikely allies in this fight, but will that be enough? And will killing humans be different than killing witches, even if they come for you first?

This Hammer of Witches series has all the things I love in an urban fantasy series; complex characters, unique and well-developed world, lots of action, a good story and more than its fair share of snark (I can’t help but love smart assed characters, I don’t know what that says about me LOL). This series has all of that in spades. Gibson kept me on the edge of my seat, as there were some plot twists I didn’t see coming. He made me laugh and cry. There is nothing better I can say about a story. If you haven’t tried this series, you’re really missing out. I highly recommend it.

Narration (5 stars)
Xe Sands does a wonderful job with the narration of this series. She has done a great job picking voices for this wide array of characters. Not only does she have to voice male and female voices, but there’s also several different types of fae that aren’t exactly humanoid, so their voices are a bit different. And then there is Ji, Aggy’s very flamboyant gay best friend. Ms. Sands did a wonderful job picking a voice that fits him perfectly. Lastly, there’s Miraj, a magical bunny rabbit who can grow a horn, who has picked Aggy as his human. Anyway, the voices really match the personalities of each character. On top of that, she really brings out the emotion of each scene. I really think she’s a big part of the reason there were tears in my eyes in places in the story. She really made me feel what was going on in the scene. I don’t think you could’ve picked a better person to voice this series.

loved it. Man what an awesome story to a
magnificent world M.K.G has created. loved the evolution of a of a character and an answer to a question I had about them from the technomancer story.

Well it's time to re read the entire collection. Buy this book read this book and then buy the hard cover!!

he does it again

another fabulous story. I'm excited to see where this goes! if you haven't checked out the technomancer series need to check that out to understand farther!

I am thoroughly impressed with the writing styles of M.K. Gibson and how they're able to keep you wanting more with each book. I particularly loved this story because it's a precursor of more to come and you get to follow along with Aggy Grae and her story while meeting some familiar faces from the technomancer series. I highly recommend this to anyone looking for a good, well thought out story.

SHE WAKES IN WATER is the second book of the Hammer of Witches trilogy. A urban fantasy series about a young half-Graeae (those witches from Clash of the Titans) who hunts down witches after a coven of them murders her mother. Having successfully destroyed the coven that did so and has been hunting fae for spell parts, Agatha continues to hunt down evil witches because what else is she supposed to do with her life?

Unlike the majority of urban fantasy series where deciding to hunt down and murder supernaturals would be considered a heroic journey of self-discovery, the choice proves to be considerably more controversial for Agatha. While Agatha is fine executing one witch after the other and they all seem to psychopathic serial killers, the rest of her family has mixed feelings on the subject. To Ji, her best friend, they are just a bunch of murderers themselves. To Miraj, her homicidal intelligent rabbit, it is just survival of the fittest.

Even Marcus, who is a serial killer like Dexter, is someone that has severe issues with how comfortable that Aggy has become with killing. Marcus hates what he is and what he does but feels compelled to do it. He also projects a lot of innocence and goodness on Aggy despite the fact she's been hunting monsters trying to kill her since before she met Marcus.

The big change of this book is the introduction of the Knights of Seth. A malicious Nazi-like terrorist organization armed with advanced weapons and trained to hunt fairies, they have become a genocidal series of attacks on the local fae population. They have a special interest in Agatha and a belief that she is the key to finally destroying the entire fae race.

I really liked the development of the characters involved with much being devoted to showing that Agatha can't adjust to a normal life and her idea of it was hunting down witches with her friends. The fact they don't want to devote themselves to hunting down monsters for the rest of their lives shows the vast gulf that exists between their worldviews. She's not Spider-Man and romanticizes "normality" but wants to be both a band playing teenager as well as a slayer of evil.

There's a little bit of romance in this story that I really enjoyed as well as a interesting LGBT plotline. Agatha is bisexual just like her friend Ji is gay and these elements are treated as completely normal in the setting. Things take a few twists and turns in the ending but I liked having this element developed. There's a fun "meet cute" element where Agatha meets Kacey after initially flirting with the dude on a date with the latter.

Another interesting fact is the book contains villainous police officer/witch, Vanessa, who has been ordered to protect Agatha despite the fact most of her coven has been murdered by self-said witch hunter. She's a narcissistic psychopath with no redeeming qualities whatsoever but not always wrong in her observations about the gang. Watching them forced to team up was an interesting storytelling beat.

The book is full of actions, the villains completely despicable, and there's a pretty harsh body count by the end of the story. I mean, it doesn't quite reach Red Wedding levels of disaster for the good guys but it's not far off either. Michael Gibson isn't afraid to kill his darlings and that adds significant tension to things. I really enjoyed this book and I look forward to the third installment. I read the Kindle version and also listened to the audiobook version. As such, I have to admit I prefer the audiobook version and think Xe Sands did a fantastic job.

this is a Shakespearean tragedy

Twists and turns, Epic heights and folly, sorrow and bliss, a must read for all

This series from MK Gibson is my absolute favorite! this book cranks up the action 10 fold from the first book and the character development is devastating and awesome! highly recommended!

the depressing, if necessary 2nd act

For the heroes to return triumphant in Act 3 of a play they must suffer defeat in Act 2. That's what this book is. It is Act 2. I am a big M.K. Gibson fan. That said, this book was not at all satisfying.