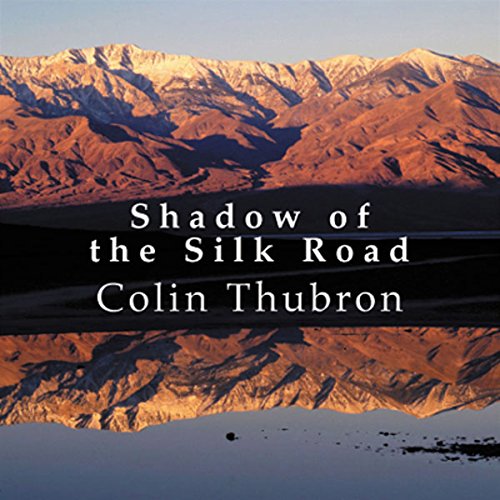 Shadow of the Silk Road

Out of the heart of China into the mountains of Central Asia, across Northern Afghanistan and the plains of Iran into Kurdish Turkey, Colin Thubron undertakes a journey along the greatest land route on earth: the Silk Road. Travelling 7,000 miles in eight months, he traces the passage not only of trade and armies, but of ideas, religions and inventions. With a gift for talking to others, and of getting them to talk to him, Thubron meets some fascinating people and encounters some of the world's discontented margins, where the true boundaries are not political borders but the frontiers of tribe, ethnicity, language and religion.
©2006 Colin Thubron (P)2007 Isis Publishing Ltd.
Biographies et mémoires Asie Moyen-Orient Écritures et commentaires de voyage
Afficher plus Afficher moins

I never listen to a book twice. As soon as I finished this book, I listened again and enjoyed it as much the second time. His words are like poetry and his descriptions of the places he visits and people he meets are unbelievably beautiful. I wish Audible would have more of his books.

Colin Thubron is a magnificent writer and historian. His prose is lyrical, his perceptions astute. I have recommended this book to several people, some of whom are writers themselves, and they have all loved it. It is a fascinating journey through history told with a deep understanding of the cultures and their history. I wish that Audible would record his other works, particularly "Behind the Wall" specifically about China.

Breathtaking, at all levels.

This book is wonderful. I have just listened to it for the 2nd time and found it richer and more interesting than the first. The author has good knowledge of the cultures he travels thru, and a very engaging way of writing. He touches on (1) the people he meets along the way, (2) the history of the area itself, and (3) his personal experiences (he can evoke a mental painting of what he sees and hears with a minimum of words - very rich). In addition, the lands he traverses are so mysterious and exotic - he truly made my world seem larger. The readier is tops, with an incredible array of voices and expression. He makes the book come alive. Buy it, listen to it, and take your trip to mysterious parts of our world which are certainly the silk road less traveled.

This travel journal is an amazing trip in an amazing part of the world. You get a real flavor of the many regions and their inhabitants but the style is somewhat dry. The author makes a point of contrasting what the histories say of various locations and what the reality is now. It can be a bit discouraging and easy to walk away with a hopeless feeling. I read his other book "heart of central asia" and enjoyed it as well. A good book if you are planning to visit the area or just want a better understanding of what we are up against in that region.

a travel journal. an historical account of ancient civilizations along this also ancient trade route. a cultural and an anthropological report. and an excellent reader. what more could the armchair traveler want in a book?! no regrets here! highly recommended.

An excellent and informative book

Mr. Thurbron uses words as an artist uses paint to paint a beautiful landscape. I could easily "see" the places and things he was describing and the people he met along the way. The portion of the book on Afghanistan and Iran gives an excellent insight into the world we find ourselves in at the moment...an insight that is quite different than what the common belief is on both sides.

I'm going to listen to it again after I finish this review. My mind wants to wander down the Silk Road again.

A lot of road time

Lots of historical information in a serious story. I did not get the feeling that the author enjoyed the trip. Much more "just the facts". An interesting view on the age of religious mix in various regions and relative strength of belief and how that is represented by the individual. I was reading it for the history of the apple.

According to Colin Thubron, ancient Romans, even while wearing silk garments from the East, imagined silk was harvested from a plant, and Easterners lived in an unreachable paradise. Meanwhile, the Chinese suspected Rome was a land without wars. Trade along the Silk Road had the aspect of a relay race. No one merchant traveled from one end to the other. Author Thubron decides to make the entire journey (east to west) and take us along for the ride. The Silk Road, we discover, wasn't just an extensive trade route but an elaborate conduit allowing for an interchange of cultures and religions along with material goods. I intend to read this a second time. Magnificent book!

A lyrical trip through Central Asia

Beautifully written and narrated, this description of one man's journey in the footsteps of the ancient traders along the Silk Road is full of unforgettable sights, experiences, and characters. I listen to it whenever I want to be transported to another world where familiar human dramas are played against the backdrop of very unfamiliar times and places. It is one of the best expressions of I have found of the meaning that travel can have in the human experience. I wish the author would write another hundred or so books like it.

Some pronunciation issues - but a fun story.

The narrator does an absolutely miserable job with pronunciation of chinese words - if you're familiar with China, you'll find this a bit frustrating and frequently ask yourself where he's talking about. I wouldn't expect perfect mandarin pronunciation, but you could anglicize "xinjiang" as "shin jong" (shin like the part of your leg, jong like in Mahjong). I have no idea how to write the word based on the narrator's pronunciation.
This one isn't nearly as interesting to me as Jim Roger's excellent "Adventure Capitalist" which would have been documented about 3 years earlier, and does also spend a lot of time discussing that portion of the silk road.
The book sends an especially lengthy time covering the China portion of the journey, which think many will appreciate. Last, I personally prefer that the author spend more time talking about places he went and things that he heard, and let the reader decide the emotional impact.
If you're an old china hand who's been dreaming of retracing Marco Polo's journey, I would rate this a 3 or so - you'll probably not get the coverage you're looking for. If, on the other hand, you're looking for an exotic story about a far away locale and dream of one day making this journey with a guide, then this one is 5 stars all the way.