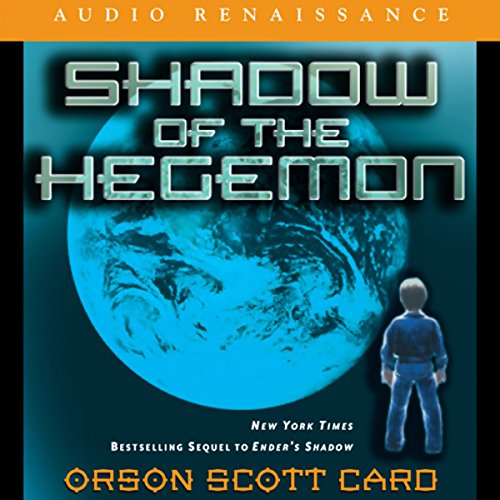 Shadow of the Hegemon

Shadow of the Hegemon

Ender's Game told the story of the boy "Ender" Wiggin and his hard-won victory over an alien race that would have destroyed the Earth and all of humanity. But Ender was not the only child in the Battle School. He was just the best of the best. In Ender's Shadow, Orson Scott Card told the story of another of those precocious generals, the one they called Bean - the one who became Ender's right hand, his strategist, and his friend.

And now Card continues Bean's story, and finally tells a tale long awaited by millions of fans. At last we learn what happened on Earth after the destruction of the Hive Queen's worlds, after humanity no longer had a single enemy to unify the warring nations. This is the story of how Bean turned away from his first friend, Ender, and became the tactical genius who won the Earth for Ender's brother, Peter, who became the Hegemon.

Great Story with the worst Audio ever recorded!

I know many other reviews have spoken about it....but if you took a cassette recorder with an old cigar length external microphone, and you recorded audio for a book, then have it read by several different people who play all the characters at some point for no reason, let it age for 30 years, then dub it to CD..... and when the audio drops out so low you have someone reread it in a different voice over the top of the original recording, you have Shadow of the Hegemon. Wow....how could they let this go out and then never fix it. This is a $35 audio book!!?? To quote the great Gomer Pyle "For shame, for shame for shame"

The story however kept my attention in between audio drops. The story has continued and fortunately is so strong I managed to keep listening through the horrid audio.

Petra...is one hell of a strong character!....Bean is Bean....brilliant, arrogant, and, just a little kid.

Gabrielle de Cuir....I think someone called her "Miss Dramatic" in a different review, is at it again...ooooooooh the poor child, oooooooooh so sad. Geez. Does she mispronounce Achilles name on purpose? When she pronounced it as Asheeel in prior books? Don't know. I know I know, it's the French pronunciation. She just confuses things even more.

Scott Card has written another in depth character driven story
(even though he gets preachy as usual) ..that keeps me wanting yet more and more. Why he would let this mess of a recording stay online literally for between 5 to 10 years or more is crazy!! Fix this thing!!

What is very disappointing is the work done to transfer the title to the audible format. The title plays very muddy, and I had to set my treble all the way up, and bass all the way down. In addition, there are several places where the tone suddenly shifts to a high pitch, stays that way briefly, then jumps back to the muddy low tone of most of the work. Really, Audible, this recording needs to be recaptured from the source material.

Note that if you download this book, there is a (possibly confusing) technical flaw. In part I, at around the 3:37:55 mark, the recording seems to pause, then begins repeating the last half-hour or so (picking up at what the listener heard starting at around the 3:09:16 mark). The narrative then continues smoothly through, but can produce odd feelings of deja vu. ;) So, at the 3:37:55 mark, when you think, "Didn't I just hear this part?!" Just fast-forward up to about 4:06 and you'll be fine.

Note the word CONTINUES. This is a wonderful book, if you have fallen in love, as I have, with these characters. My suggestion is to read "Ender's Game"...then "Ender's Shadow"...then proceed to this book. "Speaker for the Dead"(my personal favorite), although an amazing book in itself does not need to be read to thoroughly enjoy this one.
What I find so fascinating is, how Card, thru these sequels and/or parallels, takes characters that you thought you understood and knew, and gives them dimension and substance, that of course, you didn't know, because he never told you. I personally have alway enjoyed his characterizations, more than the story, but because Card makes me care about the characters so much, I then care what happens to them, hence the story then becomes important. I always listen twice to each book, because he tends to foreshadow so much that I sometimes "miss" things the first time around.
If you haven't at least read "Ender's Shadow", don't read this! You have to know and love, or know and hate these characters for the full savoring of this amazing "world" that Card has created for us.
Now for me, with excitement and anticipation, it is on to "Shadow Puppets". I can only imagine its delights. I hope your journey is as delicious as mine!

Recorded in a tin can?

This is an excellent story (as are most by Mr Scott Card), read by extremely talented people. Then the money ran out, or something. It's strange that the sound can be so shabby in this day and age. And the music? SHEESH! The author and actors work hard to create an eerie, nail-biting mood, then in comes happy elevator music made on a kiddie keyboard from the 80's. Gone is the suspence!
Audible usually makes me feel that the books I buy here are well worth the price. Not this one though. I got sorta ripped off.
I still recommend this one though. Just be warned of the tinny, unprofessional production. Five stars for the story. Five stars for the actors. Half a star for the guy who was responsible for the sound and music.

I agree with the main annoyances of the recording previously posted by many others. There were just too many glitches in the production for them to be overlooked. The story was decent, but the audio blunders were very distracting. This book needs to be re-recorded with everyone on the same page and properly edited. A free download of an acceptable recording, for those of us who purchased the original, would also be nice.

I'm a huge fan of the Ender series, and I have had the good fortune of listening to the entire series thus far on audiobook (which as Card says is his preferred format). This is another fantastic story involving Bean, who is now living on Earth after the Formic War.

Unfortunately, the production quality of this audiobook is extremely poor compared to the previous books in the series. Initially, the audio was very poor quality and the volume was very low. While the audio levels eventually became normal again, the audio quality was often very poor with certain voice actors.

Multiple mispronunciations plagued this performance, which varied from minor to major distractions. The word Hegemon (being the title of the book, no less) was mispronounced throughout the entire audiobook, and was crudely dubbed over with the correct pronunciation by what sounded to be a different actor.

Finally, the name of the antagonist was severely mispronounced throughout the book, with the exception of a few correct pronunciations strewn intermittently throughout the performance. Achilles, the Battle School failure who later became involved involved in global politics, was pronounced phonetically, instead of with the correct French pronunciation "a-SHEEL". This pronunciation was made very clear in Ender's Shadow, so it was very hard to become accustomed to the mispronounced version. At first, I thought that it was being mispronounced because the character being spoken through did not know the correct pronunciation, but I soon realized that was not the case. The same voice actor would pronounce it correctly in one part of the book, then completely the opposite in a later part of the book.

In summary, I would greatly recommend this book, but do be aware of the audiobook's multiple problems. I am very surprised that this has not been addressed yet, and I hope it is republished in the future.

I really enjoy Orson Scott Card's stories but unfortunately I had a science fiction bias when I bought this book. There is in fact little to no science fiction in this book. It's Earth bound and in the future, that's it. Good story though.

The production is poor. Everyone has their own preferences as to how narration is done but I'm sure all agree that the editing of corrections and music are like loud bangs in a quiet room. Clearly it wasn't until the end that someone pointed out the mispronuciations of names and words. The solution of letting some instances slide, warbling others, and dropping in mismatched re-records was just plain BAD. You can get through it but you may feel you didn't get your money's worth.

Would you try another book from Orson Scott Card and/or the narrators?

I have listened to and enjoyed many of Orson Scott Card's book by this creative team. While I enjoyed the books (with one notable exception), the performances and production have always been top notch. Until this book.

The recording and production of this book are the worst of any Card novel I've heard. Apparently no one could decide how to pronounce "Hegemon" during recording, but someone obviously went back in and overdubbed the pronunciation of that one particular word, over and over again. Plus the music was terrible cheesy, and the overall sound quality was not up to spec. Disappointing from a group I have known can produce top quality recordings.

Bean & Petra come to the forefront

This book takes place on Earth after the Bugger War and per the author himself this book was inspired by a favorite board game from his childhood: Risk. This book presents to the listener a global game of Risk where the main players are Achilles and Peter Wiggen along with a few of the Battle School kids from Ender's Game. Political and Military maneuvering form the core of this story and Orson Scott Card has clearly put some thought into the geo-political scenarios he presents.

This book also flushes out the back stories of both Bean and Petra and the relationship between them. Bean winds up learning many key things about his own background as the story progresses and the way you view him will fundamentally change. I found Bean's backstory to be more interesting than I expected and for me this was the better part of the story.

Be warned that the recording is pretty poorly done. The readers are good but it is obvious that certain words like Hegemon were mispronounced during the recording. The solution deployed here was to edit in a different reader saying the word correctly after the fact and this makes for a pretty poor listening experience.

So if you can tolerate the poor recording and are interested in learning more about Bean and Petra then give this one a go but if you are looking for more space based Sci-Fi then you should look elsewhere.