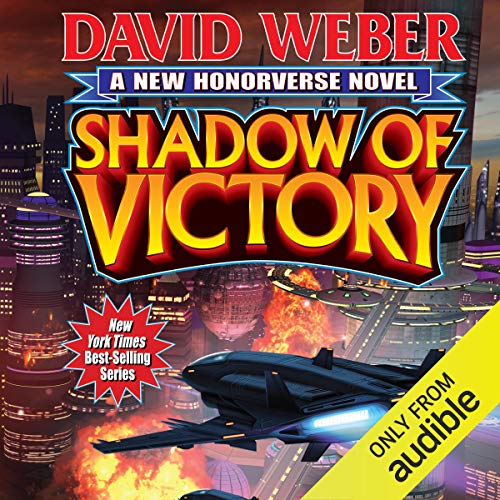 The Mesan Alignment is revealed, and for Honor Harrington and the Manticoran Star Kingdom, this means war!

The Mesan Alignment has a plan - one it's been working on for centuries. A plan to remake the galaxy and genetically improve the human race - its way.

Until recently things have gone pretty much as scheduled, but then the Alignment hit a minor bump in the road called the Star Empire of Manticore. So the Alignment engineered a war between the Solarian League, the biggest and most formidable interstellar power in human history. To help push things along, the Alignment launched a devastating sneak attack that destroyed the Royal Manticoran Navy's industrial infrastructure.

And in order to undercut Manticore's galaxy-wide reputation as a star nation of its word, it launched Operation Janus - a false-flag covert operation to encourage rebellions it knows will fail by promising Manticoran support. The twin purposes are to harden Solarian determination to destroy the Star Empire once and for all and to devastate the Star Empire's reputation with the rest of the galaxy.

But even the best laid plans can have unintended consequences, and one of those consequences in this case may just be a new dawn of freedom for oppressed star nations everywhere.

Would you listen to Shadow of Victory again? Why?

yes, on my next read through of the series before the next book comes out. Not looking forward to it

Who would you have cast as narrator instead of Kevin T. Collins?

not in a good way, wrong reader

I don't review books much. I have enjoyed the series, but having another author come in and read instead of Jay Snyder or Allyson Johnson makes the book be a much poorer listen. I like to listen to a book while doing other things when I can't physically read the book myself. You get used to how one person pronounces names and words. Or Character voices. Kevin T. Collins was the wrong choice for this book. This books needs to be rerecorded.

this is a rehash of other books

Sadly David weber has simply went back yet again in the story line and told the same story from a few different perspectives. he isn't actually advancing the story line at all. Huge disappointment. Years of waiting for the next volume and he gives his readers a rehash of previous story lines.

Extremely tedious to listen to.

What could David Weber have done to make this a more enjoyable book for you?

I understand that Weber wanted to create multiple distinct settings to immerse the audience in, but the overly heavy-handed use of foreign words makes this extremely difficult to follow unless you're drawing a string-chart and constantly referencing it. At some point about 5 hours in, every time I heard a foreign word I'd stop listening and just wait until Weber discussed the atmosphere so that I could understand what was going on.

Did Kevin T. Collins do a good job differentiating all the characters? How?

This was a serious shock after binging the whole series all this year. I initially hated the previous narrator, but I ~eventually~ grew fond of her characters and come to expect their voices. This new narrator has a completely different idea on how the characters sound and how they portray themselves.

Weber spends way too much time focusing on the names of organizations in foreign languages to the point that you will easily lose track of where you are, who is talking, and who they represent. I suggest you stop listening every time you hear an overly long foreign name and just assume it's either "The Rebels" or "The Empire" and be presently surprised when you picked the wrong side.

If you could sum up Shadow of Victory in three words, what would they be?

Book is Awesome (narrater not so much)

Soo, The book is good. But ruined, like one of the SafeHold series with a really awful narrator. He is good at childrens books, and he should stay there. keep him away from scifi.

the narrator sounds like he's trying to get his master's degree in the pronunciation, combined with all of the Czech and Polish names and words it made it hard to follow along. he gives every Manticore an effete British accent

Great book, not so hot narrator.

The narrator sounds like he is hacking up hairballs when using some accents. His performance made it difficult to enjoy the book. Audible, please bring back Alison Johnson to narrate Weber's books.

You've read 90 percent of this already

I wouldn't bother with this one. One of Weber's failings is a tendency, every few volumes, to gather up cuttings from the floor that didn't make it into the last volume, and present the same story from a slightly different perspective. There are some nice nuggets there, but for myself, I really wish Weber would FINISH THIS COLLOSSUS before he dies.

Has Shadow of Victory turned you off from other books in this genre?

He could have studied up pronunciation for various words used by prior narrators.

Was Shadow of Victory worth the listening time?

Read only if every little detail is important to you. This volume seems composed almost entirely of stuff that was edited out of the original. It does not move the story FORWARD as much as an inch.

Would you try another book from David Weber and/or Kevin T. Collins?

Weber: yes, but he's on probation.
Collins: not unless I was desperate.

Would you ever listen to anything by David Weber again?

What didn’t you like about Kevin T. Collins’s performance?

Breathless and overdramatic. The same way he did trauma to Midst Toil and Tribulation in the Safehold series.

Disappointment in the failure to advance the story.

Weber has lost his way

I don't put aside books often, but I gave up here. Nothing happens of interest. The first chapter is almost half made up words with very little relevant plot or any characters to care about. It seems the Honorverse side novels are just filler and noise. Weber should focus back on main characters and just summarize everything that happens in Talbot and The Verge as asides in the main story. This is the last book in this series I'll purchase.

Waste of a credit!

What disappointed you about Shadow of Victory?

The book felt like it was pieced together with what ever was left on the cutting floor of the past 3 books.

First time i felt disappointed by a David Weber Book.

After enjoying the last book I was looking forward to how the story would evolve in this book. Sadly, I had to encounter that the timeline of this book starts about three books in the past. It deals with the story of the Talbert cluster and the work of Firebrand to undermine he credibility of the Manties. During the course of the book there are several time jumps which come without any explanation.
After 3/4 of the book, we arrive relatively close to the current events of last book, ending about 5 hours after the last. I do not want to spoil too much for people who have not listened that far, that's why I choose these vague and strange wordings.

In total the only annoying thing is the continues usage of Czech terms when the book continues a story of Czech origin. After the use of a Czech word, it is always translated. This probably is good, but I gave me a bad feeling. Why not use the English word in the first place.
this book is no a waist but I can not understand why I was not written right after the Talbert clusters book and the rest of the side stories that explain more about the events that lead to the finally were split. It felt to me that only about the last third of the book was really fitting the point we were left of at the last book.

I would recommend to listen to this book right after the book at the Talbert cluster and stop it about 2/3 in, than continue with the other books and come back to it after the last.

Great story but after all other stories being read by Allyson Johnson the new speaker sounds strange.

The narrator makes a horrible hash out of non-English names and term - of which there are many in this book.
Collins is a quite good narrator as long as the language is 100% English.
However, non-English terms (e.g. lots of Slavic terms and names in this book) get pronounciated and spoken completely out of the normal flow of sentence and language.
This makes for a quite disruptive listening experience...