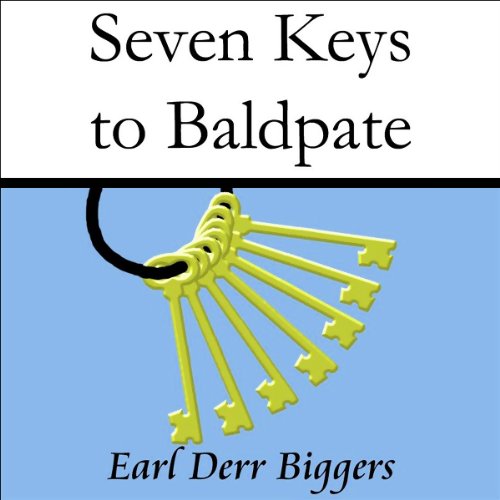 Known for his comic sense, Earl Derr Biggers was one of the foremost writers of mystery and detective stories in this country. To his friends he was known for his comic sense. Seven Keys to Baldpate was his first novel and became extremely popular. In it, a famous author visits a closed summer resort at Baldpate Mountain in the middle of winter. He is looking for peace and quiet so that he can write his next book.

However, before his first night is over, numerous unexpected visitors begin to fill the hotel, on strange and sometimes dangerous missions. The author finds that a fortune is at stake and that his visitors will do anything to possess it. Before the end of the week, there is gunfire, bribery, fights, and hidden truths are unmasked.

Seven Keys to Baldpate is an old-fashioned mysterious melodramatic farce. It was so popular that it was made into an extremely popular stage play by George M. Cohan and became the basis for no less than seven films.

A farce more than a serious mystery but very funny.

Downloaded this book in spite of the low "stars" at the time and I'm glad I did. Pure escapism, of course but great fun. Well done and well read. To each his own, I guess.

Did not like the narrator, but loved the book

What would have made Seven Keys to Baldpate better?

This is the first bad experience I have had. The narrator's voice was not appealing and while it wasn't monotone, he did not have a good portrayal of the characters, at least for as far as I could listen. I couldn't make it longer than 10 minutes.

Has Seven Keys to Baldpate turned you off from other books in this genre?

The book itself is great-I read it instead.

Who would you have cast as narrator instead of Jim Killavey?

I don't really know, but his voice did not fit the character at all

Couldn't get past the narration

What would have made Seven Keys to Baldpate better?

A narrator with a pulse. If I had known about the "return" feature at the time, I would have turned this baby around.

Who would you have cast as narrator instead of Jim Killavey?

Who Can Listen Long enough?

I sorry this is my first review of a narrator and all I can say is after 3 chapters I gave up listening. It became impossible to continue listening to someone read with so little consideration for the author or the work. I suspect the book was read cold to the recording otherwise the narrator has some very odd ideas about adding commas and periods for the author.

The typical reading cadence of the first chapter is a noticle pause after EVERY 3 to 4 words. I know this can't be the literal truth but it is certainly my subective truth. It passes distracting within 5 minutes and becomes mroe than irriatating before the first chapter is completed.

By the third chapter the narrator improves but not enought to allow me to even remember the storyline. The generally flat intonation was a distance second issue to the weird cadence.

Someone at audible should have proofed this before it was allowed release.

I know how this review must sound but it appears I payed for the privlege. Read the book perhaps but for what it's worth don't listen to this edition.

A fun story marred by monotony

I have enjoyed the times I have spent with Earl Derr Biggers, and wanted to enjoy the audiobook of Seven Keys to Baldpate. Alas, it was not to be, as the narrator reads the lines like someone taking inventory.

Afterbpushing along many hours, I gave up, googled the book, and ruined the ending. Spoiled it myself, but I claim I was pushed by narration like a dripping faucet.

Beware, but mostly, begone from this version

Witty, fun book to make you smile with mystery

Would you listen to Seven Keys to Baldpate again? Why?

The meeting with old Mr. Quimby. Poor guy, he's so baffled and Billy McGee is hilarious.

There have been a few films made from this book - none of which are as good as the book.

The narrator is excellent. I'm not sure why other people didn't like him. I think he captured the spirit of Billy McGee perfectly.