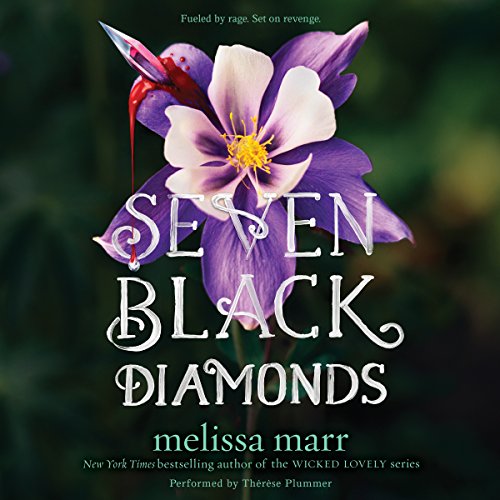 Lilywhite Abernathy is a criminal - she's half human, half fae, and since the time before she was born her very blood has been illegal. A war has been raging between humans and faeries, and the Queen of Blood and Rage, ruler of the fae courts, wants to avenge the tragic death of her heir due to the actions of reckless humans.

Lily's father has always shielded her from the truth, but when she's sent to the prestigious St. Columba's school, she's delivered straight into the arms of a fae sleeper cell - the Black Diamonds. The Diamonds are planted in the human world as the sons and daughters of the most influential families and tasked with destroying it from within. Against her will, Lilywhite's been chosen to join them...and even the romantic attention of the fae rock singer Creed Morrison isn't enough to keep Lily from wanting to run back to the familiar world she knows.

Not quite what I expected

First, let me say that I loved Therese Plummer and honestly if it wasn't for her narration I wouldn't have kept going. As far as the story goes, I think it had a lot of potential. I had high expectations and they just weren't met. I knew it was a series but there wasn't a lot that happened throughout as far as action and the story didn't really go anywhere. Most of what happened was expected, there really want much surprise which was ok. From the description I had just expected a lot more. I thought we would hear more about the team and see them on excursions or develop in some way and they just seemed kind of flat. I enjoyed them for the most part, but a little undeveloped. I guess my feelings are all over the place since it took me so long to finish this book. It was ok but not a favorite. I will read the next book though.

Why does the narrator make Lilywhite Irish? It doesn't say that anywhere and it's like Therese completely went for creative liberty on that. I couldn't enjoy the story because I was trying to find any little detail that could suggest Lily is Irish. Her father runs a mob so they must be Irish? What? Why? How?

I FOUND THIS AUDIOBOOK BY LUCK JUST LAST NIGHT AND WAS IMMEDIATELY TAKEN BY THE GOOD NARRATION WHEN I PLAYED THE SAMPLE FIRST. THEN, I REREAD OVER THE SUMMARY WHICH WAS INTERESTING TO ME AND DECIDED TO GIVE IT A SHOT. WELL, IT WAS SO EASY TO GET INTO . THE NARRATIVE IS EXCELLENT AND THEN THE STORY LINE WAS NOT YOU'RE NORMAL AT ALL AND WAS WONDERFULLY DONE. I AM SO THANKFUL TO HAVE FOUND THIS AUDIOBOOK AND THERE JUST DO HAPPENS TO BE 1 MORE TITLE IN THIS SERIES FOLLOWING THIS ONE WHEN I CHECKED SO ITS NOT OVER HERE
I GET A BIT MORE . I ENJOY A SERIES WHEN IT IS A STORY I'M IMMERSED INTO AND IT WAS VERY SATISFYING!!!! I DEFINITELY SUGGEST THAT THIS AUDIOBOOK IS TRIED AND THE NARRATOR IS EXCEPTIONAL AS HERE REPUTATION ALREADY WILL SHOW WHEN YOU LOOK UP HER NAME. SO I SINCERELY HOPE YOU ALL ENJOY THIS SERIES OF TITLES HERE WHILE AWAITING YOU NORMAL FAVORITES. ITS REALLY A GOOD BOOK, OR BOOKS:)!

I really enjoyef this story. It surprised me because I thought some things were going to be like how most tropes go,but they weren't. It was nice. I liked it. This book made me smile & laugh many times :)

The narrator spoke a bit too softly for me and at times it was so whispery I could barely understand what she was saying.

I love the juxtaposition of modern world with the classical faery mythos; the narrative it creates is very strong and interesting. It's such a great change to read a book with my "niche-interest mythology" without having to wade through dense purple prose in High Fantasy.

The traditional Seelie and Unseelie Courts is something that I don't see much in modern literature with faeries; that was very cool! I really loved how Zefer very clearly stated that the Courts aren't good versus evil, rather two tendencies which were far from absolute truths on morality, which is how it is in the original mythos.

The setting, and the explanation of how the world became what it is, is extremely interesting and was well-integrated into the plot since the very beginning. I liked how well all of it fit together plot-wise and also with the characterization both of the Hidden Lands and fae there.

I wish that we could have gotten more characterization on the Diamonds; I feel like I don't really know any of them, even Lily. I'm very curious about all the full fae too!

I liked that there was a traditional fey element mixed in with the new world. I wish they would have expanded more on how the mortal society is run.

The most interesting aspect is that the human world seems to have regular laws and functions similar to ours but it has risen out of the old world (ours) and is still growing.

Could you see Seven Black Diamonds being made into a movie or a TV series? Who should the stars be?

I don't know yet if I could see this as a TV series. There are defiantly enough main characters to do one though. I look forward to reading the sequel so I can know the story better.

need the continuation real soon, so hate to wait.

loved it and i want more..lol
ahe truthfully inspired me to write a book, though i can say i like her stories more then my own. i hope to be half as good as her one day.