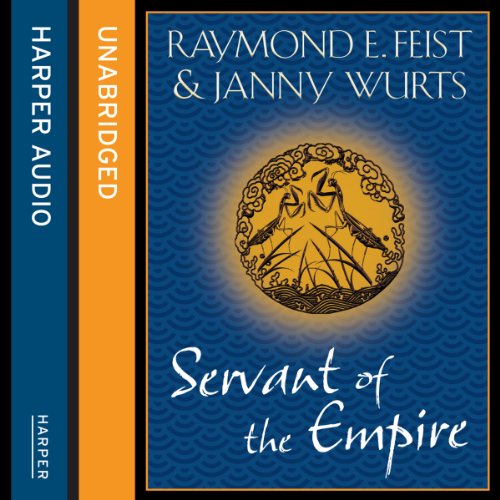 Servant of the Empire

Nobody knows how to play the Game of the Council better than Mara of the Acoma. Through bloody political manoeuvring she has become a powerful force within the Empire; but surrounded by deadly rivals, Mara has to be the best simply to stay alive. But Lady Mara must contend with battles on two fronts: in the hotbed of intrigue and treachery that is the court of Tsurani; and in her heart, where her affection for a barbarian slave from the enemy world of Midkemia leads her to question the principles by which she lives.

Servant of the Empire is the second in Feist and Wurts' wonderful epic trilogy - one of the most successful fantasy collaborations of all time. The trilogy concludes with the third book, Mistress of the Empire.

Second part of an epic trilogy

Servant of the empire is the second book in the Empire trilogy by Janny Wurts and Raymond E Feist, two epic writers in my view.

Mara continues to grow the Acoma name, and her list of enemies while she is at it. Although fighting tradition, she still struggles to overcome most of the beliefs she was brought up with. She falls in love in this book with Kevin, who teaches her a lot about doing things outside of the norm. She survives many assassination attempts but unfortunately loses loved ones along the way. Despite this, she makes many allies along the way.

Each moment is a piece of the puzzle that builds up the epic plot. Full of action, romance, and adventure, the servant of the empire was entertaining and clever. Although not as brilliant as the first one, the second part is still good and worth the listen. I enjoyed the romantic moments in between the political games being played and loved how Mara’s character grew in this story.

The narrator was once again brilliant. Im so glad for the continuity from the first book.

I highly recommend this epic story, and trilogy.

Which character – as performed by Tania Rodrigues – was your favorite?

She does a great job of Mara

It did make me teary eyed in places

I got so caught in the tale I cried and hoped and felt joyful then grieved as Mara dealt with each twist and turn, it's so well written, I love that the characters are full with faults which just make the experience better.