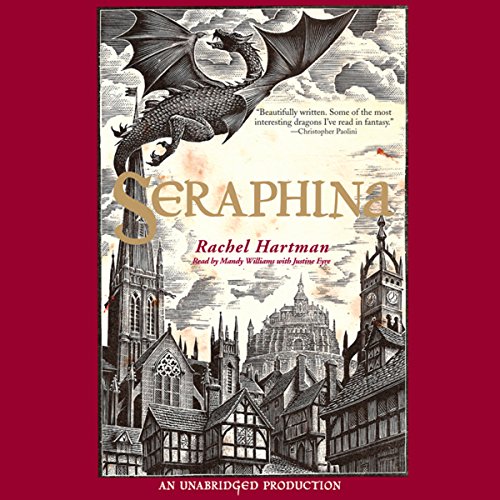 Lyrical, imaginative, and wholly original, this New York Times best seller with eight starred reviews is not to be missed.

Rachel Hartman’s award-winning debut will have you looking at dragons as you’ve never imagined them before....

In the kingdom of Goredd, dragons and humans live and work side by side - while below the surface, tensions and hostility simmer. The newest member of the royal court, a uniquely gifted musician named Seraphina, holds a deep secret of her own. One that she guards with all of her being.

When a member of the royal family is brutally murdered, Seraphina is drawn into the investigation alongside the dangerously perceptive - and dashing - Prince Lucien. But as the two uncover a sinister plot to destroy the wavering peace of the kingdom, Seraphina’s struggle to protect her secret becomes increasingly difficult...while its discovery could mean her very life.

"Will appeal to both fans of Christopher Paolini’s Eragon series and Robin McKinley’s The Hero and the Crown." (Entertainment Weekly)

My initial reaction to this novel (a week or so after I finished listening to it) is to reflect on my connection with Seraphina. A girl with an amazing talent who actively seeks to hide her talent in order to not draw attention to herself because of a difference that could get her killed. I am surprised that in a world so fantastical it requires a great deal of careful sculpting and building that my first thoughts are of this character. Seraphina's struggle helps ground the world. Seraphina, at the beginning of the novel, has defined and viewed herself based off of an identity that she didn't choose but was born with. She is caught between two races with each not even wanting to acknowledge her existence. She has grown up with shame and without a true connection with anyone just because she is alive. In our world people often treated differently based on factors they were born with --- I'm sure I don't need to tell you--- the reality of these situations just really hit me on an emotional level.

The world building: the religion, languages, differences between cultures--are very well done. I thought it was beautifully written and well thought out.

I don't want to comment too much on the romance--but it is a slow build and felt natural. I--I read another review that said she could not remember was Lucian looked like...and neither can I. Their relationship is built on similarities and understanding--and not without it's issues---really refreshing.

And intrigue--can this fragile balance between the dragons and the humans be sustained? Who is plotting the downfall of the peace and why? Can Seraphina help the Prince with his investigations without giving up her secret?

If you like fantasy---I can't imagine a reason why you wouldn't enjoy this read.

It is a better read than a listen.

I began listening to this book and I must say that I like the story very much: the mythology, the backstories, the characters, the emotions- Rachel Hartman is an excellent storyteller, hence the 4 stars. However, for me, this is not a book one just LISTENS to. I found myself having to rewind the book a couple times because I did not understand something, but I decided to give up and carry on with listening to it. I am a college student and often like listening to something while taking the bus to and from school, but this just did not do it for me.
For me, this is a book that must be read and if it is to be narrated, the narrators must do it justice and for me the narrators did not. So a word of advice- buy the book itself because it is a great investment, the audiobook is not.

Pleasantly surprised. Story has everything in it

This story has everything: Political intrigue, mystery, internal conflict, music, prejudices, humour, romance and Dragons. What more could you want?
I was hesitant by the premise. Forty year peace with Dragons, who can take human form, is threatened and two societies come close to war. Female protagonist has a secret that if revealed would bring prejudices against her and has a romance interest. Sounds typical.
However, every aspect of this book had an interesting twist or take. The Dragons are rational & logical creatures with a truly unique culture adding a higher degree of difference than just colour of their skin. I liked how they analyzed emotions and art, sometimes trying to explain or imitate it.
Politics and intrigue kept me guessing while explained enough that I thought I knew what was going on. .
The protagonist is a strong female with trying to fit in with secrets and internal struggles with identity. The way she handles situations is believable and understandable. Handles her romance in a well thought out manner and not just 'blind with love.'
Several times I thought the book was going toward cliches or common trope, especially with the romance but went a different route. Pacing between politics, romance, internal conflict, and back was handled well.
The ending is fulfilling with room for sequels. I won't hesitate to pick up the next one.
Narrators did an excellent job.

Story is great, narration is unbearable.

The story is imaginative and well written, but the narrator is so monotone that it was actually difficult to understand what was going on at times.

There were a few moments when I honestly wondered if it was being read by a computer program.

I'm not able to finish this audiobook. :(

I really tried to like this book. I purchased it based on the rave reviews. Personally I don't see what they were raving about! I found this book to be tedious and long, in fact I couldn't make it half way.

Where does Seraphina rank among all the audiobooks you’ve listened to so far?

I'd have to say where she digs her own scales trying to get them off.

It was wonderful for me to have the main character be a gifted Psalmist!

This book is deep and mature. Exquisite writing. In fact, some of the best recent fantasy writing I've encountered. The author's voice reminds me of Gail Carson Levine.

Wisely, the author assumes you will catch on to her world and doesn't bother trying to explain everything. You just gradually catch on.

It was very interesting for me that at the beginning, the church music that made Seraphina overflow with joy she described as "masculine". I think that is what good church music is -- masculine in a way that is healing and transforming.

Having said that, I find this book to be very feminine. There were some good action sequences, but much of the book, seen through the eyes of Seraphina, deals with the type of negotiations and intense murder attempts found in Royal courts.

The romantic parts of this book were extremely well done and did not degrade into becoming overly bawdy.

The gut wrenching painful things Seraphina feels (both emotionally and physically) from not wanting to have Dragon blood in her veins were very moving. It was something we could all relate to and having parts of ourselves that we wish we could get rid of. But then, God ends up using those parts in our lives.

Overall, as a guy, this book increased my sensitivity to many female issues. I tried to figure out the worldview of the author, but I honestly say that having gotten to the end of the book, that still remains a mystery. Which is a good thing.

Where does Seraphina rank among all the audiobooks you’ve listened to so far?

The best and I have listened to a ton of audiobooks!

What was one of the most memorable moments of Seraphina?

The narrator was awesome! Perfect for this book! I am forty years old and this book had me crying in places. Truly a beautiful wonderous Fairy Tale!

Now this a book about being different

This is a really good story. I enjoy the whole package - the characters are believable and enjoyable. It is a pity it's hidden in the young reader section! This is about being different and then coming to see that you are not the only one and that your differences isn't the most extreme in world nor does it define you but it does change how you are. But this isn't a moral story it's a actual story - enjoy read. My only question is where are more books by Rachel Hartman?

Not a super complex novel, but I enjoyed the authors unique take on dragons. The Audible version was decent, although I wish I could forever the narrator's cringe worthy singing.

Whie I enjoyed this book, I think it was a little to YA for me and maybe what it lacked was some edginess. The dangers just never felt real. Also, and this may have been due to listening to an audiobook as opposed to reading it, but the names of characters, places, ethnic groups, saints, were at times hard to keep track of. i can recommend this.