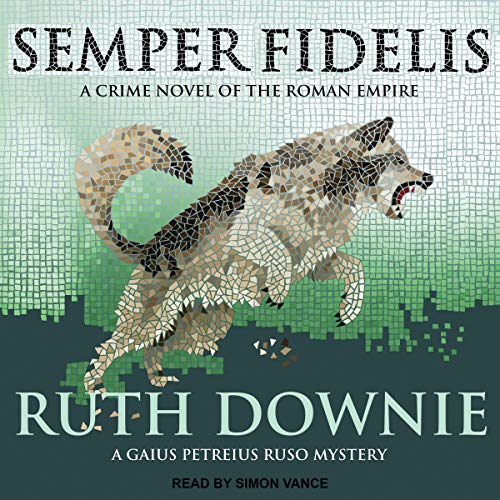 Back at his post as a doctor in the 20th legion in Roman-occupied Britain, Ruso uncovers a new danger even closer to home than the neighboring barbarians.

As mysterious injuries, and even deaths, begin to appear in the medical ledgers, it's clear that all is not well amongst the native recruits to Britannia's imperial army. Is the much-decorated centurion Geminus preying on his weaker soldiers? And could this be related to the appearance of Emperor Hadrian?

Bound by his sense of duty and ill-advised curiosity, Ruso begins to ask questions nobody wants to hear. Meanwhile his barbarian wife Tilla is finding out some of the answers -and is marked as a security risk by the very officers Ruso is interrogating.

With Hadrian's visit looming large, the fates of the legion, Tilla, and Ruso himself hang in the balance.

The series is moving right along with Tilla and Ruso diverted to a posting far away from the Emperor's planned itinerary... in order to run right into the imperial procession. I think this outing features the best mystery of all the books and I'm delighted to say that my favorite character, Tila, is as delightful as ever. I did miss Albanus. Can't he somehow become attached to Ruso so he can stay where the action is? Valens makes a return performance as well as Ruso's arch enemy Mettelus. As always, the dialogue is humorous and the relationship between Tila and Ruso hasn't grown stale at all. It's at the heart of all the books.

All I can do is hope that Ruth Downie is busy working on the sixth in the series. She left us with a slight cliff hanger. Totally recommend.

Downie set the story of Semper Fidelis book 5 of the series, in 2nd century Roman Britain during Hadrian’s rule. The protagonist Gaius Petreius Ruso, a Roman Army Medical officer and wife Tilla, a native Briton are back with the 20th legion. The Emperor Hadrian and Empress Sabina are visiting England. Ruso and Tilla are posted to fortress Eboracum (modern day York) only to find things are going seriously wrong there for the legion’s British recruits. Mysterious injuries and deaths have occurred. Ruso runs into problems with Centurion Geminus when he starts asking questions. Ruso suspects Geminus is preying on the recruits, how, why he set out to find out. Tilla brings to the Empress attention the plight of the recruits. I particularly like the section of the book when the British recruits appeal to the Empress Sabina to accept there petition and help them. They are chanting Sabina, Sabina and the Empress responses to them in such as way to reveal she has had very little attention paid to her. Downie does factually portray the relationship between Hadrian and Sabina. There are many twists, turns and setbacks for the protagonist. The characters major and minor are well drawn. The author does an enormous amount of historical research and weaves this into the story with such a light hand that you’ll hardly notice you’re being educated as well as entertained. I like the authors note at the end of the book providing the historical facts provided in the story as well as the modern day location in the city of York that are presented in the book. There is proof of the abysmal treatment of native recruits to the legions in Britain in the “Vindolanda Tablets” dated from 85 -122 CE they also tell of Hadrian’s visit to Britain in 122 CE. The award winning, Simon Vance does a super job narrating the story.

Not as Good as Earlier Books in this Series

I have read all the books in the series and this is definately not one of the best. I found it dragging in spots. I have really come to dislike Tilla. The story centers about the Centurion Geminus and the death of many native recruits to the 20th Legion.

I think the problem for me in this series is that Tilla is becoming more, and more implausible as a character. I just find her activities in assisting Russo in the murder investigations not really true to the times. Yes Roman soldiers did occasionally marry a "native" woman during their time in Britain but this woman would never have been allowed the freedom to wander around the Fort and snoop the way the Tilla does. Actually at times I find Tilla quite annoying.

The mystery of the deaths of the young recruits is quite a good one, and I suspect not an unusual occurrence. But the laxity of some of the commanders I found difficult to believe. The Roman Legion, even in Britain, was still a pretty well-organized and disciplined machine. But one never sees this in the book. Instead we are given a picture of sloppy, slovenly bunch of recruits and commanders.

The wait was worth it. This might be my favorite of the series. Ruso, the medicus, and his barbarian wife Tilla are as entertaining as ever, though the theme of the story and the main actions are anything but a comedy. Roman Britain comes alive in this story of cruelty, murder and political cover ups. The visit of the Emperor Hadrian and his wife Sabina is especially interesting and led me to do some follow-up reading on the pair. Simon Vance is the perfect Ruso. I can't wait for the next adventure with Ruso and Tilla.

This series is great

whats odd is I never like the new one when it comes out. Its never as good as the last one, which I always come to love. And I love this one now. These stories are a lovely weave of historical fiction, muder mystery, fantasy heroism, and postcolonial politics. For some listeners it may just be a murder mystery with an exotic backdrop, and is certainly enjoyable on that level, but there is a lot more to the narrative if you are open to it. Thats the difference between good and great. These are great. Can't wait for the next one. Do we get to go to Rome ? is Justinus still alive? Will they ever have children? Oh I cannot wait

Why doesn’t the BBC make a series based on these?!

I think the “Medicus” books would make a wonderful series! I love them, and just think of the costuming, the period sets, using actual archeological sites with some clever effects. Something like the Doctor Blake Mysteries set 2000 years ago. How could this not be a success? Anyway, in the meantime I’ll have to use my imagination and enjoy Simon Vance’s wonderful readings of these books. Mind you, if anyone did make a series, I’d first read the books and then see how the film version matches up to what I imagined. These are absolutely delightful books. But I can’t imagine you reading the reviews of this volume and not already being a fan. And if you are not yet a fan, start with the first in the series. And have a great time!

I started with Medicus and felt compelled to listen to the whole series back to back. Wonderful characters and a fascinating period in history, when two completely opposite cultures combined, collided and coexisted in waves of order and disorder. I actually wrote to the author to find out if there would be another installment. She was kind enough to email me back with the good news/bad news: good news - the next book is being edited right now. Bad news - it won't be out til next summer :-(

Nowhere Near As Good As Previous Books

I'm not sure how this one got released because it isn't even close to being in the same league as previous books in the series. The characters that I have come to love, Ruso and Tilla, are just "blah" in this one, as is the storyline. Where is the witty banter between them, not to mention the chemistry? They do spend a great deal of time apart (it's almost written as two different, though somewhat intertwined, storylines), but when they are together, there's just......nothing. Where is the cleverly-written plot? Yes, there were some "interesting events" that Ruso had to suffer through, but for the most part I never got the sense that he was in any real danger. The setting is a training base for new recruits, which I guess doesn't really lend itself to riveting storytelling. I found the plot to be uninteresting and a bit confusing. It didn't hold my attention at all. Maybe I missed some important bits because of this, but at times I found it difficult to follow what was going on. In the end, I didn't really care about why Geminus did what he did nor about what happened to him because of it (don't want to leave any spoilers).

As usual, Simon Vance does a terrific job. He is one of my favorite narrators, which is the ONLY reason I even listened all the way to the end.

If you are a fan of the Medicus series, I suggest giving this one a miss. I was quite disappointed in this book. So much so that I may not continue with the series unless the next one is considerably better.

Better than the prior book

I really enjoyed this book better than the earlier. This keeps moving. More action and twists. If liked earlier stories then you’ll enjoy it.

This is Downie's best yet. Without losing any of the humor of the his tactlessness or inability to "control your wife," the Medicus' character is more consistent with his actions than in the previous books. He has lost the sad-sack bumbling that belonged to a less intelligent character. Humor, horror, and danger are perfectly balanced. I sped through this one, listening every chance I could get, completely absorbed in the all-too-modern politics of the Roman Empire; the characters; and of course, the plot.