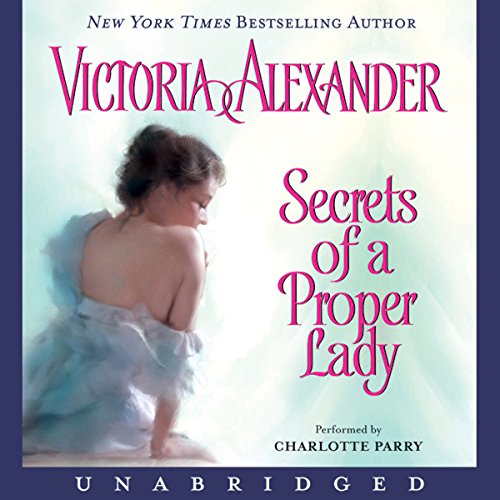 Secrets of a Proper Lady

Charlotte Parry gives a captivating performance of New York Times best-selling author Victoria Alexander's novel Secrets of a Proper Lady. Lady Cordelia Bannister wants to follow her heart, but her father wants her to marry Daniel Sinclair. She disguises herself and meets with his secretary. Meanwhile, Daniel is one of four men involved with a wager to avoid matrimony - he’s nearly won, and he’s been enjoying his time as an eligible bachelor. This is a love story rife with mistaken identities and miscommunication. Will the pair find happiness together?

Lady Cordelia Bannister simply cannot marry a man she has not chosen herself, no matter what her father decrees. So, pretending to be her own companion, she decides to seek out information about her intended by meeting with his secretary, a man who soon beguiles her. But Lady Cordelia doesn't know the truth: the man she can't resist is really her intended, Daniel Sinclair.

Daniel has nearly won the wager he made with three of London's most eligible bachelors. While two of his compatriots have surrendered to the shackles of marriage, he's remained free to woo any woman he chooses. Yet duty forces him to consider Lady Cordelia. And determined to escape honor intact, he continues the masquerade he started.

Each find the other completely irresistible, but when they uncover their mutual mistaken identities, Daniel and Cordelia must make the most important choice of all.

I have mixed feelings about Secrets of a Proper Lady. First, I have to agree with the other reviewers - it was very disconcerting for the hero's voice to be pitched higher than any other character. At first I thought maybe the narrator just didn't differentiate much between characters, and was using her own voice for all of them, but her other male voices were pitched a little lower, and she did seem to have control of all the different character voices. The hero's voice, in fact, seemed even higher and girlier than the heroine's. I tried to get over it - really, the narrator wasn't bad, and she slipped from American to British accents back and forth very fluidly, but sheesh, give us a manly hero, please!

Second, while I enjoyed most of the story, I thought the heroine walked a thin line between feisty/independent and TSTL (too stupid to live) and she stepped way over into stupid at the end, in my opinion. You know the type, where you find yourself saying NO DON'T DO THAT out loud while you listen. That indeed made it go from a solid 4-star to a barely 3-star for me. I didn't quite go as far as ripping the earphones out and yelling, as I have with some (the audio equivalent of a Wall Banger book). It didn't actually ruin the book for me, but it was frustrating.

The tea-party 2nd epilogue didn't quite work for me as this was my first book by this author, but was a fun idea and helped me slightly get over my feelings about the heroine at the end of the book. If you've read several of this author's books already, you might enjoy it more. That is, if you make it that far without ripping your earphones out and yelling...

Almost, but not quite, reaches potential

This is apparently the third book in a series -- there is no need for you to be familiar with the previous books to enjoy this one (I wasn't). The recurring theme is that of eligible men wagering to remain unwed and each succumbing to marriage. This is the romance between American-in-London self-made Daniel Sinclair and his romance with ton-bred Lady Cordelia Bannister.

Neither the hero or heroine want to marry, but have been thrust into potential marriage by their business-oriented fathers who see a benefit in the union. I rather enjoyed the ensuing farce when both hero and heroine decide to masquerade as another person to gather information about their potential intended, and perhaps even to wheedle out of the unwanted commitment. Unfortunately it seemed to go on for too long, and when it resolved it was all a little too pat and a little rushed. The writing was occasionally lazy (repetitious vocabulary), but these lapses were redeemed by some humorous dialogue which kept my attention. I also appreciated that our heroine was smart and independent. I felt a little indignant on her behalf for that being misinterpreted as spoilt and selfish by her family (in particular the male members), but such were the times.

The narration was fairly good -- although the higher pitch voice of the American hero took some time to get used to, almost effiminate, which was a little disconcerting.

I feel this book was almost on the verge of 4 stars, but sadly never quite lived up to potential. I will give this 4 stars, but with the reader-beware that it is at best a 3.5 (but one cannot issue half stars). That said, that puts it above a number of titles I have listened to recently!

For readers of Ms Alexander's books, there is a charming little epilogue that took me awhile to understand as I am not familiar with her titles -- it is a imaginary tea party with the author and her past characters. A cute little thought-scape.

I wish there was a way to get a refund. This book was awful. Nonsensensical, blah, blah... What it made it worst a side from the story is the narrator. Awful, the main character is supposed to be this strapping, American, she (the narrator) made NO ATTEMPT to even try to sound a like a man.

I have to agree with some of the other reviews about the narrators voice. I was disappointed with the author as well as the narrator. This was the first book by Victoria Alexander that I have listened to , and it will have to be my last. I wish I had that credit back. I have listened to about 30 books since November, and this is the first one I felt the need to write a negative review about. The only reason I gave two stars is because I loved the character of Daniel and I liked Cordelia a lot.

A lot of potential, but falls short

Pros:
- Plot (see synopsis) is clever, and does not fall into the annoying pitfalls of the "Big Misunderstanding" romance plots.
- Interesting secondary characters, more appealing that the principles. Would've liked to see more of friends Warren & Oliver.
- Heroine's interest in travel and writing a nice way to "show and not just tell" us that she's independent.

Cons:
-Hero's high voice in narration. Other men in the story have nice deep voices.
-Longer than the plot warrants. A few of the conversations btwn heroine and hero are so similar that I thought I bumped my ipod and was playing an earlier scene.

Bottom line: fun and worth the price...if you can handle the girlie hero voice.

The story was as flat as a pancake. absolutely NO depth to any of the characters, and it was soooooo drawn out! the worst part was the narrator - she had the voices all backwards. her deepest voice was the heroine and her second to highest voice was the hero! that made listening to this flat story very painful. I kept hoping that she would fix it, but alas, no. skip this one.

I absolutely loved this book! The hero and heroine were so funny and very witty. Even though I felt the book could have ended sooner, I was glad it didn't as I wanted the story to continue. This was your typical historical - except there was the "American" aspect. I enjoyed - u will too.

Book 3 of The Last Man standing series (1 A Little Bit Wicked, 2 What a Lady Wants and 4 Seduction of a Proper Gentleman). I really enjoyed this listen - at the start it was just lighthearted fun a mistaken identity and a betrayal but then came attraction, desire, seduction, ecstasy but unfortunately it also led to retribution all this between a spoilt Heiress and a needy American entrepreneur.

It was one of those enjoyable but torturous listens that tempts the devil on my shoulder to say "fast forward to the last few chapters" as I desperately wanted to witness the unmasking, listen to the confessions and find out the ending then go back to my original place within the story - but thankfully the angel on my other shoulder stopped me and so I didn't.

Worth a credit? It's everything you expect from a VA book - fun, romance, a little sex and a crazy storyline filled with great characters that find themselves in absurd but amusing situations - so YES credit worthy but anything under $12 I just buy then save my credits for a more costly listen. I see this has mixed reviews (good job we're all different I guess) but listen to the sample and judge for yourself.