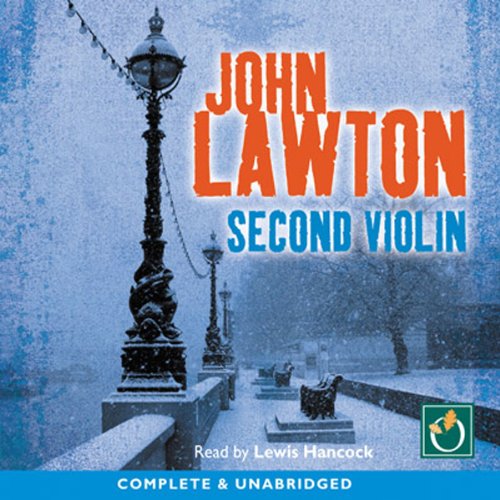 March 1938. The Germans take Vienns without a shot being fired. Covering Austria for the English press is a young journalist named Rod Troy. Back home, his younger brother joins the CID as a detective-constable.

November 1938. Kristallnacht. The Jews leave Vienns - Sigmund Freud with an American escort on a sleeoer train, Josef Hummel tied to the underside of a box car.

June 1940. Seargeant Troy is secinded to Special Branch to help round up the 'enemy' aliens,among whom are Hummel and his brother Rod. Rod and Hummel are interned on the Isle of Man...meanwhile a lunatic is killing Rabbis in the East End of London. Troy asks for time off from Special Branch to return to his true calling...Murder.

"One of the unsung (at least until now) heroes of the genre, as good as LeCarré." ( Chicago Tribune)

History and Mystery, woven together beautifully

John Lawton delivers again on his trademark blending of police procedural and political history set in the WWI and post-war period. We've previously net Bill (not Winston) Churchill and Kruschev among others. Winston is back this time with Harol McMillan in tow and others.

I'd read the earlier books and was casting around for my first ever choice of an audio book. this one made the cut, and it's a terrific choice for several reasons. the chapters, in Lawton style, are short and punchy.

There are lots of voices and a wealth of accents, which providing you have the ear for it (my Mother was English and I live in French Canada), the reader does justice to, as the story moves from toff Brits to cockneys and Lanchashiremen, Nazi SS officers, Austrian Jewish tailors, and Italian restaurateurs.
The story unfolds against the backdrop of the closing days of the peace after WWI, the German Anchluss and 'kristallnacht' and vivid descriptions of beatings of Jews by the SA in Vienna.

It takes a while for us to be reintroduced to Troy, our newly made Scotland Yard man, but he's the same, albeit younger Troy of the later (earlier written) stories. ...and some of the same gorgeous women reappear.

A great introduction to how absorbing a good audio book can be. - Antoine Maloney

There will always be an England

I can not see how other reviewers can rate this so low. This series is trying to bring you British History like the Flashman Series, but at a much deeper level. The author shows us parts of British society reacting to crisis and change during a tumultuous 30 year period. Not quite a British Yoknapatawpha - the streets Inspector Troy walks are real - but close to it. Audible should carry the whole series!!!

I kept expecting the story to go somewhere. It doesn't. The history is somewhat interesting and the perspective of the WW2 (pre, during & some post) times in regards to bigotry and the view of European and other continents on the views toward the Jews is enlightening for most of us who obviously didn't live through those times. But that is all there is. Some made up stories that don't go anywhere other than show the unfairness of those who shouldn't have been treated the way they were due to the prejudices of the times. Author's prejudices comes through many times as well. Not worth the trouble unless you need to learn about the prejudices of the time, the hatred of the Jews of that time period and maybe the mindset of people going through a war.

I read(listen) to books for information, entertainment and not to be talked down to from a speaker's podium when an author inserts character diatribes as a means of pushing his own political agenda. Especially when the author makes motive transparent by inserting a gratuitous ad hominam attack on President George W. Bush totally irrelevant to the time of and the plot of the book while preening through his acknowledgements at the end of the book. London during the Blitz and the characters were absorbing. At times, however it seems the author created more characters than he could control. Several chapters would be devoted to a story line and suddenly the author would move to another group of characters. This is common in this type of writing but in the end I was left feeling that the author had forgotten the story of the bypassed characters and made up for it in a concluding summary of what happened to .... Other than these flaws I enjoyed the book because I treated the author's political posturing as just that. His shopworn socialist comments in the supposed utterances of H G Wells and his communist rantings in the words of a Jewish detainee are understood for what the were -not needed to advancement of the story and empty words to be ignored

It just does not get worse then this

One would think that a $70.00 book would be readable.This one is not. Plot is tenous, reader adds to the unreadabilty, Germans have heavy English accents.I could not finish half the book.Very.very bad.

I found the plot written to be of interest, but the book was not so. The narrator was indeed heavy and hard to listen to, the script equally so. As I listened, I found my interest wandering after 5 - 10 minutes, unable to concentrate on such a story.
I wish I had not wasted my money on such a book.