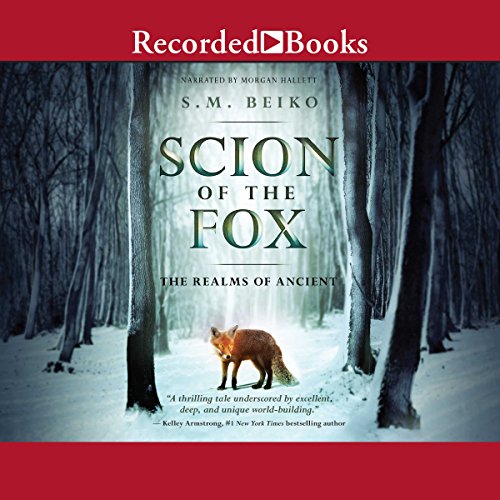 Scion of the Fox

Scion of the Fox

As the winter ice begins to thaw, the fury of a demon builds - all because one girl couldn't stay dead....

Roan Harken considers herself a typical high school student - dead parents, an infected eyeball, and living in the house of her estranged, currently comatose grandmother (well, maybe not so typical) - but she's uncovering the depth of the secrets her family left behind.

Saved from the grasp of Death itself by a powerful fox spirit named Sil, Roan must harness mysterious ancient power...and quickly. A snake-monster called Zabor lies in wait in the bed of the frozen Assiniboine River, hungry for the sacrifice of spirit-blood in exchange for keeping the flood waters at bay.

Thrust onto an ancient battlefield, Roan soon realizes that to maintain the balance of the world, she will have to sacrifice more than her life in order to take her place as Scion of the Fox. This powerful first installment of a trilogy is sure to capture listeners' imaginations everywhere.

I picked up this title on a whim looking for something different from my normal High Fantasy and LitRPG books. Morgan Hallett is one of the better female narrators I have had the pleasure to listen to, the book flowed great and I didn't feel a lack of depth to the novel when she had to portray male characters.

This is a bit of a strange urban fantasy. The world building was great and I enjoyed the prospect of the spirits and origin story she portrayed. The characters have feel and depth and I all around enjoyed every moment of this title. It felt like a simpler fantasy like I would read when I was younger.

There were some pretty dark moments and a lot of growing up for the characters and it was all enjoyable. I highly recommend picking up this title if you’re looking for something different.

Unique and refreshing (at least to me).

I was really pleased to read something that had a lot of new plot ideas, at least they were new to me. I also appreciated how the author wove the story and locale together. The fact that it was set in Canada was a serious bonus for me. Some sections were a little muddled but nothing so severe the it turned em off fo the book. I also liked the fact that it didn't contain insta-love either.

I enjoyed the narrator who made most of the characters ahve different voices, at least for me to be able to follow who was who without issue.

I look forward to other books the author might put out.