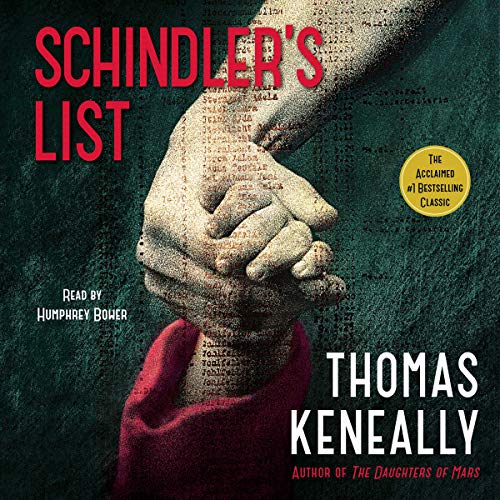 In remembrance of the 75th anniversary of the liberation of Auschwitz and the Nazi concentration camps, this award-winning, best-selling work of Holocaust fiction, inspiration for the classic film and “masterful account of the growth of the human soul” (Los Angeles Times Book Review), returns with an all-new introduction and beautifully redesigned cover.

An “extraordinary” (New York Review of Books) novel based on the true story of how German war profiteer and factory director Oskar Schindler came to save more Jews from the gas chambers than any other single person during World War II. In this milestone of Holocaust literature, Thomas Keneally, author of The Book of Science and Antiquities and The Daughter of Mars, uses the actual testimony of the Schindlerjuden — Schindler’s Jews — to brilliantly portray the courage and cunning of a good man in the midst of unspeakable evil.

“Astounding.... In this case, the truth is far more powerful than anything the imagination could invent.” (Newsweek)

I thought it was a very well written book this was the first time I listened to it I saw the movie years ago I'm half-jewish and always think about what it would be like back then all the poor innocent babies children women and men that had to deal with that. everybody should listen to this book should be mandatory about what's good there is in the world and bad.

Hard to listen to but very well done

This is a story that is very emotional if you have any level of empathy. It is so well written and relays it’s information as a documentary with wonderful narration. To understand the cruelty and compassion of human nature I can think of very few stories to compare. It will take me a while before I’m ready to listen a second time but it certainly is one of the best written stories I have listen to.

Many places hard to read, but everyone who can, should read this brilliantly rendered true story.

Another book that's better than the movie

While the movie is clearly one of the better movies ever (12 Oscar nominations - winning 7), the book paints a much clearer picture of who Oskar Schindler was and what he did to deliver over a 1,000 Jews through the challenges presented to Jews in Poland during WWII.

This is one of the most moving books I've read.

I'll be the first to admit, I wasn't sure what I was getting here. For some reason I thought this was a novel, probably because it was under the classic/ world literature section. Honestly, it should be under the biography section. That way the reader knows what he or she is getting. And being a lover of nonfiction, that is fine. Make no mistake, this is a biography of Oskar Schindler and his work during World War II. Although not officially a biography because the information comes from Schindler Jews, making it an unofficial biography. Or so it would seem.

Humphrey Bower is an excellent narrator, capturing the meaning and feel of the story. All in all, it's a great read. And one that will need to be reread to fully grasp all the intricacies. If one doesn't pay attention it's very easy to get a little lost.

A Must Read for All

This book is exquisitely written and beautifully read. The author has a gift for telling this profound story of suffering and rescue. It’s a must read for all. The story of the Holocaust and those who risked their lives to save the Jews is one that must not be forgotten, or re-written.

STOP if you love historical FICTION

I couldn’t even get past the first two hours of this book. There was no character development and the plot read like someone trying to recount historical events. There was nothing creative about this story, but might be a great read for those who prefer or tolerate a dry historical account.

What can say about such an important and urgent book that has not been said before? I do not want to bash Spielberg's movie, which was a brilliant movie in many ways, but Spielberg missed something important: it is written in a form reportage- factual and quite effective. Listening/reading it was like- chill going my spine all the time. t did not make me feel sentimental in any way or outrageous (the way the movie made me feel) but horrified. Zero humanity in Goeth (once again, in Spielberg's movie he looked like evil and disturbed human, but still human)- a total psychopath in the country run by psychopaths. The performance by Humphrey Bower was brilliant and hit a right note. A.

Although I know the story, watched the movie and am keenly aware of the holocaust, this book made everything more real than any other version I’ve read or seen.

Don't miss this book - even if you saw the movie

This is a remarkable book. So much painful detail. And so much of what I took for cinematic license in the Steven Spielberg movie of the same name is horrifyingly true, derived from the Author's interviews with survivors. It is not an easy read/listen, but every minute is gripping.