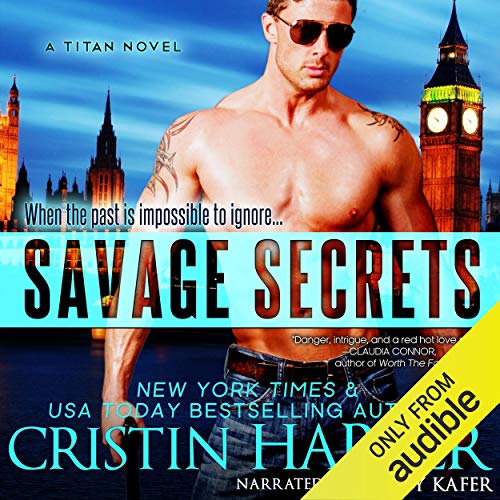 Savage Secrets is the newest title in the USA Today best-selling series!

When the past is impossible to ignore, love may be the only way to survive.

Caterina Cruz has no home. No loyalties. No objection to exacting torturous revenge. Her life's mission is to destroy the terrorist who murdered her family. Then she steps into an elaborate game of charades alongside a Titan Group operative posing as an arms dealer - and her newlywed husband. The sexy distraction may be more than she can handle.

Attacked with a psychedelic drug weeks before, Rocco Savage is plagued with hallucinations that threaten his new rank as Titan's second-in-command. No one knows, and he wants to keep it that way. Throwing him further off his game, he now has a wife with her own secrets he can't crack and an agenda he can't control.

Their mission - an elaborate deception of heated glances and passionate kisses - spins out of control. With Rocco's mind already compromised, can he keep his secret and his distance? And with Caterina's tragic past controlling her every move, can she keep the con up long enough to secure her revenge? Or will both go down in flames?

After the first few chapters I could not stand it. It starts off hopeful but quickly it turns into ridiculousness. I only continued this book because I hate not reading a series in order. It was painful.

I've enjoyed other books in the series so I'm very disappointed. There's no reason to EVER have a rape scene. I stopped listening to the book and I don't know if I'll read her other books now.

No Secret: This Book is Sexy Suspense

Sexy suspense with a heroine equal in strength to the hero. These two were made for one another. Working together, thier story is packed with action, suspense and delicious sexy time.

Be sure to start at the beginning with book one. The whole Titan series is overloaded with testosterone and alpha male hotness. These men can save the world and still have time to seduce a woman and fall in love... and its always great to see a strong man fall.

I review for the Guilty Indulgence Review Site.

It was a good story but I prefer it when consequences of brutality are dealt with realistically. Caterina got over her ordeal in 2 months. Without therapy. Authors: don't have something terrible happen to your protagonist if you aren't willing to explore the long term effects of same. Fyi.

Buyer beware there is a rape scene, I personally skipped. Other then that it was a good book. At some points the leading lady seemed a little to girly instead of the assassin/interrogator she was supposed to be.

Great plot and characters. A good addition to the series.

Note the violence warning - there is one scene that may be triggering re. sexual assault.

Caterina Cruz is the dumbest OPS Specialist Ever

The sold called heroine cannot think her way out of a paper bag. Thought she was going to be a badass and she turned out to be a scared, stupid, child who continually puts herself and the Titan team in danger. I get that Savage fell for her because of her looks but everything else about her was a freaking mess. Why, do some women writers write their female characters with about as much depth, character and smart as a mental challenged turnip? This was a complete disgrace. I skilled to the end after chapter 22 because I was losing brain cells. The epilogue was better than the entire book.

Revenge will cause you to make dumb decisions

This story is somewhat different from the earlier books in the series. The heroine of this frailer than the other woman of the series. The violation that occurred was startling, appalling and vile - an then she makes several unwise decisions. All in all the books is Okay

Jeffrey Kafer is my favorite narrator! Love his voice and how he tells the story!

Very Intense, this one

Rocco Savage is serendipitously paired with special ops interrogator Caterina Cruz, who unbeknownst to him had assisted him in a not so stellar moment. From there, their attraction and need for one another blossoms bot the task they are to complete proves to be more than they can handle and things go awry pretty fast.
This one is intense, emotional and deals with some heady issues. It is not for the faint of heart and may not be for readers who have triggers to sensitive scenarios and forceful scenes... anything more, and I may need to put up a spoiler alert.
As always, Jeffrey Kafer does a wonderful job in his narration of this book.