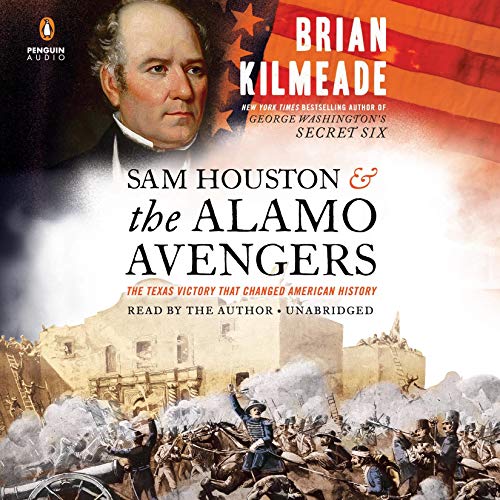 Sam Houston and the Alamo Avengers

Sam Houston and the Alamo Avengers

In March 1836, the Mexican army led by General Santa Anna massacred more than 200 Texians who had been trapped in the Alamo. After 13 days of fighting, American legends Jim Bowie and Davey Crockett died there, along with other Americans who had moved to Texas looking for a fresh start. It was a crushing blow to Texas' fight for freedom.

But the story doesn’t end there. The defeat galvanized the Texian settlers, and under General Sam Houston’s leadership, they rallied. Six weeks after the Alamo, Houston and his band of settlers defeated Santa Anna’s army in a shocking victory, winning the independence for which so many had died.

Sam Houston and the Alamo Avengers recaptures this pivotal war that changed America forever and sheds light on the tightrope all war heroes walk between courage and calculation. Thanks to Kilmeade’s storytelling, a new generation of listeners will remember the Alamo - and recognize the lesser-known heroes who snatched victory from the jaws of defeat.

“A gripping, pulse-pounding tale that’ll have you turning the pages faster than you can say, ‘Remember the Alamo!’ Nobody does history like Brian Kilmeade!” (Brad Thor, author of Backlash and Use of Force)

Loved the story. Well researched. However, you must learn to say Brazos like a Texan to be considered trustworthy.

The writing is great - the presentation was not.

It took me 4 tries to get into the story. The presenter, who is also the author, did not present it well. The phrasing was stilted and emphasis on words sporadic. It was very well written and I would buy the book and read it again.

I really like the book & Kilmeafe, but the tempo & rhythm of his reading takes away from the story. Every time I start to get lost I the story (which I should), he has a pause or breath in a sentence or phrase that should not have any kind of break in it. That breaks the train of thought, interferes with information continuity & distracts from the great story. Again, I REALLY like the author, but I would enjoy the story more with a different reader.

If you have done extensive research on this topic, which clearly you have, you really need to learn how to pronounce the places and names you are referencing. It takes away from your credibility greatly. If a Texan reads the book they will be highly distracted by the pronunciations. If someone is listening to this book that doesn’t know this story or places now you have now taught them incorrectly. Story was good. Narrator cadence and pronunciations made it very frustrating to complete.

just because you wrote it you don't have to tell i

Inspiring biography. Well worth the read (or listen)

Brian Kilmeade is a master storyteller and well researched in his coverage of American hero Sam Houston and the Alamo tragedy. Kilmeade’s audio version is genuine; his historical detail highlights the successes, and failures, of Houston. Transparency and thoroughness matter in biographies and Brian Kilmeade makes the mark across the board. Buy this book and audio edition because they’re worth the price point and knowledge you’ll receive. The dedication to Kilmeade’s mom, and Houston’s mother’s quotes, meant a lot, too. They’re both gentlemen and class acts. Make sure you share with your kids and grandkids. This is a book that matters.

Even a real Texian enjoyed it!

There are many comments about his incorrect pronunciation of Texan words (which is true), but to give him a break, he pronounces just about every word differently than I would! The only two words that made me absolutely cringe were the last name of Tejano hero Juan Seguin (should be Suh-GEEN, hard G); he says Suh-GWEEN. Also our town Refugio is pronounced with an r in the place of the g. (We say Ruh-FURE-ee-oh, not Ruh-FUGE-ee-oh.) And yes, I know that’s not how they are properly pronounced in Spanish. But that’s how they’re pronounced in Texas. Anyway, as a lifelong student of Texas history, I still learned things in this exciting and fast-paced book. I’d recommend it to any American! 🇺🇸

As a Texan having a New Yorker pronouce the names of the places and people from the Texas revolution it was a little funny. Great story overall but I am biased on the topic. God bless Texas.

This is a Short Summary of Accounts

This book is just a summary of the accounts that led to the Texas Independence and becoming its own country. If one is unfamiliar with the war for the Independence of Texas then this is a good book for you to become familiar with some of the players. But if one is interested in the complications as to what led up to the people (to include Mexicans) of the Mexican state of Texas into revolt there are much more detailed and better historical books available. What spurred on the Texan revolt is more important and complicated than the war.

Excellent account of the beginning of Texas. Read by the author, Brian Kilmeade. Excellent book.