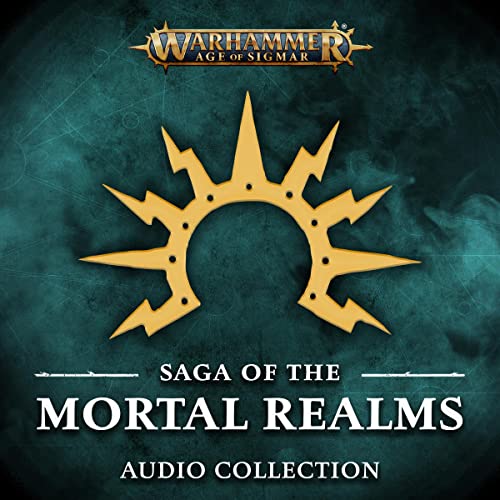 Saga of the Mortal Realms

The Mortal Realms come to life in this audio drama collection. Some of your favourite authors bring you tales of war and eternal struggle for control of the realms in full-cast recordings.

Listen to it because...the balance of power in the Mortal Realms is ever-shifting. Gods, men, monsters and all manner of magical beings vie for primacy in a whorl of violence and politics. Dive into the action and intrigue of Warhammer Age of Sigmar like never before with this collection of full-cast audio dramas written by Black Library stalwarts including David Annandale, Josh Reynolds, Guy Haley and more.

Good and a solid pickup for 1 credit but some of these are out of order. such as beast of cartha

All stormcast all the time

Very well performed, great audio effects. But the description didn't make it clear that these stories are entirely about only one faction, the stormcast. Eventually listening to these Mary Sues go on and on about faith gets old.

numerous time this title became unlistenable do too the background sfx and ambience drowning out the narrarator and the voice actors.

This is a collection of short stories, some better than others, but there are some good ones in here. Honestly this program was done like a radio dramatization. Loved this style! I'd be much more into a lot of the other Warhammer books if they were done this way. If you're going to check any of them out, do this one.

For 1 credit you get a bunch of the short stories. If you want to listen to then but didn't want to pay the absurd price of 1 credit for each 1 hour story, then this is for you. It's heavily Stormcast though so heads up to those who don't like them. I enjoyed this even though the last half of the stories were in the audio drama style (radio show, pre television).

The Rammus, Tarsus, and Mannfred story line is out of order, like the Great Red and Beast of Cartha. Great selection of audio dramas.

loved the first half of stories where it was narrative cross voice acting. the latter half was more only voice actors where the characters self narrated themselves "If only I could flip this table ahhhhh!'' or ''Ha almost got me. take that!'' so on and so forth each time kinda making me suck teeth in second hand cringe. but the story's are still entering