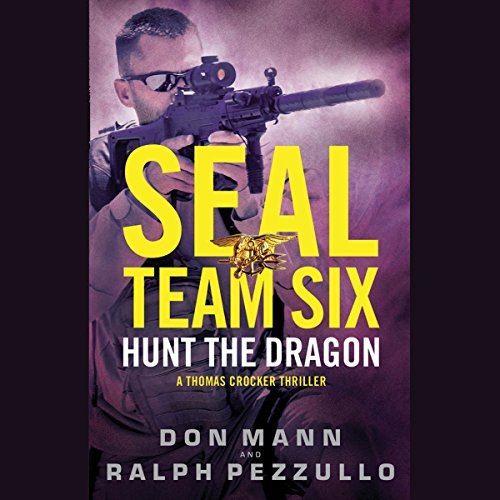 The North Korean government is days away from realizing its nuclear ambitions, and only the heroes of SEAL Team Six can stop it.

Chief Warrant Officer Thomas Crocker of SEAL Team Six's Black Cell is in Las Vegas after conducting a training exercise in the desert with new members of the team. Lounging by the pool at Caesars Palace, he witnesses an argument between hotel security guards and three Asian men in corporate attire that quickly turns physical. Giving chase, he soon corners the businessmen, who claim to be Chinese diplomats under the protection of diplomatic immunity. Except the men don't respond when the head of hotel security - Crocker's old friend - addresses them in Mandarin.

That night someone hacks in to the Nevada Power Company system, and Las Vegas goes completely dark. The businessmen set their hotel suite on fire and escape amid the chaos. At the same time, James Dawkins, a brilliant scientist with top-secret clearance, disappears from a conference in Geneva and wakes to find himself in a North Korean bunker with instructions to solve an engineering problem that will enable North Korea to launch nuclear attacks on its enemies worldwide.

Chasing a trail of evidence that takes them from US soil to international waters to China and North Korea, Crocker and the rest of SEAL Team Six find themselves in the middle of an international plot with dangerous geopolitical ramifications. The North Korean government will stop at nothing to realize its long-held nuclear ambitions - but it'll have to get through some of America's most highly trained warriors first.

"A riveting and accurate description of how special operations units actually conduct counterterrorist operations in the field.... If you are interested in reading a suspenseful, action-filled novel written by the 'real deal' instead of some amateur wanna-be, pick up this book, or any of those in the SEAL Team Six series." (James Blount, former supervisor at the Central Intelligence Agency)

Plodding – while time might pass quickly because we are transported, the story moves sloooooowly because it is hard to get invested in the outcome. Many day dream flashbacks, can’t the author think of another method to share with the reader/listener information? Time after time he uses the same technique, very unsophisticated writing. Incomplete – at times we jump large spans of time without a clear description of what happened in between or how we arrived at a location. The author transports us rather than leading us and enriching the story with details; instead we skip ahead. And so many unfinished strings throughout the story. Unsatisfying – connections to characters are superficial, the story seems superficial, and there is a general lack of intrigue, mystery, suspense, drama – ho hum. Simple – there is no richness or texture to this story, no depth. It is simply told. Bizarre - on many fronts. SPOILER ALERT – When Crocker first meets Cindy her behavior is very sexual – and Crocker takes off leaving her to chase a bad guy. The next time they are together Crocker again takes off to fight the same bad guys without finishing their dinner date yet, that brief encounter becomes an anchor and he is he is thinking of her as his girlfriend and flying her and his daughter on a vacation, busy texting, calling, and she flies out to see him – I mean really? Just bizarre. And when the mission goes south – really there is no rescue effort? Other than a brief mention that Davis is frustrated and punched the admiral we don’t hear anything else? No push by Crocker’s commander? Is this incomplete or just bizarre? Save your credit for a better book.

I did not enjoy all the going back information about his family when he was dreaming.