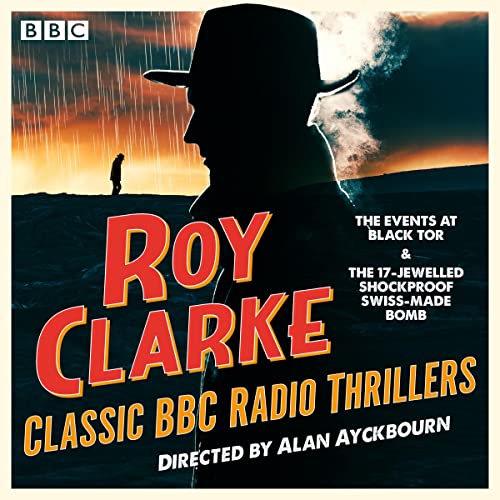 Acclaimed radio and TV dramatist Roy Clarke is well known for his hit sitcoms Last of the Summer Wine, Open All Hours and Keeping Up Appearances. But before he came to fame, he penned two hugely entertaining six-part thriller serials—both directed by a struggling radio producer who would become one of the most renowned playwrights in the world: Alan Ayckbourn.

The Events at Black Tor - When young policeman Jamie is posted to a small village in the Yorkshire Moors, he and his wife Pam are anticipating a nice, quiet life. But the arrival of a curious letter sparks a terrifying chain of events. Aided by Fr Probert, a Dominican friar, the duo come face-to face with the forces of darkness, as they investigate a sinister cult of murderous devil-worshippers.... Brian Peck, Juliet Cooke and On the Buses star Bob Grant are among the cast of this spine-chilling thriller with supernatural undercurrents.

The 17-Jewelled Shockproof Swiss-Made Bomb - History teacher Johnny Shields is hoping for a romantic evening, but when his date is scuppered by a mysterious man in a raincoat, he finds himself unexpectedly recruited for a dangerous Continental mission. Tasked with infiltrating a highly-organised smuggling gang, will he survive long enough to expose them?

Produced and directed by Alan Ayckbourn

The language and attitudes in these programmes reflect the era in which they were first broadcast and may not reflect current attitudes.

The Events at Black Tor