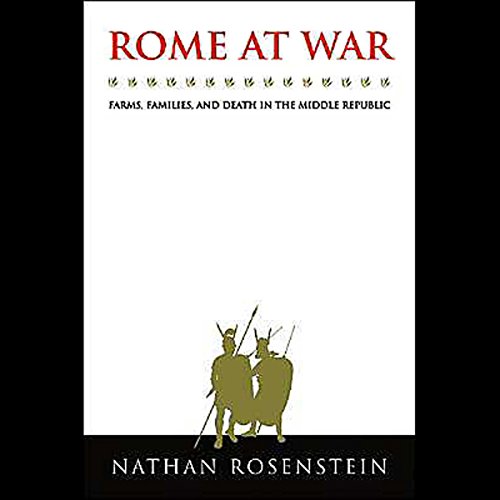 Historians have long asserted that during and after the Hannibalic War, the Roman Republic's need to conscript men for long-term military service helped bring about the demise of Italy's small farms and that the misery of impoverished citizens then became fuel for the social and political conflagrations of the late republic. Nathan Rosenstein challenges this claim, showing how Rome reconciled the needs of war and agriculture throughout the middle republic.

The key, Rosenstein argues, lies in recognizing the critical role of family formation. By analyzing models of families' needs for agricultural labor over their life cycles, he shows that families often had a surplus of manpower to meet the demands of military conscription. Did, then, Roman imperialism play any role in the social crisis of the later second century B.C.?

"Represents a much needed re-evaluation of the impact of Roman warfare on agriculture and the Roman 'peasant class' during the third and second centuries B.C." (Journal of Roman Studies)

Rome Under the Reign of the Quants

To begin with, this is a peculiar choice for an audiobook, and while I rather enjoyed it, caveat emptor. It is a highly technical demographic study of farming and conscriptions in the period leading up to the tribunal of Tiberius Grachus, filled with lusty, uninhibited data crunching. Good for students, specialists, born nerds, or anyone interested in methodology, but a far cry from the drama of Gibbon or HBO. The reader has a good, youthful, even voice that helps, and he keeps at it manfully. But he tends to mispronounce a few of the ten-dollar words (I did say "youthful") and for a few quantitative stretches he might as well be reading a credit card bill. I know nothing about Roman history and am not qualified to judge the research. The demographics of the Gracchan reforms are highly charged ideological material. Leftists see Tiberius Gracchus as a hero of class struggle, while conservatives see him as the Hugo Chavez of the ancient world, an unscrupulous populist who set Rome on the path to tyranny. (There is no fouler insult than "You Gracchi!" at the Cato Institute, no doubt.) As a leftist, I was and remain a bit suspicious of new histories of the period, given today's orchestrated right-wing efforts in America to rewrite the history of the depression and New Deal. This work seems good, interesting, and not overtly ideological, but it will undoubtedly provide conservatives with "hard facts" for retrospective culture wars. I am not sure what I think about such quantitative approaches. No matter how carefully the author qualifies his material and points to deficiencies, "data" has psychological impact and a long afterlife. My own purely amateur sense is that the many contingencies, unknowns, and variables involved in such models do not warrant the sense of certainty we tend to ascribe to the numerical output.

Even for an ancient history buff, this is boring

This book is extremely quantitative -- imagine someone reciting to you the reams of data they collected for their PhD thesis. Furthermore, the author relies heavily on long-shot estimates and attempted modelling of behavior that took place over 2000 years ago. Even for someone like me who loves ancient Roman history and likes academic history books, this is extremely difficult to listen to. I found myself wondering when it would be over so I could listen to something else.

Really interesting book, but the narrator....

This is not an easy listen because it is a highly analytical history book. The book itself is quite interesting and an accomplished narrator could handle it well, but Rene Ruiz is a bore. Better to just read the book.