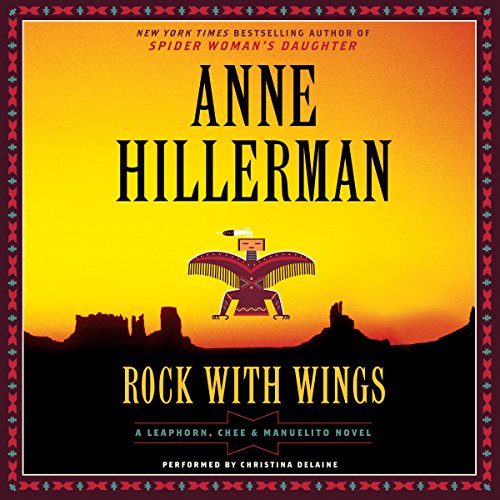 Doing a good deed for a relative offers the perfect opportunity for Sergeant Jim Chee and his wife, Officer Bernie Manuelito, to get away from the daily grind of police work. But two cases will call them back from their short vacation and separate them - one near Shiprock and the other at iconic Monument Valley.

Chee follows a series of seemingly random and cryptic clues that lead to a missing woman, a coldblooded thug, and a mysterious mound of dirt and rocks that could be a gravesite. Bernie has her hands full managing the fallout from a drug bust gone wrong, uncovering the origins of a fire in the middle of nowhere, and looking into an ambitious solar energy development with long-ranging consequences for Navajo land.

Under the guidance of their mentor, retired Lieutenant Joe Leaphorn, Bernie and Chee will navigate unexpected obstacles and confront the greatest challenge yet to their skills, commitment, and courage.

Officer Bernie Manuelito and Sergeant Jim Chee start a brief vacation when two cases cause them to forgo the vacation. Chee has a case of a missing women and a mysterious mound of dirt and rocks. Bernie is managing the fallout from a drug bust gone wrong. She uncovers the origins of a fire in the middle of nowhere. She is also looking into an ambitious solar energy development with consequences for the Navajos. All the while she is dealing with her sister’s drinking problem.

The book is well written and researched as to Navajo culture. The descriptions of the four corners area are excellent. Anne has kept the book authentic, but she has put her own signature on it. She is not duplicating her father’s style but applying her own style to the series. She features Bernie Manuelito more than Chee or Leaphorn. She has managed to keep the flavor of her father’s stories while inserting her own. In this story the author had a bit of a problem with the plot. It appeared a bit formulated. Her prior book had a better developed plot. I am looking forward to seeing what she does with the next book.

The book is about ten and half hours long. Christina Delaine does a good job narrating the story. Delaine is a voice over artist and audiobook narrator.

Another great book by Anne Hillerman. So glad she has continued the Chee / Leaphorn books. The stories have been seamless and just as exciting.

The Navajo Police save the day again

The story follows the line of the other Hillerman novels with all the characters that we love. The reading of the Navajo words and accents of the Navajo people were very distracting to me. I wish they would find a native reader for these novels!!

No Native Americans for narration?

Ms Hilerman does a good job carrying on stories in her father's style. I enjoyed the story, but had great difficulty with the narrator. I know she is an accomplished performer, but lacked the ability to carry off the Navajo characters. are there no Native American, especially Navajo, narrators? surely Ms Hillerman could find one?

Happy to See Anne Picking up where her father left

Where does Rock with Wings rank among all the audiobooks you’ve listened to so far?

One of the better ones.

What other book might you compare Rock with Wings to and why?

Any Tony Hillerman novels. Picking up with characters her father created Anne keeps you from wondering "what ever happened to Chee and the others.?

Have you listened to any of Christina Delaine’s other performances before? How does this one compare?

Navajo mystery the next generation.

I enjoyed the book. Though not as detailed in Navajo culture, still a good story and nice to hear a woman's take on the characters.

What would have made Rock with Wings better?

Having a different narrator would have helped. I have never given a narrator a poor rating before and I have listened to dozens of books, but this narration was really bad and made most of the Native-American characters sound dim-witted. The writing was also disappointing and predictable. Some of the lines were dreadful.

Has Rock with Wings turned you off from other books in this genre?

Disappointment. I love the characters and was looking forward to the book.

Good but too slow

Enjoyed the glimpses of Navajo culture and beliefs, but the plot moved a bit too slowly with the main characters asking themselves the same question over and over.

Would you ever listen to anything by Anne Hillerman again?

Maybe, I love reading about the Southwest. I looked forward to listening to this book but was very disappointed.

The narrator read the conversation in a slooooooow "Native American" dialect...giving the wrong impression of her characters.

What the Hell is Wrong With Anne Hillerman?

I guess my expectations were too high

I got bored and didn't finish the book. The family issues were realistic but tedious. The male protagonists seemed interestingly stereotypical characters rather than real people.