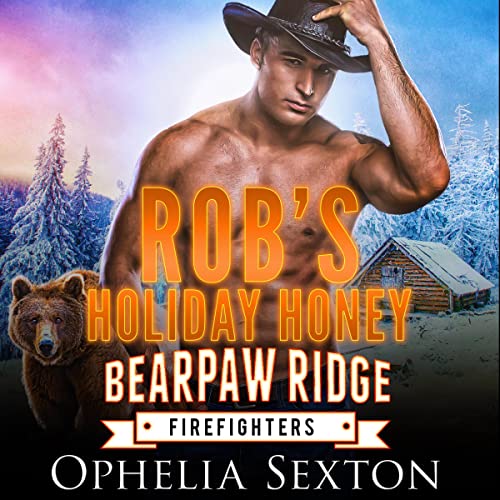 A bear shifter finds himself stranded in a snowed-in cabin with a runaway bride...and there's only one bed.

Bear shifter and volunteer firefighter Rob Jacobsen-Swanson has been away from home for months. All he wants to do now is make it back to Bearpaw Ridge in time to celebrate Christmas with his big family. But fate has other plans.

After he gets in a car accident in the middle of a raging blizzard, he finds himself stranded in a tiny cabin with a runaway bride who hates him on first sight. Sure, she's curvy, pretty, and would make the perfect armful on a cold winter night. Unfortunately, her personality is as prickly as her body is cuddly.

So, of course his bear decides she's his fated mate. Can he be any more screwed?

Some of my Favorite Tropes - Holiday Shifter Roman

Rob is surprising his family by coming home for Christmas. When his truck breaks down, he will be ok because he can turn into his bear and handle the snow storm traveling cross country to his home. When A beauty in a wedding dress wrecks her car - he must stay and take care of her in the storm.

Cute and witty story of survival and explaining your bear! The narration for the is excellent.

A well written book with great characters. Narrator did an awesome job.
I was given an audible copy and voluntarily leave this review.

Sweet Romantic Tale that I found entertaining and amusing as the chain of bad luck situations just kept finding this lovely girl on her wedding day. I liked that even though the events were bad the whole book had a positive spin and I never felt negative emotions, apart from wanting to deck a certain man. Recommended. Nicely narrated.