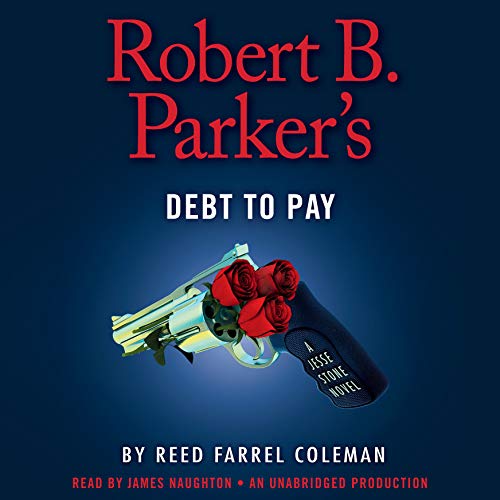 Robert B. Parker's Debt to Pay

All is quiet in Paradise, except for a spate of innocuous vandalism. Good thing, too, because Jesse Stone is preoccupied with the women in his life, both past and present. As his ex-wife, Jenn, is about to marry a Dallas real-estate tycoon, Jesse isn't too sure his relationship with former FBI agent Diana Evans is built to last. But those concerns get put on the back burner when a major Boston crime boss is brutally murdered. Despite all evidence to the contrary, Jesse suspects it's the work of Mr. Peepers, a psychotic assassin who has caused trouble for Jesse in the past.

Peepers has long promised revenge against the Mob, Jesse, and Suit for their roles in foiling one of his hits - and against Jenn as well. And though Jesse and Jenn have long parted ways, Jesse still feels responsible for her safety. Jesse and Diana head to Dallas for the wedding and, along with the tycoon's security team, try to stop Peepers before the bill comes due. With Peepers toying with the authorities as to when and where he'll strike, Jesse is up against the wall. Still, there's a debt to pay and blood to be spilled to satisfy it. But whose blood, and just how much?

RB Parker would have not written this.

What would have made Robert B. Parker's Debt to Pay better?

Story line was not topical to anything that Parker would have written. To be truthful this was much more like a Steven King book.

He didn't have much to work with.

What character would you cut from Robert B. Parker's Debt to Pay?

It doesn't matter it not a Parker book.

I really don't know how good of bad this book is, what it is, is Robert B Parker characters and put them a different authors book.

Bring back Michael Brandman or retire the series

First, let it be said that James Naughton delivers a remarkable performance consider the material from which he had to work.
The 15th book in the Stone series is the third by Reed Farrel Coleman. Coleman took over writing duties from Michael Brandman, who handled the screenplay for the Tom Selleck made-for-television versions of the Jesse Stone books. Brandman and Selleck understood Parker's Jesse Stone, and the subsequent books and narrations were superior. In fact, Brandman may have even done a better job with the books than Parker himself.
"Debt to Pay," which is a sequel to book 13, "Blind Spot," does little justice to the Parker franchise.
"Blind Spot" was one of those books that when you hit pause, you might never hit play again. In fact, I didn't. I realized part of the way into "Debt to Pay" that I never finished that book.
I've gotten about half-way through "Debt to Pay" and it's flow is so aggravatingly slow that I'm returning the book to Audible.
The plot is borrowed from a bad plot from which to begin. It's far-fetched, filled with cliches, and poorly organized. I found myself thinking that the plot was almost as if someone said, "Coleman, you have to write one Jesse Stone book every year." To which the author responded, "Oh, okay, I'll have it to you in a couple of weeks."
Essentially, I believe the plot is thoughtless, contrived and poorly executed. I could not finish the book. "Blind Spot" was equally poor, but I thought Coleman's second book, "Killing the Blues" showed some promise.
I noticed when I downloaded it, all of the reviews--there were only half a dozen--were 2-star overalls. I should have taken greater heed.

A Great Addition to the Series

If you could sum up Robert B. Parker's Debt to Pay in three words, what would they be?

Jesse Stone. He is the series character, of course, but the author does a good job of taking him back from where others in the post Parker writings did. Where Jesse was cleaned up for awhile, Coleman has him back to a character struggling with life, including a relationship to his ex wife, and drinking. Both of these make appearances in this novel, but really only add to Jesse as a character as a whole. If Parker could have come back to write one more novel, I would believe this was his!

Which character – as performed by James Naughton – was your favorite?

Jesse Stone, again! I assume that is an important piece when obtaining a narrator; that they can "voice" the main character. As the author draws Jesse as a complex character, James Naughton is able to play him well.

Even though there is the "bookmark" feature in the audible app, I am usually driving when I listen so I cannot stop to mark, but I recall more than one time saying "wow" at the way the author set a scene. This is very well written, and with care. I did not feel that Coleman was stealing Parker's creation, but was giving the fans what they might want.

I love how, unlike some in the post-Parker series, this novel makes an effort to grow a bit. Characters we have known for awhile are no longer frozen in time, and are aging, and entering into relationships or vocational changes. I cannot say more, lest I spoil anything.

I always hear “Audible hope you enjoyed this...”. I didn’t. Jesse Stone has always been a tortured character. This ending was just too sad.

Good story and an easy read. Some what surprised at the ending Stone loses again!

James Naughton contributed much to my enjoyment of this story. Not to spoil the read for others but I did not like Farrel Coleman's ending. So, I'll rewrite it in my imagination.

What did you love best about Robert B. Parker's Debt to Pay?

Which character – as performed by James Naughton – was your favorite?

I found this book very good, interesting story. The narrator is kind of boring though. His reading is kind of dry. You need to get someone else to read, someone like Michael Prichard or Scott Brick.

Finished this one much too quickly. It was a great listen and this reader brings Jesse to life!